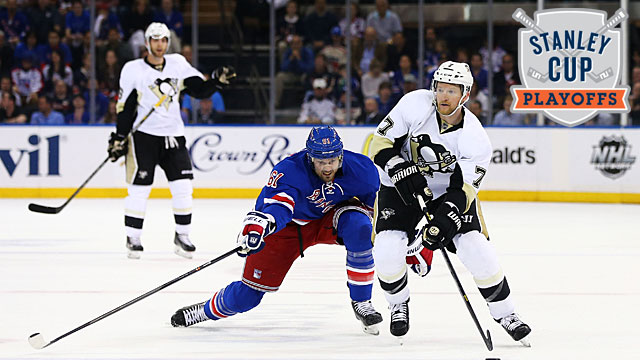 Rick Nash watch: Day 25. Two more shots on goal Sunday night against the Penguins. That brings the total to a league-leading 51. Yet still no … what do they call those things? Where the puck goes in the net and the red light goes on? It’s been so long, nobody can remember.

Luckily for Nash, misery loves company. And the Rangers winger has plenty of company around the league in the “struggling superstar” club. Here’s a look at one player from each of the eight remaining teams who is mired in an offensive drought.

Max Pacioretty, Montreal Canadiens
Montreal’s leading scorer doesn’t exactly have a long résumé of postseason success. His only prior playoff experience came last season, when he went pointless in four games, and he’d managed just a lone assist through the first three against the Lightning in the opening round. But he seemed as if he may have finally broken through when he scored the winning goal in Game 4, helping the Canadiens complete the sweep and setting up a second-round matchup with the Bruins.

But so far Boston has shut him down; he’s had no goals and two assists over the first five games. The Bruins have a habit of doing that — there may not be a team that’s better at it, and Pacioretty himself has acknowledged that Zdeno Chara is dominating their matchup. That can’t be an easy admission to make given the two players’ history, but it’s the reality.

Tonight’s Game 6 is in Montreal, meaning the Habs can use the last line change to try to get Pacioretty away from Chara (though the Bruins are generally very good at countering that strategy). If he can get going, Montreal has a decent shot at extending the series to a seventh game. If not, fans and media in this market will make sure he hears about it.

Mike Richards, Los Angeles Kings
Richards has been held to just three points through 11 games. That’s nothing to write home about, but it’s also not the sort of thing that would ordinarily cause Kings fans to panic. After all, Richards hasn’t been a top scorer since he arrived in L.A. Instead, he’s built on his reputation as a solid two-way player who plays tough minutes against the opposition’s best players. You’d like to see him chip in offensively, sure, but you can live with lower scoring totals as long as he’s holding his opponents in check and making the players around him better.

But Richards hasn’t really done that, either; through the postseason, he’s yet to be on the ice for a 5-on-5 goal for (but has been on for five against). He has been on for more 5-on-5 shots for than against, which suggests he should be OK once the percentages start to even out. The question is whether the Kings will be able to last long enough against the surging Ducks for that to happen.

Ryan McDonagh, New York Rangers
Nash’s 24-year-old teammate is coming off a season that saw him post a career-best 43 points while earning some Norris consideration and being named the Rangers’ team MVP. But he’d struggled during the playoffs, going pointless through the Rangers’ first 10 games before finally getting on the scoreboard with an assist in Game 4 against the Penguins.

He followed that up with a goal and an assist in Game 5, and more important, the Rangers’ power play that he quarterbacks got back on track after an 0-for-36 drought. Slump over? Maybe, though McDonagh was pointless again in Sunday night’s Game 6 win.

Matt Moulson, Minnesota Wild
On the one hand, the Wild gave up a decent package to get Moulson at the trade deadline, and his one goal and three points in two playoff rounds have to be considered a disappointment. On the other hand, he’s been battling an injury that was serious enough to keep him out of the lineup for Games 4 and 5, so the lack of production may be understandable.

Are Wild fans worried about Moulson? I don’t know. Let me go check with the hundreds of them who have been gathered on my front lawn ever since this post went up.

[Peeks head out of window.]

Hm. Apparently the consensus is “Come on out here so we can burn you at the stake, you Blackhawk-loving idiot.” I’m going to pencil that in as undecided.

James Neal, Pittsburgh Penguins
You were expecting Sidney Crosby here, weren’t you? You could certainly make a case for the Penguins captain, who has just one goal in 12 games. But despite his goal total possibly being the single most dissected stat of the playoffs, Crosby’s been playing reasonably well, and has nine points — good for a tie for 12th in the league. Plenty of guys would love to have a slump like that.

So instead, let’s give Pittsburgh’s spot to James Neal, who goes into Tuesday’s Game 7 with just two goals and four points. And those totals may actually be flattering, since his only goal against the Rangers was a bit flukey.

Neal’s averaged right around .50 goals/game over the last three regular seasons, so you’d expect him to get going soon. The Penguins hope it happens Tuesday, because if not, “soon” might turn into “next season.”

Saku Koivu, Anaheim Ducks
Unlike some of the other guys on this list, Koivu isn’t a top-line player — at least, not anymore. After 18 seasons, Koivu is solidly into the “veteran depth guy” stage of his career, providing leadership and defensive know-how on a relatively young Ducks team, but not much offense (he had 29 points on the season).

Still, even by those standards, his one point through 10 games has been disappointing. He’s playing well in his own end, and so far that’s been enough to keep him in the lineup. (Remember, Anaheim gave fellow veteran Teemu Selanne the healthy scratch treatment in the first round.) But with the Ducks locked in a tight, low-scoring struggle with the Kings, an occasional goal could go a long way.

With Koivu still seeking his first career Stanley Cup, seeing him recapture a little of his old offensive magic would make for a great story. Until then, he seems happy to stay focused on the wins.

Patrick Sharp, Chicago Blackhawks
Sharp’s been one of the league’s most consistent goal scorers in recent years, scoring between 33 and 36 in four of the last six full seasons. He also cracked double-digit goals in both of the Hawks’ recent Cup runs. But it’s been slow going so far this year, as he’s managed just two goals and six points through 11 games.

The good news is that Sharp, who had two assists in Sunday’s Game 5, actually had more success against the Wild than he did in the first round against St. Louis, where he managed only one point in six games (though in fairness, that one was a pretty big one). And his slump isn’t exactly hurting the Hawks, who are still outshooting and handily outscoring the opposition with him on the ice at 5-on-5.

That’s not bad for a third line, which is where the trio of Sharp, Marian Hossa, and Michal Handzus slots in for the Blackhawks. If Sharp and his linemates can start chipping in even more offense, the Blackhawks should still be a good bet to move on to the third round.

David Krejci, Boston Bruins
Krejci led the Bruins with 69 regular-season points, and was one of only nine players in the league to hit the 50-assist mark. But he’s been limited to no goals and three assists through Boston’s first 10 playoff games.

That slump has turned into an unexpected subplot of the Bruins’ playoff run, since Krejci had developed a reputation as one of the league’s better postseason performers. He’s led the league in playoff scoring in two of the last three years, recording 23 points in 2011 and another 26 last year.

So how do you explain a guy going from playoff sure thing to struggling dud in one year? One explanation, and this theory could probably be applied to just about everyone on this list, is that he’s hampered by an undisclosed injury. Perhaps a better one is that we just shouldn’t read too much into postseason history, good or bad — sometimes a streak is just a streak, no matter how much we may want to build a mythology around it.