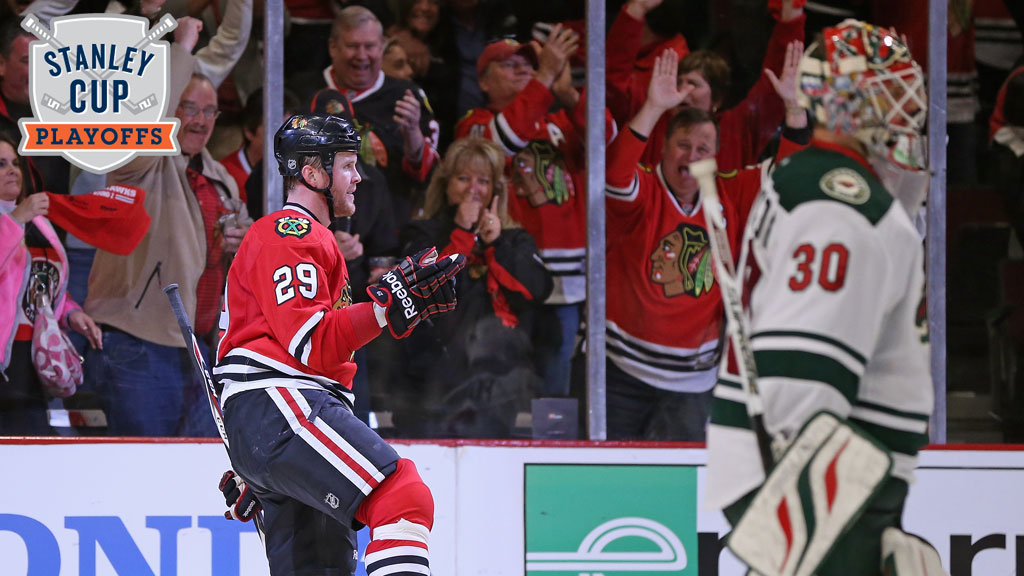 The Minnesota Wild were a great first-round story, beating the heavily favored Colorado Avalanche in overtime of Game 7 to become the only 4-seed to advance. But that win earned them an even tougher matchup in Round 2 against the defending champs. And so far, the Chicago Blackhawks have handled them easily, winning the first two games by a combined score of 9-3 and looking like a team that’s going to sweep this series easily.

So can the Wild find another miracle? Can they actually come back and win this thing?

No. No, they can’t. See you tomorrow.

[Note from editor: We were actually kind of hoping for more than 100 words on this one.]

Ah. OK, sure. No problem. Let’s try this again.

Huh. This is shaping up to be a tougher post than I thought.

But I’m always up for a challenge, so let’s look at it from this angle: If the Wild have any hope of winning this series (they don’t), where would it come from? What would need to go right for Minnesota to pull off a second consecutive upset?

If we’re going to see another Minnesota Miracle, here are five ways it could happen.

They win the goaltending battle

If the Blackhawks have anything approaching a weak spot in their lineup, it’s in goal. Even with his Cup ring, Corey Crawford is typically viewed as a solid, reliable goaltender who slots in a notch below the league’s elite. (Hawks fans would disagree with this assessment, but that’s why they’re Hawks fans.)

So if you’ve got one of those top-tier goalies, you should have an edge against Chicago. That’s not great news for the Wild, though, who are relying on the notoriously inconsistent Ilya Bryzgalov. That would be the same Bryzgalov who struggled in the Colorado series, lost the starting job to rookie Darcy Kuemper, and then had to go back in when Kuemper was hurt late in Game 7. His numbers so far this postseason are ugly, but the Wild don’t have any other options. Josh Harding and Niklas Backstrom are still out. The backup is now John Curry, a minor league veteran who’s never played a minute of NHL postseason action. Byrzgalov is all the team has left.

They run the table at home

This probably falls into the “goes without saying” category, but the Wild need to win tonight. Yes, the Kings just pulled off a comeback from being down 3-0 in a series, but the Wild aren’t the Kings. They need a win tonight, and they’ll almost certainly need to follow that with another win in Game 4.

If they can pull that off, they go back to Chicago with the series tied 2-2 and we’re dealing with a best-of-three. Add in another home win in Game 6, and the Wild would be left needing to steal one of two in Chicago. That’s no easy task, but it would give them a puncher’s chance.

The good news is that the Wild were a very good home team this year. They went 26-10-5 in the regular season, the seventh-best record in the league, and they added three more home wins in the first round against Colorado. Meanwhile, the Blackhawks are a surprisingly weak team away from home. At 19-14-8, they were the only one of the league’s 10 best regular-season teams to lose more on the road than they won. And both of their first-round losses against the Blues came in St. Louis.

The return of Matt Cooke

You remember Matt Cooke. The longtime Canucks and Penguins agitator turned first-year Wild winger. Noted headshot specialist. The player who spawned a thousand “he’s a changed man” stories, right up until he stuck out his knee and we all decided he hadn’t changed after all. Probably the most-hated player in the league. Hasn’t been seen since Game 3 of the first round, thanks to a seven-game suspension for blowing out Tyson Barrie’s leg.

Well, Cooke’s back in time for Game 4 on Friday. Or at least he’s eligible to be back — there’s no guarantee the Wild will dress him, though now would seem like an odd time to try to stake out some sort of moral high ground. So the chances are he goes back in, and maybe his comeback could be a series turning point.

OK, that’s probably stretching things — after all, this is a guy who had 28 points in the regular season. He’s not exactly a game-changer. But he is the oldest player on the Wild playoff roster, with 100 career playoff games and a Stanley Cup ring, and on a young team facing some serious underdog status, a little experience never hurt.

And more importantly, he could help the Wild exploit one of the Hawks’ few weaknesses …

They earn a special-teams edge

Cooke is the sort of guy who makes players on the other team want to punch him. And given how badly the Wild are outmatched 5-on-5, getting a few bodies into the Blackhawks’ penalty box may be their best hope. Chicago’s penalty kill was a very average 81.9 percent this season, good for 19th overall, but it mitigated that by taking the sixth-fewest penalties in the league.

The Blackhawks are a well-disciplined team, in other words, and the Wild will need to try to change that. Embrace your dark side, Matt Cooke. It might be your team’s only hope. (Just try to leave everyone’s ligaments intact this time.)

They get very lucky

Maybe an unlikely playoff hero heats up. Maybe the Blackhawks suffer a string of key injuries. Maybe the Wild go on one of those crazy runs of overtime success. Maybe Patrick Kane gets bored and decides to start shooting at the Chicago net just to make things challenging.

None of those things are especially likely, and even if they all happened, it still might not be enough. The Blackhawks are a team stacked with talent and playoff experience, and they’re riding a hot streak. They may be unbeatable right now.

But the Wild can’t think that way, and Wild fans won’t want to. So you look for whatever positives you can find. After all, a slim chance is better than no chance.

It can be done. It’s not impossible. The Wild are still alive, and they’ll stay that way until the Blackhawks can beat them for a fourth and final time.

So, let’s just go ahead and pencil that in for Friday, then.