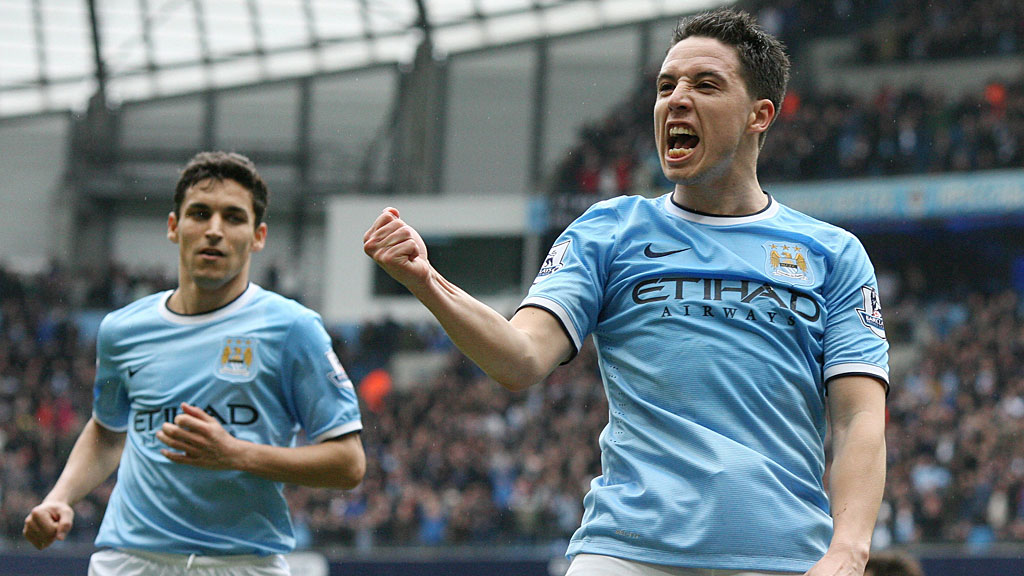 It was a goal, one of many. Vincent Kompany took the ball out of the center circle. Jesus Navas was loitering ahead on the right wing, totally unmarked. No man is an island, John Donne says, but Donne never saw Navas play against Southampton. Kompany rolled the ball up to his Spanish teammate, not with any real urgency — their Manchester City side was already up 3-1 at home, with 10 minutes left in the match — but just, you felt, to get his winger re-involved with mankind. Navas ran onto the pass and flicked a casual cross into the area. The ball did that juddering scythe thing it does sometimes, skipping ahead of three defenders by a few inches each. Southampton’s goalkeeper, Paulo Gazzaniga, tried to fall on it and failed. So it dropped at the feet of City’s Stevan Jovetic, who dinged it into the empty net. 4-1. From the center circle to the goal, the ball was touched three times. Ask not for whom the bell tolls; it tolls for midtable Premier League defenses.

It was a goal. If Norwich City or Crystal Palace had scored it, their fans would be crowing for a month. But for Manuel Pellegrini’s 2013-14 Manchester City team, its only distinction is that it happens to be the most recent in the long, blazing line of fiery gasoline canisters the club has strewn on its opponents’ front lawns — 135 goals in all competitions, the fastest English team to hit 100. Like Liverpool, whom City plays this Sunday in a match that will go a long way toward determining the Premier League title, Manchester’s junior club has spent the whole year dispensing hard life lessons to any lunkhead dumb enough to play defense against them. But while Liverpool have been a fairly simple story this season — fun overachievers aim to recapture lost glory — Manchester City have been something more complex. I don’t know; maybe any team whose billionaire oil-sheikh owner bought it from the deposed prime minister of Thailand is bound to come with some subclauses. But this year it’s as if Manchester City have finally turned into the club it was supposed to become way back when Sheikh Mansour took over, in the misty Cimmerian prehistory of 2008.

Quick theory for you here. An attack in soccer is like a baby turtle. You know baby sea turtles, those little guys? They hatch on dry land, in nests on the beach. After they’ve nosed their way (adorably) out of their eggs, they have to get to the ocean. Only the ocean is maybe 20 yards away — 20 yards of bare sand, policed by predators who are waiting for exactly this moment. For a lot of hatchlings, it’s a sweet, tentative scramble toward certain death, which should definitely sound familiar if you’re an Arsenal fan. It’s like, ohmigodohmigodohmigod almost there I hear the water almost there and then BAM, seagull strike. I feel the surf I feel the surf I’m safe I’m going to make it and then POW, crab attack. As few as 1 percent of sea turtle hatchlings survive to adulthood; a good proportion of the rest become nature’s Snickers bars for the whole rogue’s gallery of beach-dwelling douche-creatures. Snackers gonna snack.

My point is this: It is way, way easier to be a defender in soccer than an attacker. A guy trying to exercise precise control over a ball he can’t touch with his hands is helpless prey, in most circumstances, for a guy who only needs to thunk the ball as hard as possible. Most attacks die sharp-beaked deaths a long way from the sea. The ones that do make it tend to look fragile and fortunate. Baby turtles don’t have master plans.

Got that? OK, now imagine you’re one of the richest humans on earth, a hereditary oil prince from a family that controls tens — if not hundreds — of billions of dollars. You’ve decided to buy a soccer team, not so much for the investment potential as for the public show of might. You’re taking one of the prized entertainment assets of an old colonial empire and turning it into a plaything, using it to paint a victorious face on your particular brand of postmodern fossil-fuel royalty. You dispatch a wild-talking media lieutenant known as the “Donald Trump of Abu Dhabi” to represent you in the press, and when his extravagant claims go too far, you replace him with a more conservative executive who conservatively talks about your homeland like this:

Above all, you’re doing it because you can. You’re demonstrating to the world that nothing can oppose you. You’re too smart. You’re too rich. Nothing can stand in your way.

So, question: Are you, in this scenario, remotely interested in baby turtles? I mean, of course not, right? You’re not looking to construct a prudent squad that’s organized at the back and that scores on the odd counter. You’re looking to terrify the world with your reign of unstoppable fire. You want six goals a game. There’s a reason buying Ronaldo was such a symbolic goal for City in the early sheikh-ball era: Not only was he the ultimate luxury good, the $10,000 appletini of attacking wingers, he also belonged to Manchester United, City’s eternal bully and crosstown nemesis. Buying him would have been the move not just of an ambitious club but of a club unlike anything the world had ever seen. It would have signified City’s determination to forge a squad of mutant hatchlings who, when the seagulls came to strike, would have ripped them right out of the air.

Ronaldo was never a possibility, of course. But City spent fantastic amounts of money, absurd amounts of money, in pursuit of this ideal — more than a billion dollars’ outlay in the Mansour years, with net spending of about $160 million a year.1 £32.5 million for Robinho, £25 million for Emmanuel Adebayor, £25.5 million for Carlos Tevez — who did play for Manchester United — £27 million for Edin Dzeko, £38 million for Sergio Aguero. That’s the tip of the iceberg. Some of these players worked out and some didn’t; Robinho, who became the club’s first high-profile signing in 2008, spent most of his brief time as a Citizen sulking and giving press conferences about weather. But there was no doubt Mansour was trying to make good on his spokesminions’ early promise to use money (the bitcoin of its day) to transform soccer forever.

And the club improved fast, if not quite as fast as forecast, winning the FA Cup in 2011 and the league in 2012, City’s first real trophies since the 1970s. But something strange happened on the way to the podium: Under the Italian manager Roberto Mancini, City developed a reputation for being, gasp, kind of defensive. It wasn’t that Mancini’s sides didn’t score goals; they did, and sometimes as spectacularly as their wage bills would lead you to expect. The squad netted 73 league goals in 2009-10, 60 in 2010-11, 93 in the title season two years ago. They would also, not all that infrequently, do stuff like this:

Still, though. Mancini’s tactics were often criticized for being overly cautious — including by Diego Maradona, if that counts — and for lacking imagination. In a strange way, it didn’t help Mancini’s case that the club assembled a defense that was pitiless and awesome, with Kompany and Joleon Lescott and a whole bunch of dudes you wouldn’t want to go slaloming through with a ball. The back line fed the attack,2 of course, but you’d watch the whole squad function as a unit and think My, what impressive organization a lot more often than you’d think AND THEY SHALL OVERRUN THE LANDS, AND THE HILLS SHALL STREAM WITH BLOOD.

I’m not speaking as a scientist here, but there was always something weirdly stolid and begrudging about the way Mancini went about winning trophies. Given a massive stake and a run of incredible hands, he often looked like he found poker itself distasteful. So City won, and the fans were (mostly) pretty happy, and the owners couldn’t exactly complain. If they hadn’t been pragmatists, they’d still have been partying with the Donald Trump of Abu Dhabi. But it wasn’t quite what anyone had expected. It wasn’t what other clubs had feared. Style is, first and foremost, knowing your essential nature. City spent most of the last half-decade unsure whether they were a half-crazed science project or a dry tactical venture. It was as if Dr. Jekyll had changed halfway into Mr. Hyde and then started yelling at himself to change back.

And that’s why this season, and this upcoming match against Liverpool, is so compelling for City fans. Under the gaunt tutelage of Manuel Pellegrini, the team — while still pretty badass defensively — has finally gone Full Hyde. With the deathlessly brilliant Yaya Touré stampeding through midfields, Sergio Aguero abusing the concept of speed, and Edin Dzeko dzestroying dzenemy dzoalkeepers, they’re more fun to watch than at any time since the takeover, meaning any time since the ’70s, essentially. The clockwork is finally moving in a way that looks alive.

Manchester City aren’t the best team in the world,3 but if they win their remaining games they’ll take their second Premier League title in three years.4 They won the League Cup last month. They’re scary and getting scarier. Building an all-conquering international superteam of phenomenal flair and style turns out to be hard work, even for the princes of the earth. A win over Liverpool on Sunday puts them that much closer. It’s a goal.