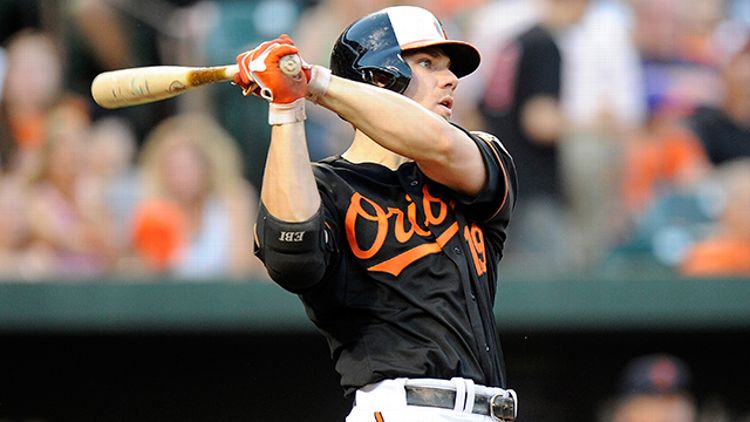 With the All-Star Game a few days away, it’s time to unveil our American League fantasy all-stars. More than a simple ranking of the top-producing players, we’re looking for players who have not only put up huge numbers but also generated huge profits, going from late-round/low-dollar picks on draft day to fantasy superstars. (We profiled our National League fantasy all-stars here.)

Who are these fantasy stars, and what should we expect from them in the second half? Let’s take a look.

C Jason Castro (Astros): An end-gamer even in the deepest leagues, Castro has been one of the few bright spots for an Astros organization that has most of its most intriguing players working their way through the farm system. Much of Castro’s skill set remains nearly unchanged from last year, including his strikeout and walk rates and batted-ball profile. Many of the results look similar, too, most notably his batting average and on-base percentage. But Castro has experienced a power spike, already doubling last year’s home run total in a nearly identical number of plate appearances. He serves as a solid reminder to target players in their mid-20s when picking through the $1 or final-round options in your draft, since previously dull players can and do experience breakouts around that age (Castro turned 26 last month). Assuming the power holds (and Minute Maid Park will help on that front), you’re likely looking at a pretty stable commodity: You could nitpick over Castro’s .319 batting average on balls in play given his limited speed, but as one of the top line drive generators in the game, Castro might actually have a little upside left when it comes to hitting for average.

1B Chris Davis (Orioles): Easy to say now, but maybe we all should have bid more aggressively. For all the “How the hell is doing this?” stories that have been written on Davis, we’re still talking about a player who hit .270 with 33 homers and 85 RBIs in just 139 games last year. Though his sky-high strikeout rates presented a batting average risk, the potential for a huge home run total was always there — especially when you factor in this being Davis’s age-27 season.

But yes, Davis is a good sell-high candidate. Though he’s continued to crank homers all year long, he’s also hit just .232 over his past 31 games, with 44 strikeouts against just nine walks (and 13 homers); now, as before, he still struggles to make contact. If someone in your league is still buying the over-.300 average to go with that massive power and is willing to offer a gigantic bundle of talent in return, you have to listen.

2B Jason Kipnis (Indians): He wouldn’t have come cheap even in shallow mixed leagues, not after a breakout season in which he swatted 14 homers and swiped 31 bases. But Kipnis has found another gear in this, his (wait for it) age-26 season. He’s been the 10th-most valuable position player in the majors according to ESPN’s Player Rater, with well-above-average numbers in every roto category, including a top-15 ranking on stolen bases. He’s young, healthy, and hitting third in a potent Indians lineup. Ride him.

3B Josh Donaldson (A’s): Donaldson’s path to fantasy stardom was a long one. Drafted by the Cubs as a catcher in 2007, he was dealt a year later as part of a six-player trade that sent Chad Gaudin and Rich Harden to Chicago. He made his major league debut in 2010, did little of note in 14 games, then didn’t make it back to the show until 2012. By then a third baseman, Donaldson claimed a share of that job in Oakland last year, and chipped in a few big hits as the A’s stormed to the AL West title. Still, his overall numbers were poor: .241/.289/.398, albeit with nine homers in 75 games. Everything clicked this year, with Donaldson cranking up his walk rate, slashing his strikeouts, lifting his batting average on balls in play almost 70 points and cranking up the power to rank fifth among third basemen. He is a regression risk, with a batting average that will probably dip below .300 by year’s end and some concern about whether the power surge will continue given his merely decent numbers in the past. But Donaldson isn’t likely to garner a ton of respect in trade talks anyway (and was one of the worst All-Star Game snubs, for that matter). So really, standing pat is a reasonable option.

P.S.: He’s 27 years old. Just sayin’, probably something to watch at the draft table next year.

SS Jhonny Peralta (Tigers): Amid one of the weakest groups of AL shortstops that we’ve seen in years, Peralta has been the most valuable roto commodity. He and Jed Lowrie (also considered for this spot) came into Wednesday’s games tied atop the AL shortstop leaderboard with a .303 batting average. That’s a big surprise for Peralta, a year after he hit .239/.305/.384. It’s also what makes him the biggest regression risk on this list: Peralta leads the majors in BABIP, sitting almost 70 points above his career mark. He’s already slumping badly over the past three and a half weeks, hitting just .225/.281/.326 (and that’s despite a .306 BABIP during that period). In shallow mixed leagues, you might consider trading Peralta for, say, a second-tier closer, then buying low on a different shortstop on the waiver wire; if no one has noticed what Yunel Escobar has done after a terrible start (.280/.333/.416, seven homers, 35 runs scored, 36 RBIs since April 21), he’d be a good pick.

OF Nate McLouth (Orioles): McLouth did an excellent job for the O’s down the stretch last year after being rescued from the scrap heap, hitting .268/.342/.435 in 55 games. Still, he’d been declining for four years following his lone All-Star appearance (and dubious Gold Glove win) in 2008, several attractive free-agent outfielders became available over the winter, and spending a few bucks for what seemed a sure upgrade would’ve barely registered in Peter Angelos’s nine-figures-a-year MASN windfall. Instead the Orioles seemed to settle for the cheap option, re-upping McLouth on a one-year, $2 million deal.

Turns out they might’ve known what they were doing after all. McLouth’s slash line is essentially identical to what he did last year in Baltimore. What’s changed is an outburst of base stealing, a move that has improved his real-life value while thrusting his fantasy value sky-high. In the AL, only Jacoby Ellsbury (also considered for a fantasy all-stars spot given he was coming off an injury-plagued season and has been a monster this year) has stolen more bases than McLouth. I’d still be a little skeptical, though. McLouth hasn’t stolen a base in 19 games and at age 31 shouldn’t strike you as a strong bet to ride fresh legs to another 20-plus steals the rest of the way. McLouth might not be marketable as a star commodity by himself. But if you were after starting pitching help and could offer McLouth and an above-average innings-eater for an ace? That could be something worth pursuing.

OF Daniel Nava (Red Sox): Any time a team signs a player for $1 — a player who was 4-foot-8 and weighed 70 pounds entering high school — the mere idea of him seeing a single at-bat in the big leagues seems impossible. Instead here’s the 30-year-old Nava delivering major fantasy (and real-life) value, hitting .296/.383/.446 with 10 homers, 51 RBIs, and 51 runs scored. If Castro has been good at roping line drives this year, Nava has been great, ranking seventh in the majors in line drive rate. A switch-hitter, Nava is nonetheless getting the platoon treatment, which makes sense given his .649 OPS vs. lefties this year. That platoon status means you can’t necessarily depend on big counting stats in the second half, even when playing for the highest-scoring team in baseball. But Nava’s patient approach will serve him well, and shielding him from lefties should offer some batting average insurance, and give him a better chance to produce when he does get in the lineup.

OF Raul Ibanez (Mariners): Here’s one of my all-time favorite stats — Ibanez has hit more home runs in his 40s than he did in his 20s. Despite cracking 19 big flies last year, Ibanez was ignored in most fantasy leagues, probably because he was entering his age-41 season (and didn’t have a clear path to an everyday job). He has come back this year with a more aggressive approach, walking less often, striking out more often than he ever has before, and cranking the ball when he does make contact, with an assist from Safeco Field’s moved-up fences. An Isolated Power number just under .300 is a mortal lock to regress by year’s end, but hell, no one’s going to offer you much for Ibanez even with all those home runs. Root for the Mariners to trade him to a high-offense contender who’ll continue to play him every day, then enjoy the rest of Ibanez’s Father Time–wedgieing season.

RP Koji Uehara (Red Sox): Just six saves so far, but those few saves combined with Uehara’s predictably excellent ratios have made him a strong asset out of the pen, especially since he probably went for a buck or two (or a very late pick) in your draft. We’re talking about a pitcher who’s struck out nearly eight batters over the course of his career for every one that he’s walked, so the skills are certainly real. The opportunity might be fleeting, though: Uehara’s already the fourth Red Sox pitcher to have been named as co-closer or better this year, and Boston will surely be shopping for relief help during the next few weeks, possibly acquiring a more established closer to knock Uehara back to high-leverage work in the seventh and eighth innings. Sell.

On Jozy Altidore's Move to Sunderland