On Jozy Altidore’s Move to Sunderland 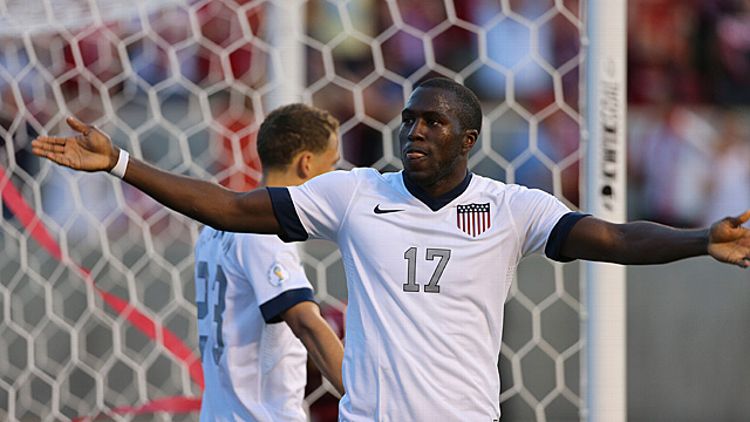 This weekend I had one of those brief feelings of mid-Atlantic rootlessness that I sometimes get when the footballing world of my first three decades and the soccer world of the past 10 years intersect from their usually parallel universes. This time it was caused by the transfer of Jozy Altidore to Sunderland, which was greeted with mildly underwhelmed bemusement on both sides of the Atlantic, though for different sets of reasons, expectations, and histories, and with the usual divisions caused by a common language.

As someone with some knowledge of both camps, and who speaks a rudimentary version of both dialects, let me attempt to mediate:

What some American fans fear: Jozy is selling himself short. He crushed it at Alkmaar, and he’s finally getting the goals he’s promised for the national team. He should be going to a big four team, or at least a club involved in a European competition next season. He’s not going to get the same sort of supply at Sunderland — they had one pass last year and that was because Adam Johnson fell over. They’ll go with one up front anyway and he’ll be second choice to Steven Fletcher. It’s a step backward/sideways/diagonally/over/anywhere but forward …

What some Sunderland fans fear: Wasn’t he that lad that was crap at Hull?

I suspect that U.S. soccer fans, the ones who source at least part of their diet offshore, may have the rather more informed opinion here, through a working knowledge of English soccer that compares favorably with many Sunderland fans’ knowledge of the U.S. game (Beckham), so let’s temporarily treat their fears as the more credible ones. Uninspiring as Sunderland have been of late though, they’re probably just about the right move for Altidore right now.

Yes, this move makes him the subject of two of the largest transfer fees ever for a U.S. player. With that perhaps comes the expectation that the reflected glory for U.S. soccer might be directly proportionate to the price tag. And even as a die-hard Sunderland fan, I’m not going to argue that signing for the present-day incarnation of the team carries the kind of top-tier cachet that other clubs offer.

But he’s now at a club where he’ll get playing time every week — unlike say, the more proven Clint Dempsey, who went from being the big man at Fulham to utility player at Spurs, now struggling for playing time against Lewis Holtby and, presumably soon, Paulinho. Funnily enough, Dempsey was linked with a Sunderland move before going to Spurs, sending shudders of aesthetic disgust through U.S. Twitter accounts. I wouldn’t bet against Deuce relishing the competition for places, and ultimately proving to have made the right move for himself. But, equally, considering the stage Altidore’s career is in, and the very particular, elliptical trajectory he has taken through various team benches before his Eredivisie success, I wouldn’t argue against Sunderland being the right place for him either. For now.

As for what he’ll face there … Well, stylistically Fletcher isn’t the same sort of foil Charlie Davis provided during Altidore’s most promising period, but the two have the potential to play well together if the supply line is right. Each has the capacity to lead the line alone when required, if given enough support play to make their hold-up play more than one long physical struggle. So the key will be the Sunderland midfield. And that’s less of a key than a big question mark, given Paulo di Canio’s ongoing summer project of turning Roker into Little Italy, overhauling his squad at an alarming rate. Altidore has been the most high-value purchase in a summer of change that has seen the club’s savior goalkeeper, Simon Mignolet, depart for Liverpool. The lineup for opening day is anybody’s guess right now.

Break it down a little further, though, and there are two moves that have not yet happened at the Stadium of Light that may determine just how Altidore starts and continues. Sunderland’s attacking midfielder Stefane Sessegnon is widely thought to be on his way out, taking with him some of the last vestiges of the old Sunderland’s creative flair (hardly an abundant quantity at the best of times). A lot will depend on his replacement, expected to be the Juventus midfielder Emanuele Giaccherini. Sessegnon is capable of magic, but sometimes incapable of seeing a teammate 10 feet away. Giaccherini may be more receptive to a system, willing to be the key to linking the team’s movement behind the Sunderland strikers. It’s that movement off a trusted link man as much as a fellow striker that seems to see Altidore thrive — witness his recent understanding with Dempsey at the international level, and his movement at Alkmaar.

That Sunderland fan fear I cited, while tongue in cheek and not representing the majority of a usually pretty knowledgeable fan base’s attitude, illustrates why the big four/big European team discussion is partly moot. For much as those of us who follow U.S. soccer want and expect Altidore to be a big deal, he’s not, yet, and certainly not in the would-be cosmopolitan (and at times terribly parochial) world of English football. Let’s not forget that, before AZ Alkmaar, his career was drifting alarmingly for such a young player. Any Premier League team looking at him couldn’t care less about what he might represent for the U.S. game, and could also see the goals he plundered in Holland as being ones scored by a flat track bully in a weaker league (I’m not saying that’s justified, but it’s not an atypical attitude).

What such a fan might also hopefully see, as Sunderland seem to have done, is a player who didn’t disappear after a rough year in the English top league and who has returned, apparently stronger and better as a player and a man, at both the domestic and international levels. They might hope that the future superstar’s humbling detours through Villareal, Bursaspor, and Hull have turned out to be the making of him, and think he’s shown the type of character and talent in overcoming that adversity that suggests he’s not just worth another look, but also actively building an attack around. That represents a faith that should appeal to most players in Altidore’s position.

U.S. fans might think Altidore’s already way beyond having to audition at “a club like Sunderland,” but as Landon Donovan can tell them, nobody’s beyond having to audition. And, with respect to everywhere else Altidore has been, he has never played in a region where football is quite so … er, everything as it is in the northeast of England. This will be a true test of the character we’re led to believe Altidore has now. He’s in the right place.

Your Annual Reminder: The Tour de France Is Awesome