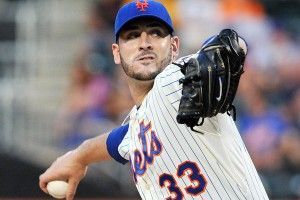 Mailbag time! If you’ve got a question for a future fantasy baseball post, e-mail grantlandfantasy@gmail.com, or do as these fine folks did by tweeting questions to me here: @jonahkeri.

What is the general potential of Matt Harvey? Could he be the future ace of the Mets? Is he worth staking as a keeper in a competitive NL-only league?
— Kevin McNeill

Pretty strong. Harvey came into this season as Baseball America’s 54th-ranked prospect. In 20 starts at Triple-A this season, Harvey fanned more than a batter an inning, hiking his minor league total to 268 strikeouts (and 95 walks) in 245 ⅔ innings. Called up to the majors a month ago, Harvey’s continued his bat-missing ways. On Wednesday against the Rockies, he struck out nine Rockies in six innings. That hiked his season total to 43 Ks (along with 15 walks and three homers allowed) in 36 innings. Harvey’s 43 punch-outs in his first six major league games actually broke the Mets franchise record … previously held by some guy named Nolan.

All things being equal, I always favor National League pitchers over their AL counterparts in mixed leagues, since they pitch in a lower run environment (either both leagues or neither league should use the DH at this point, given we’ll have interleague play every day of the season in 2013, but that’s another story). The Mets also play in one of the friendliest MLB parks for pitchers. A strikeout pitcher performing in those conditions has a chance to be an excellent keeper. The only reason he might not ascend to Mets ace status is because R.A. Dickey’s a Cy Young contender, and Zack Wheeler projects as a future star in his own right. This could be a loaded Mets pitching staff next year.

Can you talk about some players you think will bounce back from setbacks this year? I feel like players such as Eric Hosmer and Desmond Jennings were major disappointments considering their talent. Do you attribute these failings to not adjusting to major league pitching, and how confident are you that they can regain some of the luster that was lost from this year?

In the case of Hosmer I continued to keep him on my team due to his consistently low BABIP which I attributed to luck, hoping that would turn around. I understand the basics of BABIP but do you think in this case I was too quick to dismiss this stat as a fluke? Could there be underlying problems with someone’s game that would contribute to having a low BABIP?
— Nathan Raynard

Absolutely. We’ve come a long way since Voros McCracken first proposed the idea that pitchers have nearly zero control over balls hit in play. We now break out batted-ball types by line drives, ground balls, and fly balls, and understand that each of those outcomes produces wildly different results. We know that different ballparks will have different effects on batting average on balls in play. That on the flip side, hitters actually do exert a fair bit of control over their BABIP results, whether through hitting more line drives, banging out a bunch of infield hits thanks to exceptional speed, or, in the case of hitting savants like Tony Gwynn, being so good that they can simply hit ’em where they ain’t. But there’s so much we still don’t know. The hope is that new systems such as HITf/x will help us better understand a hitter’s quality of contact — the velocity with which he hits the ball, amount of backspin, etc. — and thus make it easier to predict whether or not that hitter’s balls in play will fall in for hits.

So what’s the deal with Eric Hosmer? After carrying a microscopic BABIP below .200 for a while, that figure’s regulated to a low but not extreme .261 (league average has hovered in the low-.290s in the past couple years). He’s hitting line drives at a similar rate as he did last season, but he’s also hitting ground balls at an absurdly high 55 percent clip. If Juan Pierre’s hitting that many grounders in his mid-20s, that’s a speedy slap hitter making the most of his skill set. If a would-be power hitter’s burning that many worms, that’s a bad sign. Is there something about Hosmer’s approach that’s making him hit more grounders, and generate less power? There are few stats in the public domain that can properly answer that question; we need in-depth scouting reports and advanced data sets to take a stab at it. Hosmer’s only 22 years old, with an excellent pedigree, coming off a strong rookie season. Those are good reasons to consider him a buy-low for next season. But we’d have a higher degree of confidence on that front if we knew more about Hosmer, and players in general. We can accept the fact that teams often know a lot more about players than we as laypeople can, without it coming off as an appeal to authority.

I constantly hear baseball and fantasy analysts talk about luck when it comes to baseball. They’ll often say Player A has been getting lucky for the past month and regression is right around the corner. I’m wondering if luck has a different meaning in baseball than it does in real life. Are most players destined to be “lucky” once or twice a year, and can luck be predicted AND if it’s predictable, is it even considered luck anymore?
— Jody Canaday

The “luck” label is an extension of the BABIP discussion: If we can’t easily explain or classify a certain level of performance, the easy way out is to call it luck. Whatever term you want to use, though, there are certainly outcomes which affect a player’s numbers and have little to do with them. For instance, if a starting pitcher leaves the game with a runner on first and two outs and the next guy in gives up three straight singles to score a run, that run is charged to the starter, not the reliever. Hardly fair. One of the biggest reasons statheads don’t put much stock in stats such as win-lose record and runs batted in is that those numbers rely heavily on the contributions of others, and thus aren’t great measures for evaluating performance.

Yes, it is the case that numbers often even out over the course of an entire season, that the slumps and streaks we might attribute to luck or random variance will balance out given a large enough sample of games. But not always. Cliff Lee hasn’t been quite as good this year as in years past. But we’re not nearly five months into the season and a pitcher with a 6-to-1 strikeout-to-walk rate and 154 ⅔ innings pitched is sitting on a 2-7 record. We’re nearly out of time for that record to correct itself before the end of this year … but I’d bet the farm on some positive regression in 2013.

I still have Brandon Beachy on my team due to a keepers rule. We can keep players for next year, and take them 3 rounds earlier than the original draft year. I drafted Beachy in the 8th round last year, so if I keep him, I get to take him in the 5th round in 2013. I wouldn’t hesitate if I knew he was going to start the season in the rotation, but that may not be true. What should I do?
— Drew Turner

Drop him. Beachy’s going to miss a good chunk of the 2013 season. And most fantasy leagues tend to see teams load up on hitting early in the draft, leaving gobs of pitching talent on the board even into the middle and late rounds. As a point of reference, I drafted Matt Cain — a pitcher with a much longer track record of success than Beachy and no injury concerns — with the second pick of the sixth round in my 13-team mixed league this season.

I am in a standard head-to-head, 12-team fantasy baseball league. I need to keep four of the players below, there are no limits on how long you can keep a guy, and there are no draft pick/auction values attached to them.

Thanks for the help!
— Justin

In order of preference:

Trout — 21 years old and already the most valuable fantasy commodity in baseball, by far.

Fielder — One of the most reliable fantasy commodities around. Yes, there are plenty of first basemen who put up numbers. But Fielder has the added advantage of being incredible durable, with zero DL stints since becoming a full-time player in 2006 and no fewer than 157 games played in any season coming into this year. Throw in the potent lineup around him, and a drastically reduced strikeout rate that bodes well for his present and future batting average, and he’s a true blue-chipper.

Harper — The youngest of the bunch and immensely talented. But he’s still got lots of work to do: Over his past 58 games, he’s hitting just .210/.280/.323. A league that lets you keep players forever makes Harper’s youth and potential extremely attractive. But players who can produce like stars right away as opposed to some undetermined point in the future also carry a lot more value. Trading Harper for, say, a star player in his late-20s could be the play here.

The Designated Player: An Introduction to Our New MLS Column