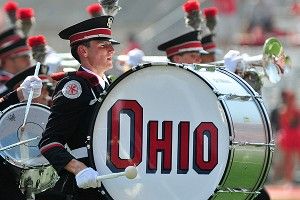 A couple of years back, I had a revelatory moment on a college-football message board. We must have gotten tired of posting police booking photos of Texas A&M players, because someone asked the board: Who here has been to the most University of Texas games?

The revelation happened when I got a little way down the thread. A few posters announced they’d been to every single Texas game, home and away, over a period of 30-plus years. Provo, Utah, 1988; Piscataway, New Jersey, 1999; Manhattan, Kansas, 2002 … Moreover, they had no intention of ending their streaks. Thirty years from now, we’d find them face-down at Eskimo Joe’s in Stillwater, with their iPhones logged onto the message board and unused tickets in their cold, dead hands.

My own road-trip inventory is comparatively light. I got to hear the Colorado fight song back in 1996, before the Buffaloes program got fully Neuheiseled. I squeezed in a fantastic, Saturday-to-Sunday road trip to Columbus, Ohio, in 2005, when Texas beat the Buckeyes. It was there, with my pal Daniel, that I began to think there was an art to attending a college-football game on the road.

An NFL road game, like most things NFL, is an inferior substitute. You buy a ticket, you talk trash, you leave. (After the Cowboys beat the Chiefs in Dallas in 1995, I remember angry Chiefs fans yelling, “See you at the Super Bowl!” We looked but couldn’t find them.) Going to a college roader requires the dexterity of Jason Bourne, some luck, and a good deal of self-preservation. Follow these tips and you’ll be fine.

Common rookie mistake: You road-trip to an away game in a car covered in your school’s stickers. Or maybe just with your out-of-state plates. You return to the car after the game and find your tires slashed, your paint keyed, etc. Don’t do this.

Sit with your own kind.

You make it to the stadium. It’s tempting to say, “Eh, I’ll grab tickets and sit anywhere.” This is due to the strange layout of a college stadium, which might have 100,000 seats but only a few thousand (the amount varies by conference) allotted for visiting fans. And those visitors’ seats are usually crummy, stuck in a corner or in the end zone. Still, that’s where you want to be. Daniel and I bought our tickets at the Texas alumni party and realized right away that we’d made the right move. When you’re at a road game, you want to be able to cheer loudly. You want to be able to throw yourself around bodily like you do at a home game. You can’t do this if you’re in the midst of 95,000 Buckeyes fans.

Another problem: If you try to scalp tickets while wearing your jersey, you’re likely to get the away-team reverse discount. Speaking of jerseys …

Downside: The non-orange button-down I wore in Columbus is a deep source of shame and will never hang in my sports clothing hall of fame.

Upside: I am currently alive.

Don’t speak outside the stadium.

I’ve broken this rule a few times. Most notably, at the 1998 Texas-Oklahoma postgame in Dallas, where I yelled at an older female Sooner fan in a “Stone Cold” Steve Austin voice (it was 1998, remember) for about 10 minutes. The Sooner woman finally had to be held back by her husband so she wouldn’t slap me. Retroactive thanks to my friends for pointing and laughing instead of hauling me out of there.

That was bush league. After Texas’s 45-35 upset win in 2008, I changed things up: I grabbed a turkey leg, sat on a bench, and consumed it Game of Thrones–style. I don’t remember saying a word, just glaring. This was a much better way to celebrate a win.

A corollary rule: “Classy” fan talk is even lamer than trash talk. I always hear home fans assuring visitors, “You guys are great fans.” Or: “Good luck with the rest of the season.” Like the postgame coaches’ handshake, this is utterly pointless. Silent loathing beats friendly insincerity.

Have a postgame escape route.

This is more of a pre-iPhone problem, but it’s worth mentioning if you’re texting and wearing out your phone during the game. You need to have an escape route. After Vince Young threw a late fourth-quarter TD to Limas Sweed in Columbus, Daniel and I raced out of Ohio Stadium triumphantly … and took about five wrong turns … and wound up on OSU’s fraternity row. Since we weren’t trying to be Larry Eustachy, this was stupid. I have a memory of guys standing on porches and glaring at us. That might be entirely invented, but that’s what it felt like.

Best option: Map out a route to an anonymous chain restaurant slightly off campus. At around 3 a.m., Daniel and I successfully reached a Waffle House.

I wouldn’t tell you not to go to the Michigan-Alabama game at Cowboys Stadium that’s one week from Saturday. But if your checking account is as light as mine was during undergrad, I’d advise you to skip it in favor of a true road game. (Exceptions made for Texas-Oklahoma, the World’s Largest Outdoor Cocktail Party, and other annual neutral-site games.)

Here’s the problem with the neutral-site games: They’re usually in NFL stadiums. (These days, they’re usually in Cowboys Stadium.) NFL stadiums are terrible places to watch college football. You can’t hear the bands; you’re not sitting on top of your fellow alums; you sacrifice the quirky road trip to Stillwater or Oxford for the kind of deadly, big-city weekender you read about in American Way magazine.

Moreover, you lose the “pilgrim in an unholy land” feeling you get from a true college road trip. It ought to be scary. That night in Columbus, the postgame got so out of control that Ohio State’s president had to write e-mail apologies to harassed Texas fans. One Buckeye named Alex Meske penned an essay-confession called “One Ohio State Fan’s Apology for His Conduct.” “I became exactly what I hate,” Meske wrote.

Actually, Buckeyes fans became exactly what I wanted. They were nutso, semi-belligerent, and protective of their turf. If you go on a football road trip and you don’t see a burning couch, you’ve gone to the wrong place.

What Will Eddie Jordan's Princeton Offense Look Like With the Lakers?