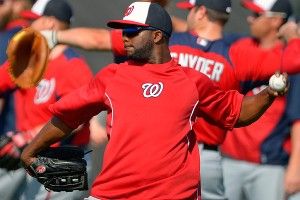 Welcome to a new season of fantasy baseball with the Roster Doctor. Last year, I introduced you to the I Don’t Give A Crap plan, which favors no strategy other than grabbing as many value picks as possible, regardless of position and without fear of waiting two hours in your auction before buying your first player.

For the record, in my three leagues last year, I finished first in an 18-team auction, tied for first in a 15-team LABR-Mixed experts league, and second in a 13-team mixed league (plus winning the league sidepot). IDGAC works better in auction format than straight draft, but the core principles hold for both. I’ll report back on this year’s draft results a little closer to Opening Day.

One of the main benefits of IDGAC is the ability to outbid everyone else late in the draft. If every other team blew their budgets on superstars early on, that should leave you with the few extra bucks necessary to acquire legitimate talent, while everyone else scrambles for $1 dregs. Last year, a cheap Mike Trout may have won you a league by himself. Ian Desmond, Kyle Seager, and Ben Revere were all significant contributors nabbed at the end of most drafts. Ditto for Wade Miley, Lance Lynn, and Tom Wilhelmsen. Many of these players might’ve only cost an extra buck or two to acquire above minimum bid levels; that extra buck or two led to a lot of Yoo-hoo showers six months later. With that in mind, let’s discuss some compelling endgame picks for 2013, the ones that can make or break your draft (and especially your auction).

Josh Rutledge (no. 248 on ESPN.com’s Fantasy Baseball Rankings, $1 projected bid in 12-team mixed league): In his first taste of the big leagues, Rutledge showed horrific plate discipline, striking out 54 times and walking just nine times in 291 plate appearances. To which you should say, big deal. Coors Field might not be quite the hitter’s paradise it was in the ’90s, when the Blake Street Bombers put up Miguel Cabrera–playing–Little League numbers. But it’s still easily the friendliest park for offensive stats. So now that Rutledge is set to open the season as the Rockies’ everyday second baseman, he may well strike out something like 125–150 times; those numbers would seriously threaten players’ batting average at any park other than Coors, which defrays much of that batting average risk by significantly boosting hitters’ batting average on balls in play. Besides, it’s not as if Rutledge has no verifiable skills other than playing half his games in Denver. Acknowledging that he played his 160 games last year largely in hitter’s parks, we’re still talking about a middle infielder who cracked 76 extra-base hits in 2012.

Rutledge will be eligible at shortstop in your draft and will gain second-base eligibility quickly given his new role. He’s also tentatively slated to bat second, sandwiched between the improved Dexter Fowler and sluggers Carlos Gonzalez and Troy Tulowitzki, which should offer plenty of opportunities for counting stats, especially runs scored. Throw in double-digit stolen-base potential (21 between Double-A and the majors last year) and Rutledge could be a steal if he goes anywhere near as late, or as cheaply, as ESPN’s rankings suggest.

Wil Myers (no. 269, $1): In a perfect world, the notion that Wil Myers could have more impact on a pennant race than any other prospect this year should square perfect with a Myers fantasy owner’s fortunes. But these are the Rays, the most judicious team in baseball when it comes to keeping prospects in the minors until they’re ready (or at least believed to be ready) and until they’re more cost-effective. The Rays could keep Myers at Triple-A until mid-to-late April, then call him up, thus making him a free agent after the 2019 season (instead of 2018 if he’s on the Opening Day roster). But they could also strand him in the minors for half the season, thus wiping out the possibility of Myers gaining arbitration eligibility early — and thus becoming pricier, quicker — as a Super 2 player. The ideal solution would be to lock him up with a long-term contract as soon as possible, the way the Rays did in signing Evan Longoria to a six-year contract with three club options just six days into his major league career. But a prospect as talented as Myers has to weigh long-term security against the possibility of leaving tens of millions of dollars on the table, the way a long-term contract might at this early stage of his career.

From a fantasy perspective, it’s all a big pain in the ass. Myers swatted 37 homers and won Baseball America’s Minor League Player of the Year award last year, and could be a productive, middle-of-the-lineup hitter for the star-lacking Rays from day one, or close to it. If he truly costs a buck or two, or a 22nd-round pick in a 12-team mixed league as these rankings suggest, you have to take the plunge, stash him on your bench, then hope for a relatively quick callup. Once Myers does make his debut, he’ll earn you a profit pretty damn quickly.

Jose Veras (no. 271, $1): It always cracks me up to see the disdain fellow owners have for lightly regarded closers. Sure, the Astros might lose 100 games this season. But even closers on terrible teams get plenty of save chances. And while Veras walks more batters than most stoppers, he also routinely strikes out 10-plus batters per nine innings. That ability to make batters swing and miss helps establish his bona fides as a pitcher who can accomplish the usually relatively easy task of protecting a one-, two-, or three-run lead by recording three measly outs; it also gives him a touch of added value as a closer who might produce 15 or 20 more strikeouts for 5×5 owners over the course of a season than a run-of-the-mill ninth-inning guy. Yes, the Astros are far more likely to trade any veteran with a pulse than other teams would be, given they’re in full rebuilding mode. And sure, Veras is clearly a stopgap solution, given he’s 32 years old, getting a shot at closing for the first time, and likely to be supplanted by someone younger and shinier before too long.

But perception can change in a hurry. If Veras goes into the season as Houston’s closer and gets through the first couple weeks of the season cleanly, while racking up a few saves, he’ll go from question mark to one of just 30 (or fewer) reliable sources of saves. Even with 5×5 fantasy rules reducing the value of closers, save scarcity will make owners do funny things once the season has started, even if they purposely steer clear of chasing saves during the draft. So if you’re concerned about the Astros trading or demoting Veras at some point, the move could be to draft him, collect 5 or 10 saves, then flip him for something else you need before the reckoning comes. However you play it, he’s easily worth taking at no. 271, or even a fair bit higher.

Denard Span (no. 300, $0): Span appears fully recovered from the concussion that cost him 70 games in 2011 and the shoulder injury that knocked him out for a month last year. Assuming he’s at full strength, fantasy owners will get a player who doesn’t do any one thing spectacularly but does enough to be a big bargain if he’s still on the board at no. 300 (the reserve rounds, if you’re in a 12-team mixed league). He’s a lifetime .284 hitter, so he’ll likely help your team batting average at least a bit; he stole 49 bases combined in 2009 and 2010 and 17 more in just 128 games last year; and if he stays all year long, Span’s on-base skills (career .357 OBP), combined with batting leadoff in front of Bryce Harper, Ryan Zimmerman, Adam LaRoche, and Jayson Werth, would make him a strong bet to approach 100 runs scored. Even the little things should work in Span’s favor: He turns 29 tomorrow, runs well, and is an excellent gloveman, meaning the Nats won’t be tempted to bench him or yank him early from games all that often. Invest.

Billy Hamilton (unranked, $0): The Wil Myers situation, just a bit more extreme. Hamilton has played just 50 games above Class A. The Reds just made a sizable trade to land Shin-Soo Choo, figuring he’d be a significant upgrade over the departed Drew Stubbs in center field. And Hamilton is still in the early stages of his shortstop-to-center transition, meaning he’ll need his speed to make up for a lack of reps and instincts in the outfield. So instead of a ready-to-contribute player with some weaker bats in front of him being held back for financial reasons, you’ve got a player who isn’t ready for everyday duty in the majors, blocked by a capable veteran. With seven home runs in more than 1,700 minor league plate appearances, there are questions about how well Hamilton’s skill set will play in the big leagues even after he gains more seasoning.

But the upside here is gigantic, way too big to ignore Hamilton completely, even if it means a final-round or reserve-round pick. We’re talking about a player who set the all-time professional record with 155 stolen bases last season. Even accounting for minor league competition, and the possibility that his on-base percentage plummets from last year’s .410 once he starts facing big league pitching, Hamilton is so fast that you have to take a shot with him. Give him 50 games, we could see 25 stolen bases. Give him half a season or a bit more, and 40 or 50 becomes a real possibility; that kind of total can win the category. If someone at the table wants to overreact to Hamilton’s potential and throw out a 12th-round pick or a double-digit bid, set him free. If the price gets much cheaper, go for it.