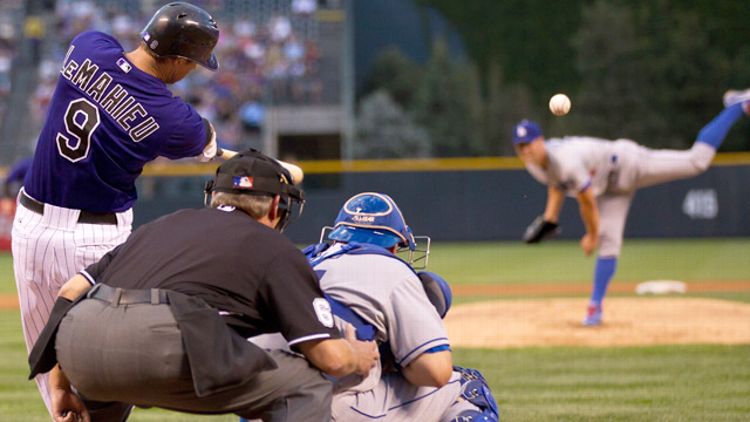 You learn a lot of weird and wonderful things when you move to Colorado. This is a craft beer paradise, but also somehow the fittest state in the nation. It’s a place where a light weekend activity involves bagging another 14er. And it’s a place where you can head to 20th and Blake with buddies, throw down a couple cold ones, converse about your latest 14er, look up … and see a 16-7 score in the fifth inning.

Coors Field is back, and it’s angry, my friends. The Colorado Rockies’ home park is boosting offense at a higher rate than it has in more than a decade. Theories abound as to why one of baseball’s most offense-friendly parks has ramped hitting back up to the Blake Street Bombers days. Some contend the Rockies have stopped using humidors to store baseballs and thus dampen offensive levels … but the evidence suggests otherwise. It might be Denver’s weather this summer, with temperatures uncharacteristically hitting and sticking in triple digits far more than they have in the past, thus creating a hot and dry launching pad for hitters. Or maybe it’s just our old friend random chance.

It’s certainly possible that that last scenario’s in play, and that hitting could start to cool off at Coors going forward. But the safe money’s on the stadium being a great way to pump up your fantasy team’s offense. More important for the purpose of today’s Doctor’s visit, it’s a great way to hurt your pitching ratios. For those of you entering playoff time in weekly leagues or in tight races for league titles that include close margins in ERA and WHIP, just a couple of disastrous Coors starts down the stretch could be enough to wreck your season.

Intuitively, you know this. You tell yourself you’ll be careful not to start your pitchers in Colorado. But then your resolve starts to weaken. “Well, I need strikeouts and wins, it’s a two-start week with one of them at Coors; maybe it won’t be so bad.” Or, “Sure, Coors can be terrible for pitchers, by my guy’s too good for that to affect him.”

Stop. Stop rationalizing, or being lazy about who you start. If you want to see the damage that can be done by ignoring matchups when setting your weekly lineups, consider these ugly examples.

Next on Fiers’s schedule was a two-start week, one against the non-threatening Phillies, the others at Coors. With the kind of stats Fiers had put up to that point and a relatively easy start against Philly on the agenda, trying to sneak a Colorado start through seemed a reasonable strategy. Except it wasn’t. The Rockies mashed Fiers for eight runs and nine hits, knocking him out after just two innings (Fiers didn’t pitch particularly well against the Phillies either, taking a second straight loss after yielding four runs in five innings).

Chris Capuano: Another roaring start to the season, another hideous collapse. Capuano went 7-1 with a 2.14 ERA and an opponents’ batting average of .190 in his first 10 trips to the mound this year. His next start at Coors? 5⅓ innings, seven runs, 11 baserunners. As a Capuano owner in two of my three leagues, I learned my lesson and benched him this week with more Coors ahead, despite a two-start slate and a need for strikeouts. If you guessed six runs, 10 hits, and another loss for Tuesday’s start, you win.

Clayton Kershaw: Matthew Berry has done an excellent job in explaining the Wandy Line. The idea goes like this: Certain pitchers you start no matter what. Everyone else, base their starts (or benchings) on matchups. This is an excellent way to run your fantasy team, especially in shallow leagues or standard 12-team mixed leagues. But even Kershaw, who might be the most qualified candidate for NL Cy Young right now, isn’t immune to the Coors Effect. Pitching on May 6, Kershaw did get through 7⅓ innings, with a solid 6-to-1 strikeout-to-walk rate. But he also got tagged for five runs, including three homers, en route to a no-decision in an 8-5 Dodgers loss.

Coors is the most obvious example. But more broadly, the message for the final month of the season should be clear: stream, stream, stream. Seek out pitchers headed to pitcher-friendly parks or those about to face weak-hitting opponents. Steer clear of matchups that involve slugging teams like the Yankees or nightmarish parks for pitchers like Coors or Arlington. Scan the waiver wire for pitchers who get more frequent turns in friendly climes, such as the Mariners’ Hisashi Iwakuma (4-1, 1.99 ERA, 46 strikeouts in 49⅔ innings over his past eight starts) and Casey Kelly (six shutout innings in his major league debut Monday, at Petco Park, of course).

If you need a guide to upcoming matchups, both for lineup purposes and to plan next week’s pickups, check out Rotowire’s Projected Starters calendar, which includes the team and pitcher your guy will be facing, the park he’ll be pitching in, and the batting average, strikeout rate, and home-run rate of that team. You can adjust the parameters to project the next seven, 14, or 21 days, so you can grab the pitcher who’s, say, ticketed for San Diego and Houston two weeks from now.

And unless you’ve got Pedro Martinez circa 2000, think long and hard before starting anyone in the land of 14ers.