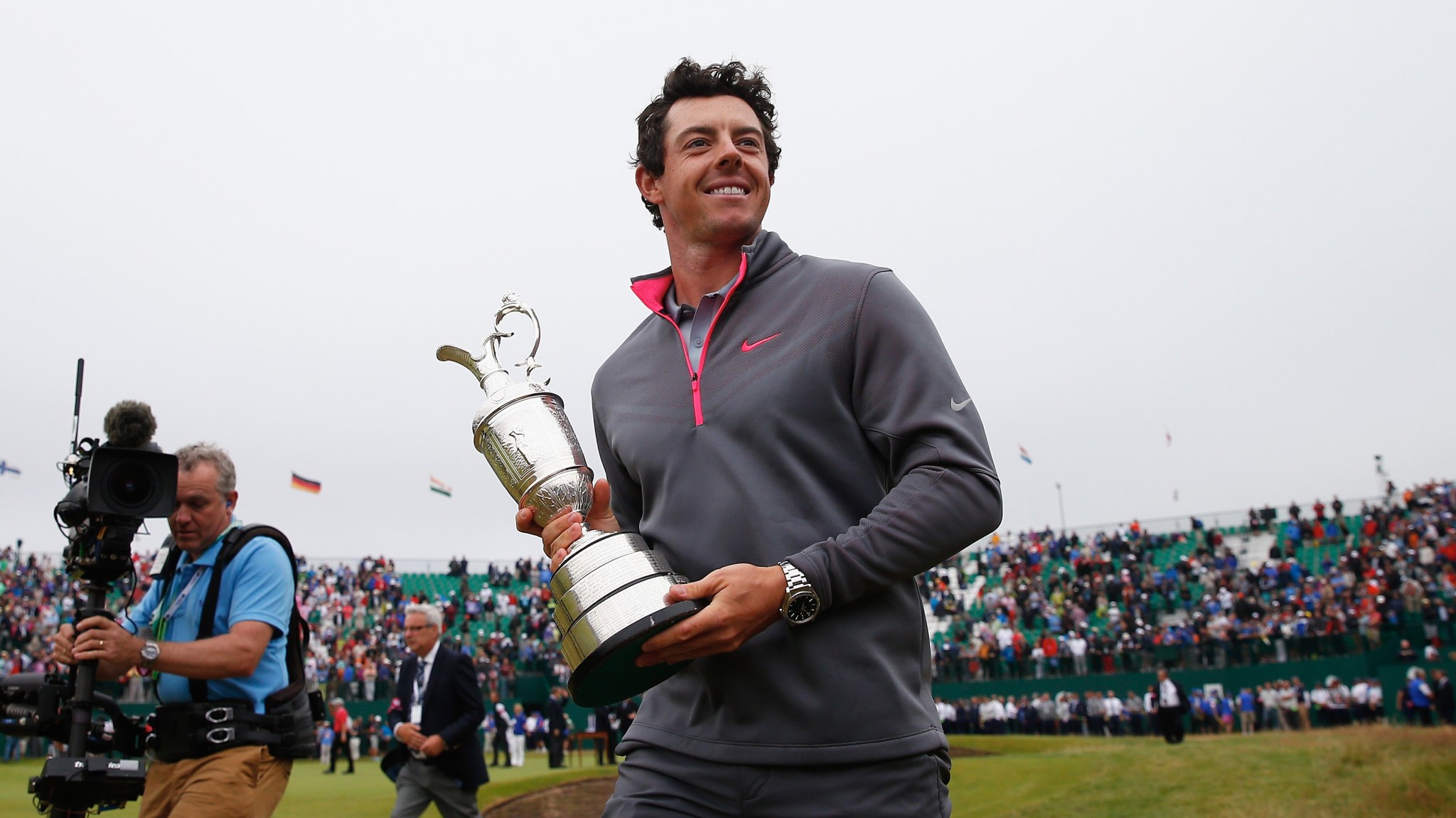 There’s never really been a period of time when it has been boring to be Rory McIlroy, but it’s a fair guess that 2014 is already a strong contender for Most Interesting Year of His Life. Entering the season, the two-time major champion and heir apparent to Tiger Woods no longer looked like the wunderkind of popular imagination. He won the Australian Open for his only title of 2013, after winning five (including the PGA Championship) the year before, and his critics harped on a sponsorship change from Titleist to Nike in November 2012 that had seemingly screwed up a very good thing. The low point, he’d later admit, came at the 2013 British Open in Muirfield, when Nick Faldo publicly lectured him about focusing on golf. McIlroy, looking irritated and a bit sullen, fired back in defense. Three days later, he finished up an ugly 79-75, failing to make the cut in a British Open for the first time in his professional career.

By March, though, it was clear his game was on the rise. McIlroy took a lead into the final round of the Honda Classic, and though he faltered with a Sunday 74 to lose to Russell Henley, his 63-66 opening showed the golf world that, at least sporadically, his proverbial A-game was once again accessible.

Top 10s at the Houston Open and the Masters followed, but the true turning point in his season came in the final round at Augusta. He noticed he’d consistently been missing his putts to the left — he ultimately missed 15 putts inside eight feet that week — so as an experiment, he drew a line around his ball and used it to aim two balls to the left of the hole. But when he stood over the ball and prepared to putt, it looked to him like he was aiming at the right edge. The difference wasn’t huge — three inches or so — but it was plenty big enough to result in a slew of bad misses on the short putts (the long ones, of course, were hopeless). He adjusted his stance and worked with a putting mirror to fix his alignment, and his game became increasingly lethal.

Off the course, the problems were just beginning. On May 21, in what quickly became the most infamous moment of his off-the-course career, he ended his engagement to tennis star Caroline Wozniacki over the phone three days after their wedding invitations went out. Maybe the fallout from the breakup, and whatever preceded it, goes some way to explaining the emergence of an odd pattern in his season, where brilliant rounds were quickly followed by near-meltdowns. At the Players, he finished sixth, but could have competed with Martin Kaymer for the title if not for a second-round 74. It had been worse in the second round of the Wells Fargo, when he shot 76, and got worse yet when he followed a season-best 63 at the Memorial with a season-worst 78. Last week, at the Scottish Open, he set a course record with a 64 on Thursday, but the Friday blues struck again to the tune of another 78.

In the midst of all this were some incredible rounds that demonstrated the erstwhile no. 1 golfer in the world in full command of his magic. He even shot a final-round 66 to come back from seven strokes down to win the BMW PGA Championship (the European Tour’s equivalent of the Players Championship), returning to the winner’s circle for the first time since December 2013. Coming into Hoylake, it was evident his talent had caught up with him. The plague was something mental, and it perpetually threatened to kill his consistency.

The Royal Liverpool Golf Club, a links course on England’s west coast, is an absolute bear when the wind and rain whip in from the Irish Sea. Then again, every links course in the British Isles is an absolute bear under wet, windy conditions. The weather is particularly relevant to the RLGC though, because in its absence, the course is nearly — and I say “nearly” to be polite — a pushover. Tiger won here in 2006 with a gaudy score of 18-under when the elements decided to take the week off, and while most golfers (with notable exceptions like Jordan Spieth, Kaymer, and Justin Rose) prefer easy courses, the average golf fan tends to root for the drama and difficulty that comes with “British Open weather.” Unfortunately, the driving winds and rain were largely absent again this year, and the players lucky enough to go off in the morning on Thursday and the afternoon on Friday had particularly serene conditions.

McIlroy was one of the lucky ones, and though many expected his Friday blues to strike again after an opening 66, he instead consolidated his success with the same exact score in the second round to take a four-shot lead into the weekend. Rickie Fowler caught him briefly on Saturday at 12-under, but two eagles on the final three holes propelled McIlroy to a six-shot lead after three rounds. It wasn’t insurmountable — Adam Scott held the same 54-hole margin when he lost to Ernie Els in 2012 — but was big enough that only a historic charge or a total collapse could hand the Claret Jug to anyone else.

And the golf, I have to say, was beautiful. It was even more beautiful for its imperfection, because there were times when McIlroy’s tee shots went into the tall grass, disappearing into the fescue, the cock’s-foot, the Yorkshire fog, only to come out again with a brilliant scramble and a long par-saving putt. As his score fell, and fell, there was that old feeling in the air, an electric something that cast him in a brighter light while the others toiled along with both feet plodding heavily uphill. It was the feeling from his first heyday — from Congressional, Kiawah Island — the one that can’t be counterfeited, which lets you know beyond a doubt that you’ve only seen this kind of excellence once before, once in your lifetime, once in modern golf, and everyone knows the name you say next.

At the start of McIlroy’s round Sunday, the sky was a dense English gray. It was the kind of sky responsible for stereotypes, and it prompted an odd stat from Alistair Beggs, the captain of Royal Liverpool Golf Club: Liverpool actually gets less rain than almost everywhere on the east coast of the U.S. — New York, Atlanta, etc. What it has less of is sunshine. Afternoons like Sunday tell the story: gray and cold for hours, but with very little precipitation falling from the threatening clouds.

Against this backdrop, the final round — mercifully — became exciting. McIlroy made a generous early bogey, and Sergio Garcia, an interesting, sincere person with a bad habit of putting his foot in his mouth, charged up the leaderboard, a fist pump and a “Vamos!” accompanying every made putt. When Garcia eagled the 10th and began the home stretch, with the Irish Sea and the Welsh hills visible behind him as he marched up the fairway, it almost seemed like he would exorcise a career’s worth of major ghosts in one spectacular round. McIlroy even showed signs of faltering on the front nine, but back-to-back birdies on the ninth and 10th holes restored his self-confidence, and when Garcia hit the wall of a pot bunker on 15 and Fowler’s charge came too late, McIlroy cruised to an easy finish, becoming the third player after Jack Nicklaus and Tiger Woods to win three majors before age 26 and, amazingly, the first European golfer to ever win three different majors.

When it was over, he held the Claret Jug and beamed, legs swaying over the edge of a pot bunker off the 18th green, looking briefly like the young soul he had left behind in the scorched earth of a year before. When the illusion cleared, you could see the truth: This is Rory McIlroy grown up, imperfect and spectacular, dangerous as hell.

About Last Weekend: The Unwritten Rules

An Update on What All 32 Starting Quarterbacks Are Doing (SPOILER: Nick Foles Is Kickboxing)