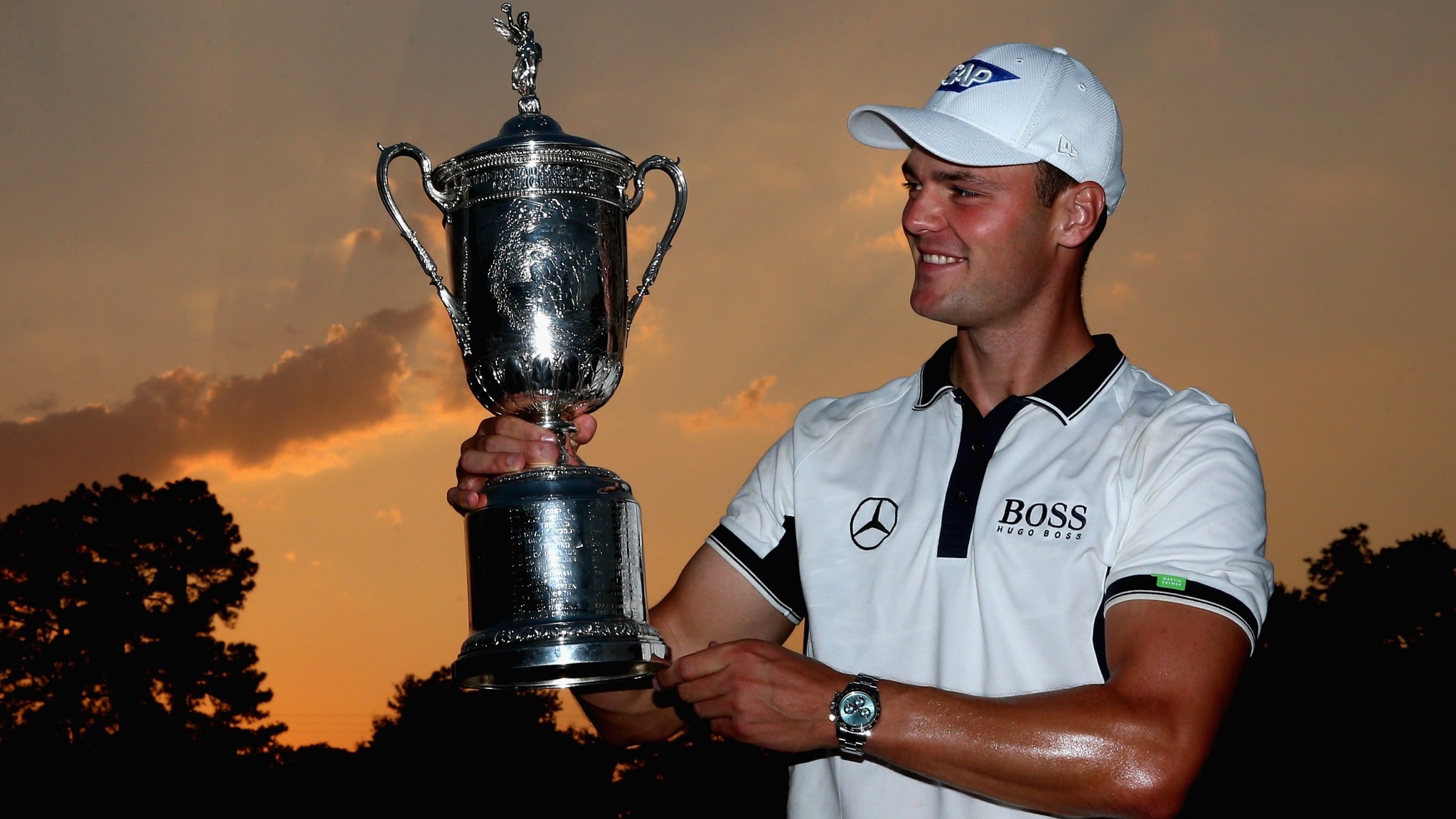 On Wednesday, Martin Kaymer told reporters that 8-over sounded like a great score for the U.S. Open, and that he’d take it if possible. There was a touch of hyperbole there, but only a touch, because Pinehurst no. 2 had been dried out and baked and hardened until even the fairways had gone from green to yellow to beige, and when you took into account the USGA’s propensity for diabolical hole locations, it figured to be another U.S. Open at which birdies were scarce and the winner finished over par.

Then, in a move so rare that it felt like instant history, the USGA took pity on the golfers. Rainstorms swirled in and around the North Carolina sandhills Wednesday night, but all the saving, softening precipitation missed the golf course, and suddenly Pinehurst no. 2 was — even by U.S. Open standards — too hard. The greens were watered at night, and then again in the morning, and when the players hit the course, they were stunned at the difference. There were birdies to be had, and they could actually attack the flag on the approach without the dread certainty that the ball would roll off the hard greens.

Thursday night, the promised rain finally came, and conditions on Friday were largely the same: softer than normal, scoreable, and falling short of the vicious demon course of popular imagination.

No player in eight previous U.S. Open rounds at Pinehurst no. 2 — the tournament was held here in 1999 and 2005 — had ever shot 65. On Thursday and Friday, Kaymer did it twice, vaulting to the top of the leaderboard at 10-under, his 130 total the best 36-hole score in U.S. Open history. With Brendon Todd in second place at 4-under, Kaymer also equaled the 36-hole lead of Tiger Woods at Pebble Beach in 2000 and Rory McIlroy at Congressional in 2011, two of the most dominant major performances in golf history.

Pinehurst no. 2 finally showed its teeth Saturday, and it was just what Kaymer wanted. The players below him didn’t want to admit it, but a chasm had formed between Kaymer and the field. As a collective, none of them would ever reach 4-under again, and Kaymer wouldn’t do worse than 7-under. Only Ricky Fowler and Erik Compton (who once called his mother as his second heart replacement was failing, sure he wasn’t going to make the hospital and wanting to say good-bye) managed to go under par in the third round. Fowler’s effort earned him a place in Sunday’s final pairing with Kaymer, where, five shots off the lead, he shot a 72 and finished in a tie for second place, eight shots off the German’s championship pace. He shot 1-over the weekend, and it was more than enough.

After his final round, Henrik Stenson summed up the Open, and Kaymer’s performance, succinctly: “He kind of killed the event in the first two days.”

Unfortunately for viewers at home, Kaymer’s dominance created a vacuum on the leaderboard; even NBC, airing its last U.S. Open, had trouble manufacturing tension on the weekend. Strange things happen in golf, but Kaymer’s bearing gave him an air of invincibility. After putting a ball off the green Saturday and taking a bogey, he simply laughed with his caddie. At press conferences, he spoke of his excitement at learning how he would react to pressure moments the following day. With a calm, thoughtful delivery off the course and relaxed body language on it, the German seemed collapse-proof. Through the heat and the clouds of dust and pollen, he sauntered down the fairways, immune to the conditions and the pressure that struck down his opponents one by one.

Kaymer’s story is a well-told one in the golf world; after reaching no. 1 in the world in 2011, following a series of victories that included the 2010 PGA Championship, he decided that his game wasn’t perfect. Among other things, he was unable to hit a right-to-left draw, and it was frustrating to him that he couldn’t hit every shot he wanted in every situation. He retooled his swing, and the struggles began. The slump (he hates that word, but when you look at the results, it’s apt) lasted almost two years, and though he had a heroic moment at the Ryder Cup when his putt on the 18th hole clinched the trophy for the Europeans, 2012 and 2013 mainly brought mediocre results. Before the Masters this year, he stopped working on the technical side of things, more or less satisfied with the advances in his game. Setting his perfectionism aside, he won the Players Championship a month ago, and after this weekend, he can put aside the “one-hit wonder” criticism forever.

Who is Kaymer, though, aside from the resurgent winner with a square jaw and the kind of superhero posture that looks upright and relaxed at the same time? Here is a person stripped entirely of the defense mechanisms, clichés, and bullshit that serve as armor for most professional golfers in their public interactions. There’s a philosophical side to Kaymer, but his brilliance is that he’s made it serve his game.

“I like to be in control of things,” he admitted after Saturday’s round. “It’s the way I think a lot of Germans are. But at the end of the day, you have to feel on the golf course. You have to create that feel and trust your skill and all the work. And today when I was standing on 18, that’s a tough tee shot. There’s pretty much no fairway. It’s very difficult to see any fairway from the back tee. So you stand there, and for me it was such an enjoyable shot, because I knew exactly where I wanted to aim and I thought, What a great position this is now. You are 7-under par at the U.S. Open, playing your third round … and it’s about that feel, that touch, that you play with your heart, that you can’t control too many things. That’s what I was trying to do the last three years. Now I just play.”

He’s thoughtful, and his game is bolstered, not hampered, by his intellect. It feeds his aggression on the course, dilutes his fear, and turns pressure and vulnerability into opportunity. His victory may have been boring, but his style compels.

A quick parting thought about the restoration of Pinehurst no. 2. In the words of David Owen, who wrote about the subject in The New Yorker in 2009, “the major design elements of a modern golf course are the synthetic analogues of various existing features of those early Scottish playing fields” where golf is believed to have been invented around 1400. Fairways are where the sheep and cattle grazed on the linksland between the beaches and the mainland soil. Bunkers are where the livestock huddled together to take shelter from the wind, wearing away the grass and topsoil and exposing the sandy bottom. Greens and tees are where rabbits, with jawbones that allowed them to chew lower than their larger brethren, created closely grazed flat areas. Golf came from the land; the land was not altered to accommodate golf.

Pinehurst sits in the Sandhills of North Carolina, just outside the Cape Fear river basin, and the topography, as you might guess, is dry and sandy. The restoration undertaken by Ben Crenshaw and Bill Coore for the 2014 U.S. Open is part of a larger movement away from the bright, artificial courses that have become the norm in America. (As you might imagine, restorations like these also save enormous amounts of water.) From its earliest days, golf courses reflected the local topography, and if there’s a “spirit of the game,” it stems from the unique characteristics of each course. Why shouldn’t a course in the Sandhills be dry and sandy? Why shouldn’t waste areas with wire grass replace thick rough? Why shouldn’t the fairways fade from green to yellow in extreme heat? Why aren’t these hills, and these sepia tones, beautiful?

The restoration, to me, was an incredible success that managed to be progressive while recalling the roots of the sport, and no amount of idiotic tweets by people who own generic golf courses in the dregs of Florida can diminish the feat.

San Antonio’s Revenge: Scenes From a Championship Run for the Ages