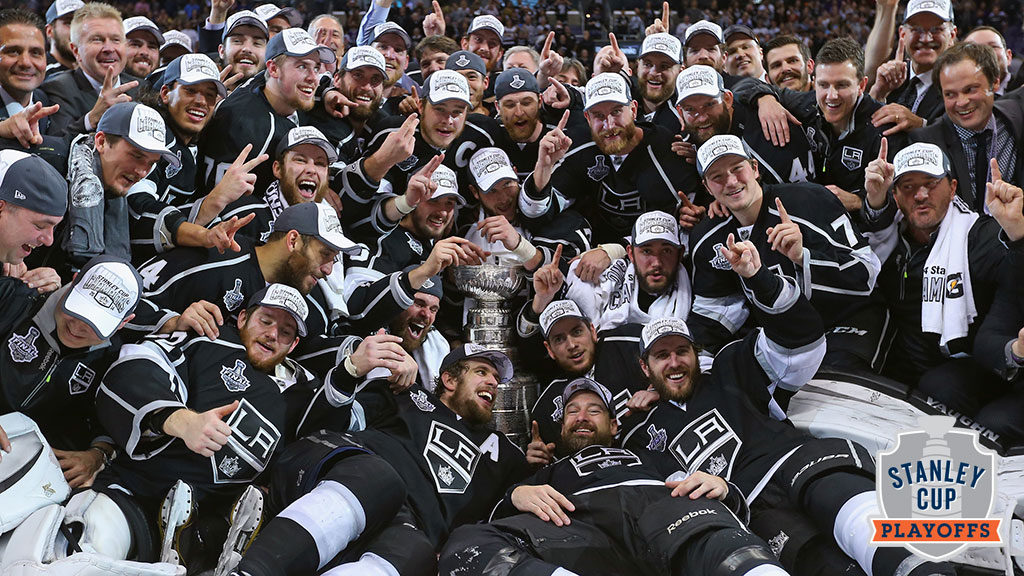 The Kings will parade the Stanley Cup through Los Angeles today, after earning the title by beating the Rangers on Friday night. You’ve seen the highlight by now — defenseman Alec Martinez jumping into the rush, then burying a rebound to end the game and make the Kings the first team in 34 years to win the Cup in overtime on their home ice. The goal ended the series in five remarkably close games, marking the third time in the final that the Kings beat New York in sudden death.

The win didn’t come as much of a surprise; just two years removed from a championship in 2012, the Kings weren’t exactly a long-shot pick heading into this year’s postseason, and by the time they reached the final they’d established themselves as the favorite.

But while the end result was predictable, the path the Kings followed to get there was not. In fact, the team spent much of the season defying conventional wisdom about how championship teams are supposed to be built. And in doing so, the Los Angeles Kings became the not-supposed-to Stanley Cup champs.

You’re not supposed to come back from down 3-0 in a series. Let’s start there, because it’s where the Kings themselves started, almost eight weeks ago. They opened the playoffs against the San Jose Sharks, a regular-season powerhouse who’d finished 11 points ahead of them in the standings. The Sharks won the first two games in San Jose, pummeling the Kings by scores of 6-3 and 7-2, and then took Game 3 in Los Angeles on a Patrick Marleau overtime winner that should have ended the Kings’ run before it ever really began.

Here’s one of those dirty little secrets of playoff hockey: When a series gets to 3-0, we all close the book. It’s over. We can’t say that out loud, because hey, anything can happen, right? Well, no, it’s can’t, we think to ourselves, and history has shown that we’re almost always right. When the horn sounds on Game 3 and it’s the same team celebrating for the third time in a row, we lift up the losing team by the scruff of its neck and gently place it into a pile labeled “Done.”

But the Kings crawled out of the pile and kept on, staving off elimination with a Game 4 win. There was talk last week of players later telling people that they left the ice after that game already knowing they had the series won, and Drew Doughty came right out said that they could see the panic in the Sharks players’ eyes. There’s probably more than a little bit of revisionist history going on here, but you know what they say about the winners and the history books.

You’re not supposed to lose three straight in the playoffs and survive, and the Kings somehow did it twice — against the Sharks, and then again in the middle of their second-round series against Anaheim before coming back to win Games 6 and 7 to knock off the Ducks, the West’s top seed. You’re not supposed to blow a 3-1 series lead either, and the Kings nearly did that against the mighty Blackhawks, before rallying for a Game 7 overtime win in a Western Conference final that will go down as one of the most entertaining playoff series in history.

You’re not supposed to win three straight seven-game series to get to the final, because no team ever had. You’re not supposed to have your loss column hit double digits on your road to the Cup, and no team had ever done that either. In 2012, when they won their first Cup, the Kings looked unbeatable, winning the first three games of every series and losing just four games during the entire postseason. This time, they looked vulnerable the whole way through, facing a record seven elimination games. Each time, they found a way.

You’re not supposed to make the Conn Smythe voting this hard. When you win a Stanley Cup, it’s usually because one player went superhuman and dragged you there. Maybe two players, if you’re really lucky or good or both.

But the Kings made this year’s vote all but impossible. Do you give it to Drew Doughty, for dominating at both ends while eating minutes against the opposition’s best? To Marian Gaborik, who scored more playoff goals than any player in five years? To Anze Kopitar, who led the playoff scoring race while going head-to-head with the West’s best centers? To Justin Williams, Mr. Game 7, who turned out to be pretty clutch in those other six games too? To Jeff Carter, who looked downright terrifying every time he touched the puck in the final? Williams ended up winning, but the angst among Conn Smythe voters in the press box was palpable.

You’re not supposed to add key pieces to your championship roster at the trade deadline. Come on, Dean Lombardi, you know the drill. We’ve heard it from GMs around the league for years. The trade deadline is hard. The prices are too high. It’s better to wait for the draft, or free agency, or training camp, or some other time when things aren’t so crazy. Besides, only one team can win the Cup every year, right?

Lombardi’s Kings have been that team twice now, and both times it was largely due to deals made near the deadline. In 2012 he plucked Carter out of Columbus in a blockbuster trade that cost him well-regarded young defenseman Jack Johnson and a first-round pick. This year, he went back to the Blue Jackets and got Gaborik for Matt Frattin and what ended up as a pair of second-rounders. Without those moves, the Kings’ franchise Cup drought would be at 47 years today. Best of luck to any GM who tries to sell his fan base on a stand-pat strategy next season.

For that matter, you’re not supposed to trade away your draft picks, because good teams build through the draft and the only way to do that is with picks in the top half of the first round. The Kings have traded their first-round pick in two of the last three years, and haven’t had a pick in the top 10 since 2009. That’s supposed to drain your depth, but they keep finding gems that everyone else has passed over, like Tanner Pearson with the last pick in the first round two years ago, or second-rounders like Kyle Clifford and Tyler Toffoli. Finding solid NHL contributors with those picks let them build a deep team that didn’t have to rely exclusively on their stars.

You’re not supposed to win the Cup when you were just the ninth-best team in the regular-season standings, and you’re certainly not supposed to do it by beating the 11th-best team. If only there had been some way to have seen this coming …

You’re not supposed to win the Cup without having the best goalie, and even though this is a post about the Kings and Jonathan Quick was fantastic against the Rangers when needed, we’re going to talk about Henrik Lundqvist for a minute here. He was magnificent throughout New York’s playoff run, and especially spectacular when the team faced elimination, which they did often. In Game 4 he became the first goalie in final history to make 40 saves in a regulation win with his team facing elimination.

He made 48 more on Friday, but it wasn’t enough. When Martinez finally beat him for the winner late in the second overtime, Lundqvist seemed heartbroken. He stayed facedown on the ice while the celebration raged around him before finally getting to his knees, and when his teammates came over to console him, he waved them away. He was surrounded by 19,000 people, completely alone.

You’re not supposed to win it all without a superstar captain. Look down the list of the guys who’ve been handed the Cup in recent years: Lidstrom, Crosby, Toews, Chara, Niedermayer … it’s practically the invite list for first-ballot Hall of Famers. Kings captain Dustin Brown won’t be joining any of those guys in the Hall, at least without buying a ticket. But to a man, the Kings spoke glowingly about his leadership. Brown is what we politely refer to as a divisive player, which is to say that fans of other teams universally hate him thanks to his occasionally borderline physical play and tendency to tumble dramatically at just the right moment to draw a penalty.

He’s also a ferocious worker on and off the ice, and he has a knack for scoring big goals at big moments. Losing teams drone endlessly about finding an identity; the Kings don’t need to look far for a reminder of theirs. He was the guy at center ice on Friday night, accepting the Stanley Cup from Gary Bettman for the second time in his career.

And now that it’s all over, some are already wondering whether the Kings should be called a dynasty. A great team, sure, and maybe even the league’s model franchise, but “dynasty” seems premature; even in the NHL’s era or ultra-parity, it feels like it should take more than two Cups to apply that label. So let’s set the bar at three, leaving the Kings one Cup away.

Of course, we should probably just go ahead and count them out. It’s a salary-cap league now. Repeat as champs? Three Cups in four years? Earn that full-fledged dynasty status? The Kings could never pull that off.

After all, they’re not supposed to.