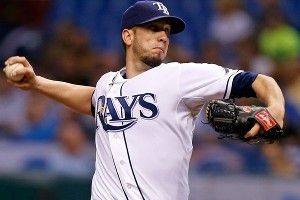 The blockbuster trade that swapped James Shields and Wade Davis for a package of prospects headed by Wil Myers has triggered more heated reactions than nearly any other deal in recent memory. The pro-Rays side sees Myers as a future superstar, one well worth a couple of years of Shields and whatever Davis has to offer — and that’s without three more attractive prospects coming to Tampa Bay. The pro-Royals side backs the acquisition of Shields and Davis as a bold and necessary move for a team that hasn’t made the playoffs in Felix Hernandez’s lifetime.

Read those takes. Definitely read Rany Jazayerli’s opus, which examines the trade from multiple angles, tying in the Royals’ long history of losing, and how surrendering Wil Myers and three other young, cheap players with upside will likely do more harm than good. What got me thinking isn’t player service time, the Royals’ window of opportunity, Myers’s swing plane, or the success rates for prospects — it’s something far less specific.

It’s the rigid and binary ways that we — fans, media, even general managers — think about team-building. And how the most effective decision-makers rarely consider only two possibilities when making a move.

For weeks, Royals general manager Dayton Moore happily provided insight into what he was trying to accomplish this offseason. “We want pitchers that have the mindset of a no. 1 starter,” he said a few days before the trade, one of several times in which he cited his desire for a new staff ace. Funny word that, ace. It evokes images of Tom Seaver and Pedro Martinez and Justin Verlander. It’s the dominant starter who’ll carry your staff, blaze through 225 innings, and start Game 1 of the World Series. It’s also a terribly limiting word. By fixating on some hard-to-find ideal, Moore established an arbitrary cutoff for the kind of pitcher he wanted. He also, whether consciously or unconsciously, shut out other possible ways for the Royals to improve their team.

This is how the Royals ended up trading Myers, Jake Odorizzi, Mike Montgomery, and Patrick Leonard for Shields (and Davis). By any objective standard, Shields is a very good pitcher. Somehow, be it his averaging 220-plus innings a year for the past six seasons, averaging nearly four strikeouts for every walk, going 81-65 in those six seasons, or just having that certain intangible something, the Royals decided that Shields was that rarest species of pitcher — a true ace. This meant that Moore could focus on acquiring him in a way that he wouldn’t in dealing with someone he deemed a lesser pitcher, be it someone like Brett Anderson, Jon Niese (both rumored to have been at least briefly discussed by the Royals), or someone else.

Though whittling down your search can help you devote the resources required to get a deal done, it can also end up hurting you. For one thing, the Royals’ known fascination with Shields the Ace handed additional leverage to the Rays — leverage the Rays used to get a boatload of dynamic young talent in return. But Moore did far more harm by limiting his options. If, in his mind, Zack Greinke was the only true ace on the open market, and Shields one of the few who might be had via trade, then he could safely ignore other team-building possibilities.

For instance, Anibal Sanchez. We already talked about Sanchez’s skill, and how the gap between him and Greinke is much smaller than you’d think. Sanchez is an even closer match for Shields using any number of metrics, from strikeout and walk rates to ERA and FIP (if not quite by innings pitched). So why didn’t the Royals simply open the vault for Sanchez and hang onto Myers, Odorizzi, and company?

There are plenty of possible, logical reasons here. Sanchez hasn’t signed with anyone yet, and it might be that he and his agent are waiting out the market until he’s clearly the best pitcher left, which would rightly make the Royals nervous. Maybe the multiple other pitchers still on the free-agent market (Edwin Jackson?) were deemed not worthy of major investments, or the other ones available in trade (R.A. Dickey?) not quite up to Shields’s talent level. Maybe Moore believes that free-agent pitchers are reluctant to come to Kansas City. Maybe the Royals were ready to spend eight figures on a starting pitcher for a year or two, but not for five or six. We can never know exactly what goes through a man’s mind at a critical moment, and Moore hasn’t volunteered every single aspect of his team-building thought process, despite his relative candor this offseason.

Still, I’d love to know a few things: Did the Royals fully ponder the potential surplus value that Myers and his three wingmen could provide for a low-revenue team with a known skinflint for an owner? Did they weigh that potential surplus value against the utility of overpaying someone like Sanchez by a few million dollars a year? Hell, did they consider Greinke? Did they mull the value of going after that elusive front-line pitcher in the first place, rather than tie up more than $20 million in 2013 spending on Ervin Santana and Jeremy Guthrie, apparently because Santana was available and Guthrie was happy to take their money? Did they realize how much Shields benefited from playing in front of an elite defense in a great pitcher’s park every year, and how he wouldn’t be afforded such luxuries in KC? Did they reflect on Shields’s slightly diminished utility, given one of his biggest strengths is his ability to go deep into a game, and the single biggest strength of the Royals’ major-league roster is their really good bullpen? Did they ponder how much more value Myers might provide over incumbent right fielder Jeff Francoeur, and how leaving the job in Francoeur’s hands could negate much of the gains realized by trading their top prospect for virtually anyone? Did they consider keeping Myers and trading Billy Butler for a pitcher instead, thereby giving up an excellent hitter, but also a player who’s a negative in every other tangible skill, from defense to positional value to baserunning?

Or did the Royals simply zone in on that elusive ace figure, the one who’s seduced everyone from respected writers to savvy pro scouts and can be reasonably represented by James Shields but not Anibal Sanchez, despite fairly similar recent résumés? Did they decide that Myers and friends had to be the bait, because the time to win is now, which means you can’t touch the major-league roster … and besides, prospects are a crapshoot, and an ace is a sure thing? Given everything that Moore has said this offseason, we’ll have to go with “yes” and “yes.”

The Rays are every bit as thrifty and revenue-deficient (exactly as much, actually) as the Royals. They’re also trying to win in 2013. But one thing the Rays rarely do is box themselves into a decision by thinking in terms of labels, or framing problems as having only one or two solutions. Offense a problem? They could sign a veteran free agent the way they did with a pair of lefty bats last offseason … or go after a marquee player like Justin Upton in a trade … or deal Shields and Davis for Myers, snagging offensive potential for now and for later, and freeing up $12 million-plus to go make another trade … or another signing. If a given offseason’s free-agent crop is thin, they’ll find another way to acquire talent, rather than let themselves be hamstrung by obvious, and lousy choices.

They make bad moves all the time, just like anyone else. Troy Percival. Pat Burrell. Carlos Pena (the second time). Trading John Jaso for Josh Lueke. Plenty of others. But they’re thinking, creatively and constantly, in a way that rankles some in the industry but also allows them to explore every option when it comes to squeezing the most wins out of bargain-basement rosters. They won’t obsess over landing a no. 3 hitter or a 30-home-run guy, won’t overemphasize the gaps between veterans and prospects, very good starters and supposed aces.

This is why they’re so unpredictable. The Rays don’t go into Hot Stove season by saying, “These are our holes, these are the players out there, let’s fill those holes.” Their conversations usually start with a simpler, more wide-open premise: How can we become a better team?

It’s entirely possible that the Royals strike gold in this trade, that Shields flashes his 2011 Cy Young form, and Davis blossoms. Maybe Myers disappoints and the other new Rays flounder. But in the long run, thinking of multiple solutions to a problem, of a range of possible outcomes rather than one or two absolutes, will help teams avoid blind spots that can lead to poor decisions. It gives them a better chance to do more with less.

The Royals didn’t necessarily make a terrible deal. They just showed a terrible lack of imagination. In the long run, that might be what hurts them the most.