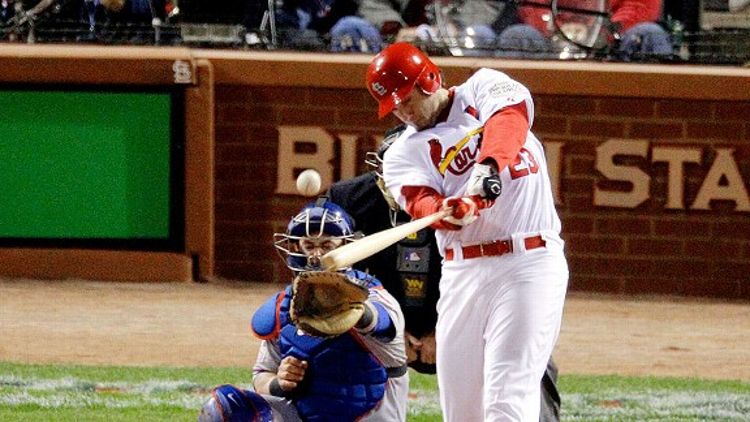 1. David Freese, St. Louis Cardinals
Any time you more or less live out the lifelong dream of every American child born since the invention of the Hershey’s Bar, you get your name at the top of our power rankings. I don’t care if we’re ranking the biggest G’s in Western Hemisphere needlepoint; David Freese wins everything.

2. Case Keenum, Houston Cougars
A personal favorite of your author (he’s quarterbacked my erratic fantasy college team for two seasons), Case Keenum was actually nominated by Grantland’s Shane Ryan. From Shane: “My nomination is Houston quarterback Case Keenum. With his nine touchdown passes against Rice last Thursday, he became the all-time FBS leader in career touchdown passes. A week earlier, he set the FBS record for total offense in a career. And he’s not just a long-term guy; thus far in 2011, he has the most passing yards, most touchdowns (32), and is tied for the fewest interceptions among top 50 quarterbacks (3) despite over 300 attempts. He’s also the second-highest rated QB behind Russell Wilson, and he’s led Houston to an undefeated record. He should be the undisputed leader in the Heisman race, but instead he gets almost no buzz and probably won’t even be nominated. Only Rankonia can right this wrong!”

We can try, Shane. But in the meantime, we’ll get to forging a statue in the pose of Andre 3000 on the cover of Stankonia. That would be much more tight than the Heisman any old way.

4. Luis Suarez, Liverpool
Nutmeg plus curling shot into the upper right-hand corner? From distance? In front of a hostile (what a surprise!) Stoke crowd in a midweek Carling Cup match? Take a bow, Luis Suarez.

5. The City of Atlanta
In the words of David Cho: “For getting to see the Watch the Throne tour before everyone else.” I will add this: Georgia Tech? That shit CRAY!

6.  Soulja Boy, rapper/surfer/investor
Speaking of Atlanta, our resident ATL-ien, Rembert Browne, shouts out Atlanta MC Soulja Boy and his E*Trade account. Are you part of the 1 percent? The 99 percent? Or the 30 thousand, 100 million percent?

7. The Word “Wow”
Via Triangle co-boss Sarah Larimer, the word has kind of taken on a new resonance after novelist Mona Simpson’s remembrance of her brother, Steve Jobs, in the New York Times.

8. Marcell Dareus, Buffalo Bills
The Bills rookie moved from defensive end to nose tackle this weekend. Then went out of his mind, grabbing himself 2.5 sacks and two additional tackles for a loss. Peep John Beck’s nightmares.

9. Jonas Hiller, Anaheim Ducks
Via Coldhearted Katie Bakes, who made mention of Hiller in her Goalies of the Week post last Friday. In honor of Movember, the Ducks goalie is wearing a mask featuring his Anaheim teammates wearing fake mustaches. It’s all part of the November-long campaign to raise awareness about men’s health issues.

10. Tony La Russa, retired
Thanks for the memories.

Previously by Chris Ryan:
The Reducer: Week 10, Happiness Is a Warm Gun
So, Detroit, What Do You Think of Tim Tebow Now?
Tony La Russa Retires
Watch Steve Buscemi Die Over And Over Again
The Philadelphia Eagles’ Asante Samuel Ruffles Some Feathers
Is Tebowing the New Planking?