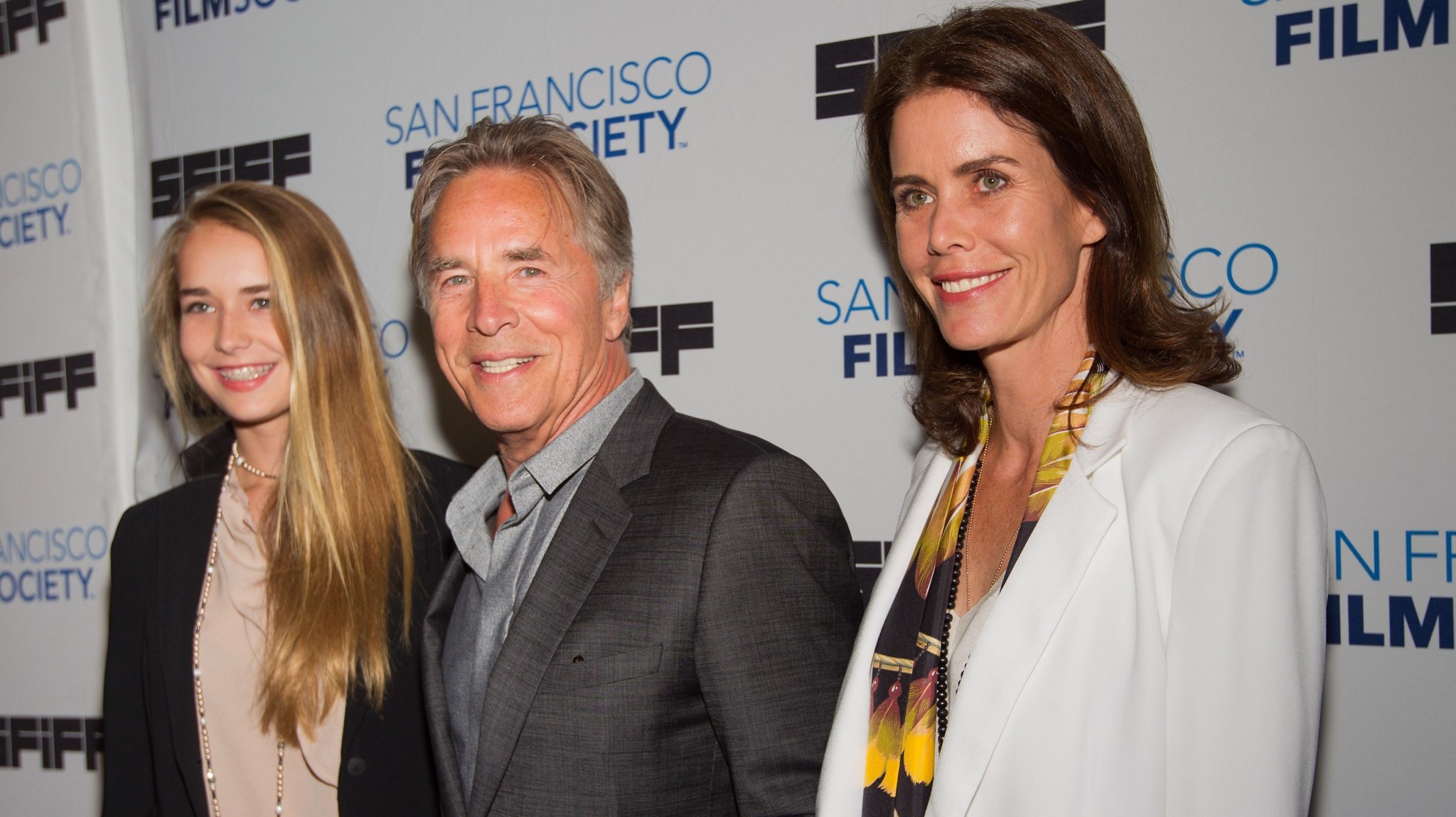 OK, just a quick public service announcement at the end of the day here. Amos Barshad interviewed Don Johnson on the Hollywood Prospectus last week, and they covered a wide range of topics. Read the whole thing, because Don Johnson has reached the Kobe era of his career, when he’s too old to care about censoring anything. But for our purposes, we had to highlight this section:

You’ve gotten to do some great stuff on TV recently. Eastbound & Down is one of my favorite shows.

Well, that’s funny. I hadn’t even seen the show, and they sent me the script, and my agent said, “Oh no, you gotta see this!” And I watched it and I was like, “Wow! These guys are doing some edgy cool shit!” And I thought, I can make this even more outrageous than what they’ve written. I went down there and it was like putting on a comfortable pair of blue jeans. I’ve actually written something that [Eastbound codirector] David Gordon Green is attached to direct. I’m gonna do it for streaming.

It’s called Score and it’s set in the ’80s, and it’s about the rise of big-time college football. I play this outrageous fucking coach who breaks all the rules and recruits basically criminals and everybody else and shoots the finger [extends middle finger in my direction] to the NCAA.

Can we make this show tomorrow?

“I wrote it in October,” Johnson adds. “And I wanna get it financed completely so I can go to the marketplace without layers and layers of executives and bureaucrats. In my mind if you’re not bringing something to the dance, but you’re taking a big chunk of the cash, I got no room for you.”

Do you have valuables? Sell those valuables and donate the proceeds to Don. We all need this show. 1980s college football was basically one long hallucination of corruption, sex, and coaches who were all living caricatures. It was always destined to turn into an HBO show. There’s so much material out there, it’s hard to decide who Don should model his character after.

“Some guys could recruit tremendously for three months, but they couldn’t close the deal,” Glanville said. “Sometimes you’ve got to get mad at a guy as you recruit him and you’ve got to close the deal. I can’t tell you how many times I told a guy I’m glad that he committed and he never really did. I’d say, ‘Let me go tell your mom!’ And he’d say, ‘You’re telling my mom? Oh, God, I just committed?'”

Then there was the recruit who informed Glanville that he had decided to commit to Tennessee, where the player’s father was in the Hall of Fame, and that he planned to announce it at a news conference that afternoon. “I said, ‘That’s nice. Let me take you for a milkshake and I’ll bring you back for the press conference,'” Glanville said. “He got in my Buick Riviera, and I drove him to Atlanta and enrolled him at Georgia Tech. And they were sitting up there waiting for the press conference. Close the deal!”

We didn’t have a quota system back then. People were recruiting the black athletes because of the quota. That’s bullshit. I was doing it because it was the right thing to do and I wanted to recruit whoever gave us the best chance to win. I wanted to recruit every player based on his talent and ability to play the game and what kind of person he is. And nothing else matters. And all my coaches, thank goodness, all believed the same thing or else they were going to be coaching with the wrong guy if they didn’t. People recognized that immediately. That that’s the way we were, and that’s the way Oklahoma was.

We were playing Texas when there wasn’t a black player on their team. I had guys like our running back Greg Pruitt and Joe Washington put a couple hundred yards on their ass and puttin’ half a hundred on ’em.

What about Jimmy Johnson?

Before the Hurricanes came “through the smoke,” coach Jimmy Johnson stood on a bench in the Miami locker room and delivered a message that left no room for interpretation. “Pour it on ’em,” Johnson said, with his perfectly-quaffed hair bouncing and his face going purple. “Pour it on ’em and don’t let ’em up.”

The Hurricanes did just that. Miami routed the nation’s most popular team in college football in merciless fashion, 58-7. The blowout brought criticism upon UM.

“What surprises me is to humiliate a coach on the other sideline.” CBS announcer Brent Musburger said. Musburger’s partner and former Notre Dame coach Ara Parseghian was predictably sympathetic to the Notre Dame plight. “I think this is the time for Jimmy Johnson to run the ball and show some compassion. This game is over,” he said.

The game might have been over, but the Notre Dame anger was not. The fourth-quarter brought late hits and injected bad blood between the two teams. The discontent would help create the most compelling rivalry in college football. 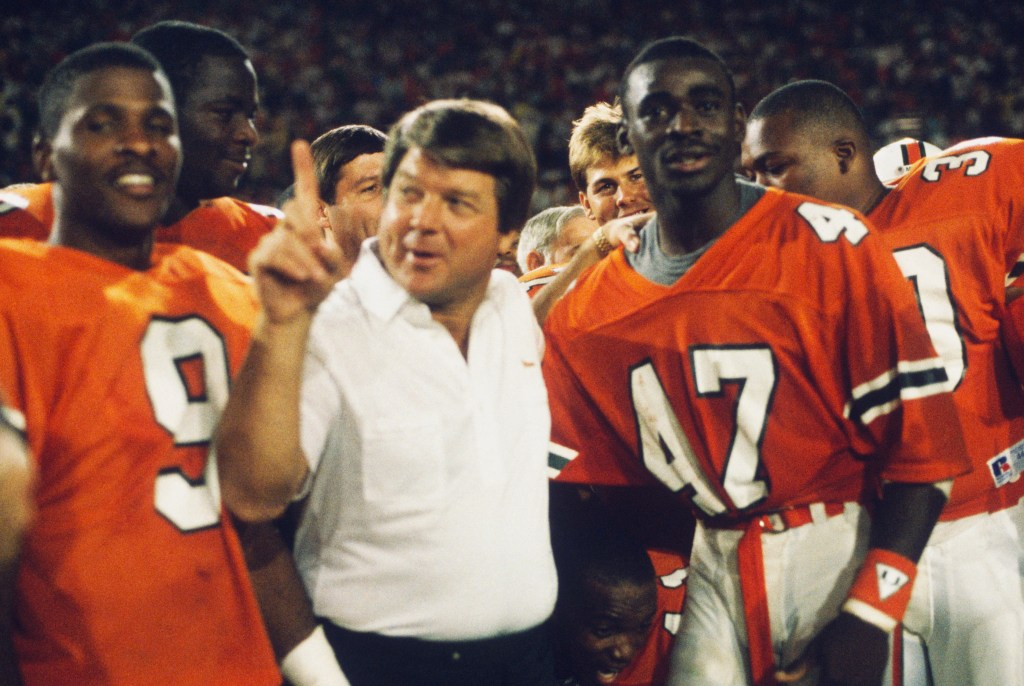 Yeah, so the answer’s probably Jimmy Johnson. They already kinda look alike, and if Don Johnson’s making a show about any kind of excess in the 1980s, we might as well set it in South Florida.

We can figure out the details later. But you know how you don’t realize how badly you need something until it arrives? That’s how I feel about this Don Johnson idea. We need another Eastbound & Down, and we need a show about college football on HBO. We need “this outrageous fucking coach who breaks all the rules and recruits basically criminals and everybody else and shoots the finger to the NCAA.” If you see Don Johnson on the street, tell him good luck and give him $40 to get him started.

The Weirdest of the Weirdos: Manu Ginobili and the Spurs' Exception to Their Rules