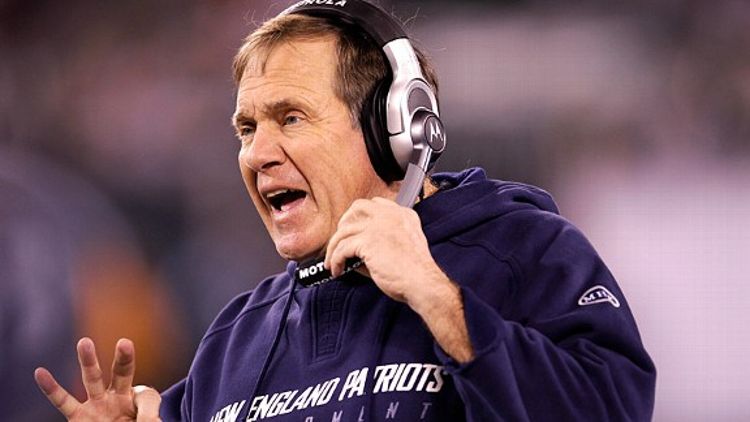 1. Bill Belichick, New England Patriots
Sunday night was many things, it was an opportunity for Mark Sanchez to pour lighter fluid and a lit Zippo on his reputation, it was a chance for Chad Ochocinco to get somewhat more involved in the New England game plan, and it was an opportunity for Rex Ryan to get more involved in fan relations. But ultimately, it was a chance for Bill Belichick to do what he does best; take a bunch of guys off the trash heap and have them looking like the ’86 Giants. Andre Carter? Rob Ninkovich? Julian Edelman blowing up LaDainian Tomlinson? You know it was a good coaching job if Belichick himself was (allegedly), um, impressed with his performance.

2. DeMarco Murray, Dallas Cowboys
Jerry Jones is probably going to have Felix Jones get his high ankle sprain checked out by some Swiss muscle expert, just to be sure! Take your time! Don’t rush! Murray has 674 yards on 100 carries this season. Cam Newton, that galloping you hear in the background is the former Sooner coming for your Rookie of the Year award.

3. Marion Berry, politician
From Rembert Browne, who, in his spare time is working on a mural of great ’80s American mayors (and seconded by Sarah Larimer): “Just joined Twitter. He has no idea what he’s doing. He will be mayor of D.C. again by Thanksgiving.”

4. Ed Belfour, former goalie
Via Katie Baker: “He’s one of four guys who just was inducted into the Hockey Hall of Fame (other three, in case you have a personal love for one of them, were Joe Nieuwendyk, Doug Gilmour, and Mark Howe, son of Gordie), but only Eddie is a complete and utter maniacccccccccccc. I enjoyed this, for example.”

5. Pusha T, rapper
Rankonia’s first-ever repeat appearance. Push showed up in the inaugural rankings because he threw an epic Ric Flair sample on a song. This week, the Virginia rapper (as nominated by Grantland’s own version of the Clipse, Bill Barnwell and David Jacoby) makes the top ten by spitting some very Nature Boy-esque braggadocio in this Onion A.V. Club interview: “I just know that whatever it is that I do, I’m going to be good at it, and successful at it. I’m never going to struggle. I’m not going through any of that shit. I’m a winner, man.” That’s a design for life. Note: Barnwell also voted for David Akers, but this is my list, and I’m from Philly. Akers used to kick for the Eagles and now their kicker looks like Sam Weir from Freaks and Geeks, so I’m going to make an executive decision and say, “no go.”

6. Dan Goodale, Boise State
As nominated by Michael Weinreb. Only kickers will break your heart, Idahoans. And this freshman broke yours in such spectacular fashion, it was perversely impressive. Sidebar: I feel like if Chris Petersen got Pusha T in a room with Goodale before Boise State’s game last weekend against TCU, this would have never happened:

8. Edson Buddle, USMNT
Buddle, who usually can be found taking in the cathedrals and cuisine of Bavaria when he’s not playing for German second division team FC Ingolstadt 04, gave Jurgen Klinsmann and the USMNT a much-needed goal on Tuesday. The former LA Galaxy striker, perhaps feeling some magic due to the misty conditions, pulled this rabbit out of a hat early in the US-Slovenia match:

9. John Henson, University of North Carolina
As nominated by Jay Kang: “He had 9 blocks and looked superhuman on defense out on that aircraft carrier.” This is the truth. I hope some of those guys who played in the Carrier Classic were bestowed official call signs by the Navy. It’s just too amazing to imagine Harrison Barnes and Tyler Zeller calling each other “Maverick” and “Merlin.”

10. Mike Krzyzewski, Duke University
From Duke partisan Shane Ryan: “He just broke Bobby Knight’s all-time record for wins in Division I basketball and once a revered college coach has won the most games in his sport, NOTHING can tarnish his legacy.” I SEE WHAT YOU DID THERE.