Beyond the Blue Turf: Can Derrick Marks Lead Boise State to the NCAA Tournament? 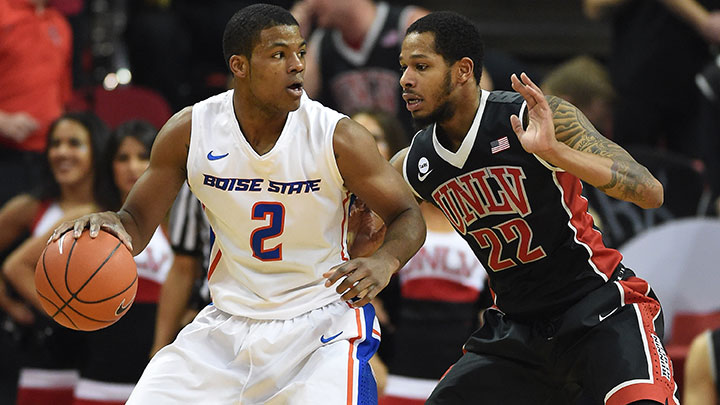 Craig Robinson, the president’s brother-in-law, was courtside, working the late-January game as an analyst for ESPNU. Behind him, scattered among the orange-and-blue seats of Boise State’s unappetizing Taco Bell Arena, were 5,682 diehards whose Tuesday schedules could accommodate a 9 p.m. Mountain Time tip. Down from Robinson, and dressed like a man who might sell you discount mufflers, Colorado State head coach Larry Eustachy had a premium view. All of them witnessed a seven-minute stretch of individual basketball as entertaining as college hoops fans will see all season.

With seven minutes to go and his team trailing seven points behind the visiting Rams — a ranked rival who’d ripped off 18 wins in their first 20 games — Derrick Marks, Boise’s senior guard, dribbled out of a double-team in the post and found a streaking teammate for an uncontested layup. On the next possession, he drove hard along the baseline and finished in traffic. Then a hanging bank shot with a man on his hip. A pair of free throws. A little crossover and smooth pull-up. A 3-pointer just in front of the bucking bronco decal at midcourt. Another pair of free throws. A one-handed assist to a backdoor cutter out of a triple-team. And finally, the play of the night: Down a bucket with 1:20 remaining, Marks trapped Colorado State’s J.J. Avila on the sideline, poked the ball loose, and released down the right wing. An outlet pass found him all alone in the corner, and as a Ram rushed to close out, Marks gave a faint head fake, lifted, and pulled — no way that sucker was rimming out.

During the ensuing timeout, having single-handedly secured an advantage the hosts would not relinquish, Marks draped his arm over an assistant coach’s shoulder and gasped for air. With 26 second-half points on just 11 shots, 21 of them coming after the under-eight media timeout, the presumptive and improbable Mountain West Player of the Year had earned his breather.

“He’s the best player in the league,” Eustachy would say afterward. “He just went about his business and totally dominated our game in the second half.” On the podium, Broncos head coach Leon Rice was even more direct: “Thank god for Derrick Marks.”

Rice landed in Idaho five years ago. It was his first Division I head-coaching job, and he says the team he signed up to lead, four hours south of the Washington town in which he grew up, “felt like it was a bit of a sleeping giant.” Before Rice arrived, Boise State had qualified for the NCAA tournament just five times, despite playing in wishy-washy conferences like the WAC and the Big Sky. No one went to the games. “It was a program that existed,” says Dave Southorn, a Broncos beat reporter for the Idaho Statesman.

The example set on the school’s Smurf-blue gridiron loomed large. The athletic department had proven it could support a creative national power. The hardwood, it seemed, was another natural target for an overhaul. In the summer before Rice’s second season, the school opened the Arguinchona Basketball Complex, a 10,000-square-foot practice facility with fancy lounges and high-tech gadgets. It also joined a new league with legitimate basketball chops: the Mountain West. 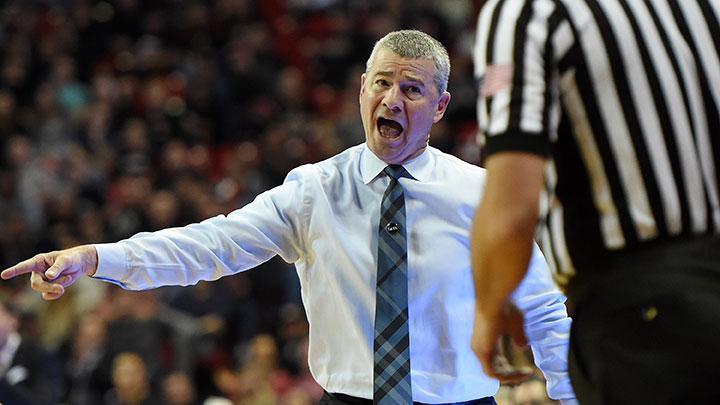 A few months after that transition, Mark Coyle was hired as athletic director straight from the University of Kentucky, where he’d served as the men’s basketball administrator. Rice brought along his own bona fides. For 11 seasons, he’d been Mark Few’s right-hand man at Gonzaga, orchestrating that charming Pacific Northwestern revival. Before Few made clear that he wasn’t angling to leave Spokane, it was Rice — a gifted recruiter with the bearing of a friendly dentist — who insiders assumed was next in the Zags’ line of succession.

“We still go back and forth all the time, and we bounce a lot of ideas off each other,” Rice says of Few. “You’ll see a lot of similarities in our programs.” On offense, that includes variations of the Euro-style flex system that Few favors: picks, flashes, and urgent pops to create spacing and mismatches for shooters. And like other mid-majors that have successfully punched above their weight, Boise State under Rice wants to find players with a few solid skills who are willing to put in work: “We want families that want to send their sons to a place that wants them to get better. We put a lot of pride in development.”

Boise is a long way from Plainfield, Illinois, where Marks went to high school. On his official visit, in the fall of 2010, he saw mountains for the first time. The ESPN College GameDay crew was also in town, still the only time the football preview show has been broadcast from Bronco Stadium. “When I first came to Boise,” Marks says, “I didn’t know anything about Boise except for the blue turf.”

If Rice could convince the young man to go west, he knew his ball club would get a slashing guard with a sturdy physique. They likened him to Jeremy Pargo, another Chicagoan with moxie whom Rice coached at Gonzaga. It was the shooting stroke that left something to be desired. “When you’re a strong, aggressive kid,” says Steve Lamberti, Marks’s high school coach, “and you can score fairly easily at that middle-school level in the paint, and even as you get into high school, sometimes you don’t necessarily need to shoot the basketball.” As a senior, one scouting service listed Marks as just the 37th-best prospect in his own state.1 Most anointed him a two-star recruit with limited D-1 options.

“Derrick’s dad walked into my gym, this big man,” says Derek Molis, owner of The Athlete Within Basketball School in suburban Chicago, about his first meeting with Derrick Marks Sr., five years ago. “And he told me, ‘Well, my son can do just about anything on a basketball court, but sometimes he can’t throw the ball in the ocean.’” The trio has now spent 500 hours in training together, gradually correcting faulty footwork and body control. “From day one, he has been ready to learn,” Molis says. “Not every kid is like that, especially in this age of basketball.” 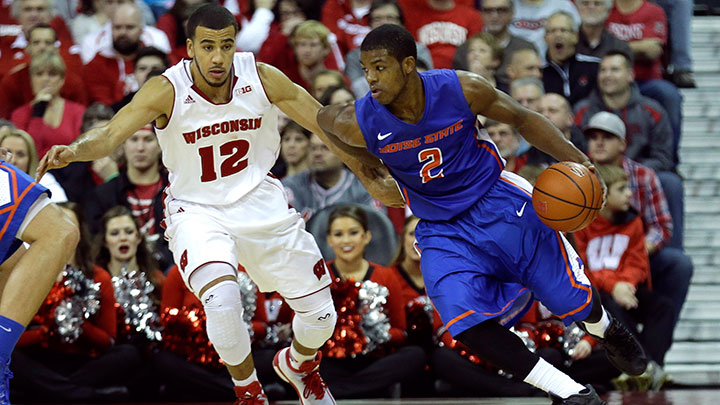 That Boise State (20-7, 10-4) finds itself in the thick of the Mountain West title chase is not surprising in and of itself: Rice has registered 21-win seasons each of the past two campaigns, and the Broncos were picked to finish second in the conference preseason media poll. What’s surprising is how they’ve muscled themselves into contention. They’ve done so largely without the services of Anthony Drmic, the program’s leading scorer for three straight seasons, an Aussie who battled back and ankle problems all fall and was finally ruled out for the season on December 30. The Broncos proceeded to lose the first three league games without their star. “There was probably a mourning period,” Rice says. “Then there was an adjustment period of trying to figure out who could fill those holes, and that took a little time.”

Well, Marks has filled each and every one of them. Since the calendar flipped, he has averaged 23.2 points per game. Like last year’s conference player of the year, San Diego State’s Xavier Thames, Marks can still throw defenders off with powerful bursts and cheeky hesitation dribbles, but it’s his perimeter shooting, the early bugaboo, that’s burying opponents like a Rocky Mountain avalanche. As a freshman, 37 percent of Marks’s shot attempts came at the rim. This year, that figure has fallen by nearly 20 percentage points. He’s hit 48.2 percent of his 3s, seventh in the nation among players with at least 95 attempts. Marks credits the Special Olympics, of all things, for his late-career accuracy. In a charity game last spring, he stepped the wrong way and tore his meniscus. While his knee rested, he forced up 1,000 jumpers a day while seated on a chair.

Winners of 10 of their last 11, Marks and the Broncos have returned to a familiar February position: perched delicately on the NCAA tournament bubble. With a fairly deep bench and marksmen up and down the roster, Rice likes their chances. “We’re going to have to play exceptionally well down the stretch,” he says. “But there aren’t many teams that control their own destiny, and we are certainly one of them.”

The coach interviewed for the Washington State job 11 months ago, before withdrawing his name from consideration, leaving a potentially huge pay bump on the table. Marks, meanwhile, won’t even entertain questions about his future beyond the Mountain West tournament. Both want nothing more than to give that sleeping Idaho giant a few tugs on the arm. “People get that feeling that football is now here and it’s established, it’s no flash in the pan,” says the Statesman’s Southorn. “A lot of people think basketball could be next.”

That Was a Thing: Sports Phone, the 1980s Way to Get Real-Time Scores