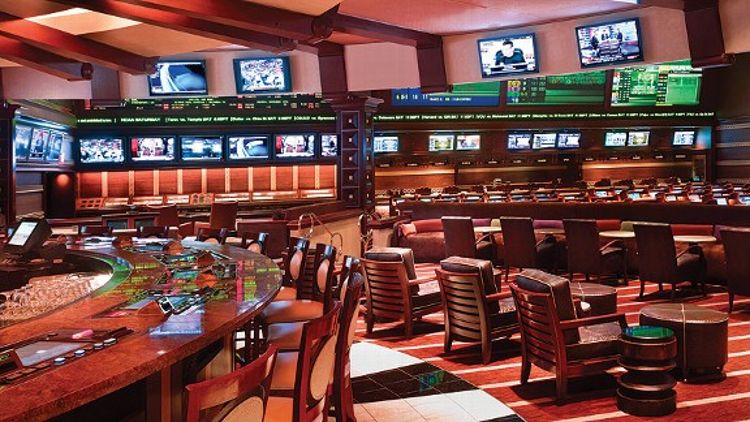 This week, our sportsbook review heads to what might be Vegas’s most luxurious resort: the Wynn. Opened by casino magnate and namesake Steve Wynn in 2005, the hotel and its attached sister property, Encore, cost about $5 billion to build at the peak of the Vegas megacasino boom. It’s the only hotel on the strip with its own golf course, and in our humble-yet-unbiased opinion, the Wynn is home to the nicest “standard” hotel rooms in all of Vegas. The casino is also a safe havens for vegans or vegetarians traveling to Vegas, as Wynn himself became a vegan in 2010 and promptly instructed all of the restaurants on his properties to offer a variety of vegan dishes. So if you’re traveling to Sin City with a carnivore, you can head to the Switch steakhouse in Encore and get the tofu carpaccio or the vegan meatloaf.

We’re here to talk about the sportsbook, though, and the Wynn’s book is its own animal. The operative term for this sportsbook is “boutique hotel”. The Wynn’s sportsbook is certainly smaller than the mammoth open spaces carved out by the Caesars Palace and The Mirage books, but it uses that space extremely well. This is, seat-for-seat, one of the most comfortable Sunday NFL experiences in the entire city.

While the idea of a boutique hotel might inspire images of raucous hipsters throwing Entertainment 720-style parties in the sportsbook, the Wynn is actually one of the more reserved and sedate locations to watch football on the strip. When we were on the scene this past Sunday, there was more polite applause than desperate shouting at the screen, and that only happened after big plays. One group of Saints fans in the back of the book occasionally got “Who Dat?” chants going, but that only happened three or four times over the course of the game. If you are looking for something resembling the experience of being at eight NFL games at once, you might want to go elsewhere. The experience here is more like watching games with a crowd in your rich uncle’s living room.

The Wynn book really excels, though, in getting a lot of the small things right. The sports section of the book only has 23 chairs in its primary section, but those chairs are heavenly leather swivel chairs that I wanted to try and steal. The televisions, both on the wall and at the racing seats, are top of the line. When the primary game on their big screen is in commercial, the book switches the audio to one of the secondary games and vice versa. They’re fair about the realities of the betting process. When they announced “last call” for bets on the early-afternoon games, we decided to place a last-second bet on the Texans as 3.5-point favorites. As we got to the betting window, we were cut off by an elderly lady who wanted to bet $5 on a horse race later that day while taking her sweet time in the process. Not only did the Wynn still take my bet after the lady had finished hers and the Texans game had started, but they handed me my betting slip even as the Texans were celebrating their touchdown on the opening play from scrimmage. That’s classy.

Class, of course, comes with a price. While the Wynn will give you some of the best odds in the city, you’re also going to be paying a lot for your drinks if you want to sit around and see those bets through.

Drinks: The Wynn is yet another book that operates on the drink ticket system, and these are some of the most expensive tickets on the Strip. To get just one of those tickets, you’ll need to shell out $200 on sports bets or $10 on the horses. Ouch. Executive Director John Avello noted to us that the book is often pretty flexible about the price, and that an initial bet or series of bets totaling $125-$150 or so is usually enough to get a drink ticket. We’ve found that to be true ourselves when going to the book, but on the other hand, we’ve also been told that we needed to bet a whopping $300 on sports to get another one. So $200 is a safe number. On the bright side, the waitress service in the sports section of the book is very reliable, so if you do have drink tickets, you will get your drinks about as quickly as you could hope for.

If you’re looking to get drunk at a cheaper rate — or, for some reason, sober up — the Zoozacrackers deli and bar behind the book serves domestic bottles for $6.50 and 12-ounce drafts for $7.50. The deli serves up tasty (if expensive) sandwiches, but the real kicker is that you can order those sandwiches in Zoozacrackers and then get them delivered to your seat in the book when they’re ready.

Seating: As we mentioned, this is not a huge space. The primary sports section has 23 of those incredible swivel chairs; there’s a lounge behind it with 75 more seats, but those are in an enclosed area with a partial view of the sportsbook. (There’s a VIP section in between the two, but obviously, we weren’t going in there.) The rest of the space in the book is assigned to 100 racing stations, each of which has its own television. The leather chairs here aren’t as nice as the swivel chairs in the sports section, but they’re better than about 95 percent of the chairs on the rest of the strip. On fall weekends that don’t conflict with a significant horse race, these seats are split 50/50 among race bettors and sports bettors. And while most of the TVs at horse racing seats around Vegas only get feeds from racetracks, the individual televisions at the Wynn got the NFL games as well.

Timing/Reservations: Since seats at the Wynn can be at a premium, we asked Avello about how a party of four could ensure that they would end up with a chairs on Sundays. His best suggestion: Stay at the hotel. If you’re going to be a guest of the Wynn, you can call the hotel itself, ask for the sportsbook, and reserve seats for you and your party in advance of the Sunday in question. If you’re not staying at the Wynn, Avello recommended that your party of four get to the book by 8:30 a.m. at the latest to ensure seats for everyone.

One recommendation from our experience, though: You might not wait until the last minute to place your bets. Until about three minutes before kickoff at 10 a.m., there was a line snaking through the center of the book all the way out onto the casino floor with people waiting to place bets. At one point, a tortured soul cried out to nobody in particular, “This is ridiculous. Nine minutes before gametime and the line out there is 30 deep. That’s ridiculous.”

Televisions: Ah, the televisions. As you can see from the photo above, the Wynn does not often lack for screens. It turned out, though, that one of those days where it does lack was the Sunday I was there. With ten games going on simultaneously during the early-afternoon timeslot, the Wynn was faced with a conundrum. The sports section of the book has nine televisions on the wall, which meant that one game would not be shown. The book chose to avoid airing the Dolphins-Redskins game, so it made a pretty wise choice. In addition to those nine televisions, the Wynn has six more large televisions on the opposite (racing side) wall of the book, and nine smaller televisions behind the betting windows. All of those televisions have to bow to the three monster screens above the betting area, though. On Sunday, one of those monster screens showed football, while another showed a horse race, and the third was split into four smaller images that each showed other races.

The Wynn is great for a very specific type of person. If you’re staying at the hotel, have money to spend, or want a comfortable experience that won’t leave you with a headache, it’s just about the best sportsbook in the city. If your goal is to scream bloody murder at the television and get rip-roaringly drunk without spending the few pennies you have left, there are probably other venues that fit your inebrial urges.

This line movement is a little smaller than it actually seems, since it’s easier to move a one-point line by a point than any other, but it’s still a pretty hefty swing. Of course, this move comes thanks to the shellacking that the Packers laid on Minnesota Monday night. Then again, the Raiders aren’t exactly the Packers, so it wouldn’t be a surprise to see this line become a pick ’em by Sunday.

Although the Eagles had the more embarrassing loss of these two teams last Sunday, the market had moved this line down to 3.5 points before the news of Michael Vick’s broken ribs hit the wires. It was taken off of the board in some books on Monday, but when it came back, the line quickly moved to 4.5 points. If news comes out that Vick will be unable or even unlikely to play, it could keep moving away from the Eagles, perhaps all the way to +6.

Palkomania! While the Patriots were celebrating their victory over the Jets with two days off, they got the news that former teammate Matt Cassel had suffered a hand injury that would keep him out of their reunion on Monday Night Football in Week 11. With backup Tyler Palko in the fold, the line moved three full points and crossed the key number of 14 in the process. Of course, the last line to hit 15 points during the week was the Eagles-Cardinals spread, where a backup quarterback came out East to face a dominant offense that would surely slaughter them. And how did that go again?