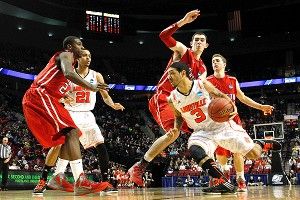 Outside of the Super Bowl, no event inspires more throngs of people to pack Vegas sportsbooks than the opening two rounds of March Madness. And while the Super Bowl is just one ridiculous day, the bevy of betting that surrounds March Madness is a four-day marathon that starts, bright and early, at 9:15 a.m. Thursday morning. If Vegas is specifically that weird place in the world where you spend more time thinking about the appropriate time to transition directly from coffee to beer, March Madness is perhaps the quintessential Vegas experience.

With that in mind, I wanted to continue the series of sportsbook reviews that I put together during the football season by heading to Vegas’s bellwether book, the LVH (formerly the Las Vegas Hilton). I wrote a little about the LVH and its reputation as the best futures and props book in the city last month, but I also wanted to capture a specific aspect of the LVH experience that helps it stand out from the rest of Vegas’s books.

On Sundays during football season and for the first several days of the NCAA Tournament, the LVH opens up its theatre to accommodate the hordes of gamblers desperate to get action in and watch their bets play out. What does that mean? Well, imagine being in the largest living room you can think of and start there. There’s more than 1,500 seats, $2 beers (and hot dogs), theatre-specific betting windows stationed steps away and projectors pushing every game onto gigantic screens on the theatre’s stage. Yes, it’s impressive that you can watch every game on your computer or your phone now. I promise you that this was more fun. In fact, we went for the relatively awful slate of finishes on Thursday; I can only imagine that it was even more of a blast on Friday.

Oh, we? Well, this was too big of a project for one man to do alone. For the overwhelming insanity of March Madness, I had to enlist the help of my Grantland colleague, Jonah Keri, and his small army of bros. Jonah!

Jonah: The most exciting six-point game I’ve ever watched. That’s what I’ll remember from Day 1 of the NCAA tournament at the Las Vegas Hilton, my first time ever watching the tournament from a sportsbook (or in this case, a theater set up to show games on giant screens).

Barnwell, a few buddies from Brooklyn and I arrived at LVH two hours before any self-respecting Vegas visitor should even be awake. By 9:30 a.m. we’d loaded up with as many bets as we could. Other than betting the field -300 against “That SEC School” to win it all, every bet was for that day, meaning we’d get either instant gratification, or failure. The first thing you notice when watching games in Vegas is the preponderance of chalk chasers — people love to bet favorites. We had a few theories as to why that might be: Maybe the masses don’t know any better than to bet on big-name teams; maybe people like to back their alma mater, and you’re more likely to find North Carolina and Wisconsin grads in Vegas than you would Davidson or Norfolk State grads; or maybe it is simply that betting the money line on a favorite, though lacking attractive odds, has a high probability of success. Whatever the case, it makes it tough to root for underdogs, whether you bet on them, or just want to see a no. 15 seed take down a no. 2.

But if you go with the crowd and the favorite has a chance to pull off a big win? It’s electric.

Bill: That exciting six-point game was the Kansas State-Southern Mississippi tilt, where an otherwise meaningless final few minutes made a hero out of innocuous KSU point guard Angel Rodriguez.

Now, you have to realize that a basketball game is different from just about any other sport in terms of betting and game flow. In just about every sport, your bet against the spread is either going to be a winner or a loser for a relatively long period of time. That is to say, even a close football game isn’t likely to have very many scoring situations that would cause a bet against the spread to go from looking like a winner to looking like a loser. Only basketball has the scoring frequency to make that change from possession to possession.

As it turns out, that’s exactly what happened with our assorted bets on Kansas State, who was favored by five points. During the final five minutes of the fourth quarter, virtually every possession of this game saw one team or the other have the opportunity to turn a winning bet on one side of the spread into a loser or vice versa. And oh, the crowd in Vegas knew it. While most of the people in the actual stands in Pittsburgh had already gone to the concession stands and written off what looked to be a clear Kansas State victory, the 1,500 people packing the LVH theatre were hanging on every basket.

At the heart of that frenzy was Rodriguez, who played a bigger role in determining the winning bettors than he might have played in determining the actual winner of the game. Rodriguez was 4-of-11 from the field with three turnovers and four assists, but oh, can he shoot free throws when he needs to. When Southern Miss’s Darnell Dodson missed a three that would have made it a one-point game with 32 seconds left, Rodriguez was fouled and promptly hit both free throws to make the score 67-61, turning what had been a Southern Miss cover into a backdoor Kansas State cover.

On the ensuing possession, Southern Miss missed another three and fouled KSU forward Jamar Samuels when he got the defensive board, seemingly sealing the win for KSU betters and their five-point spread. It was here where Jonah’s friends made a crucial mistake. They started to pat each other on the back, high-five, and celebrate their narrow victory. I peeked out of the corner of my eye at the screen and noticed that there were 14 seconds left. I knew what was coming as a result of their hubris, but I kept my mouth shut. It’s a lesson we all have to learn.

You can probably guess what happened. Samuels missed his first free throw before making his second, giving KSU a seven-second lead with 14 ticks remaining. The Southern Miss bettors began to buzz. They had a prayer. There was no doubt in my mind that it would be answered. Sure enough, SMU’s Cedric Jenkins — a 14.3 percent shooter from downtown this year — got the ball down the court and drained a 25-footer to cut the Kansas State lead to four and turn Southern Mississippi bettors into winners. The few Southern Miss bettors in the crowd roared with delight. Jonah’s friends slumped into their chairs, defeated men, instantly aware that their celebration was hauntingly premature. Would Southern Miss even bother to foul in a two-score game with less than nine seconds to go?

Of course they did, and they brought an Angel to the line. Rodriguez sank both his free throws, and when a last-second three by Southern Miss was unsuccessful, it gave Kansas State a six-point victory and those KSU -5 bettors an incredibly stressful one-point backdoor cover. And you probably didn’t even realize how exciting that game was until just now.

Jonah: I went 8-5, despite not betting any favorites with the money line. Unders worked well, as both of the games I bet to finish under the projected score paid off. When a no. 1 seed plays a no. 16, you get multiple factors potentially working in your favor. The no. 16 seed is likely to slow things down and limit the total number of possessions, giving them a better chance to spring an upset. A no. 1 seed with stifling defense like Syracuse’s might be so overwhelming for the no. 16 that they can’t find ways to score. And in a blowout, the no. 16 seed might start forcing bad shots, thus limiting their point total and resulting in an 81-42 score. Syracuse-UNC Asheville was by no means a blowout (Asheville very nearly won) but the other two principles applied, and I hit the Under with ease. The other Under that worked was Indiana-New Mexico State. Both those teams run very capable offenses, so this was strictly a bet against a very aggressive number: 155.5 total points. I wonder if bettors are sometimes more likely to bet the Over than the Under; if that’s the case, Under bets can offer potential value.

The rest of my bets were a mixed bag, some underdogs paying off against the spread, some getting blown out (I’m looking at you, West Virginia). Ditto for favorites, and Overs. There was one other category in which I was perfect for the day, though. When you’re with a big group of buddies and everyone is handing everyone else money to avoid the long betting lines, confusion can reign. Asheville covered its +9 first half line with ease, while Ohio State covered their own big spread. Turns out I’d said, “I want in,” just before others got to the betting window, both times. So based on a sample size of two, I can say definitively that the best March Madness bet you can make…is the one you don’t remember.

Bill: I was the one who bet that Asheville +9 first half figure alongside Jonah. I also had Asheville at +1400 to beat Syracuse outright, which you can imagine made all that referee chicanery very appealing!

Jonah’s friends did learn an important lesson, though: Always make sure you know what your number is. They combined to put down some money on Davidson +7 to cover against Louisville, and while that game also went through a variety of trials and tribulations during the final few minutes, a 69-62 Louisville win eventually meant that their Davidson bet was a push and would return their investment back to them without a profit.

Well, there was only one problem with their bet. Jonah was carrying their bet in his pocket and was away from the group for a bit, and when he came back, he pulled out the ticket to reveal an unfortunate finding: Their Davidson +7 bet was actually Davidson +6, turning their push (or tie) into a loss. Oops.

In the long run, though, they got their win back. As they were packing up to leave and cleaning out their rooms, one found a $100 bill on the floor. Since nobody could lay claim to the hundred bucks, it was decided that the most appropriate solution was to take the bill to the roulette table at the Cosmopolitan and split it across six numbers, with each member of the party choosing a number. Sure enough, one of their numbers (29) hit, producing a $576 payout and a $96 payout for each person. So as it turns out, it was everybody’s one hundred dollar bill.

As for the LVH, well, watching the tournament with friends in a cavernous room with enormous screens and cheap booze is something every sports fan should do once in their lifetime. I’m not always an enormous fan of sitting in the LVH’s actual sportsbook because it’s built primarily for horse bettors, which means a lot of smoke. (On the bright side for drinkers, it’s also one of the few remaining books in the city that doesn’t operate on the drink ticket system, so the waitresses will actually serve you booze if you’re sitting and watching games.) The theatre is non-smoking and generally a much more fun experience. If you find yourself in Vegas for a Sunday during the NFL season or for the opening four days of March Madness, I’d highly recommend the LVH theatre experience.