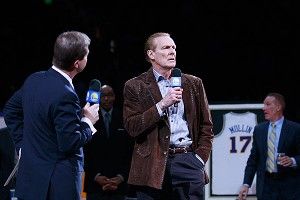 1. Rick Barry Angry Face
Dan Fierman was first to nominate this meme-worthy facial expression, then Bill Barnwell jumped in with this explanation: “I’m nominating Rick Barry for his role in trying to calm down the Warriors crowd during the Chris Mullin fiasco on Monday night, but specifically for his death glare in this photo. I saw this and I instantly started doing my homework, stopped asking my brother why he was hitting himself, apologized to everyone I’ve ever wronged, and broke up with every single one of his female descendants. Sorry, Mr. Barry!!!!!!”

2. Monta Ellis, You Stay Classy, San Diego
Given everything that happened in Golden State the other night, you almost wonder if he was maybe too classy for that place. Just check out his “Hello Milwaukee” statement. This guy!

4. Frank Tripucka, He Is Legend
Chuck Klosterman remembers a titan: “Frank Tripucka deserves some accolades for insisting he does not care if his no. 18 Broncos jersey is “unretired” for Peyton Manning. Of course, Frank only went 13-25-1 as a Bronco, so it’s not like he has an abundance of leverage. But the old man has grit. ‘A number is a number!,’ said the 84-year-old Tripucka, the first QB in Broncos history and the father of Notre Dame hoop legend Kelly Tripucka. I feel like they should give the old rascal something in return for this gesture. Maybe that freaky horse statue at the airport.”

5. The Prometheus trailer, Big Things Have Small Beginnings
Admittedly, if you put the Inception “bwong” sound on a film of two old dudes eating at Denny’s, it will seem like totally epic jams. But seriously, I haven’t been this hyped for a movie, based solely on its trailer, since Miami Vice. And we all remember how well that worked out.

7. Carmelo Anthony, The Underminer
I actually happen to like Carmelo a lot, but this is why some people don’t, and I find it pretty funny. This week, the New York Post ran a piece on how Mike Woodson goes ham on Melo in team film sessions. This information was deliciously followed by the Knicks forward saying, “After the film session, he’ll say, ‘Did you like that?’” If he has to ask permission, that kind of defeats the purpose of laying into you in the first place, doesn’t it?

8. Lehigh Mountain Hawks, Fuck Duke
Sarah Larimer believes in miracles: “Presented without comment. Well … except that one above.”

9. Fernando Torres, Go, Shorty, It’s Your Birthday
The Chelsea striker finally broke his scoring drought (daylong scoring drought) against Leicester City, helping the Blues to advance to the semifinals of the FA Cup. Torres put away two goals in the game. Then he got his picture taken cutting his birthday cake with his Chelsea and Spanish National Team teammate Juan Mata. Please keep in mind this man scored so many goals in such a little amount of time for Liverpool that I actually wondered whether the storm was named El Nino after him, rather than the other way around. Now he cuts his birthday cake looking like he’s Robert De Niro in Awakenings.

10. The Kentucky Wildcats, Go on to Victory!
One more feel-good hit of the summer from Sarah Larimer: “Every team or player I root for in this tournament has lost. The Missouri Tigers. Wichita State. Murray State. Robbie Hummel. (I also cheered for Kendall Marshall, so there’s that.) It. Is. The. Worst. So, from here on out, I’m throwing all my support behind the Kentucky Wildcats. God, wouldn’t it be some kind of something to see the no. 1 overall seed coast to victory in the tournament? March is truly a magical time in college basketball.”