Jalen Rose Predicts Michael Jordan Will Return for One Game 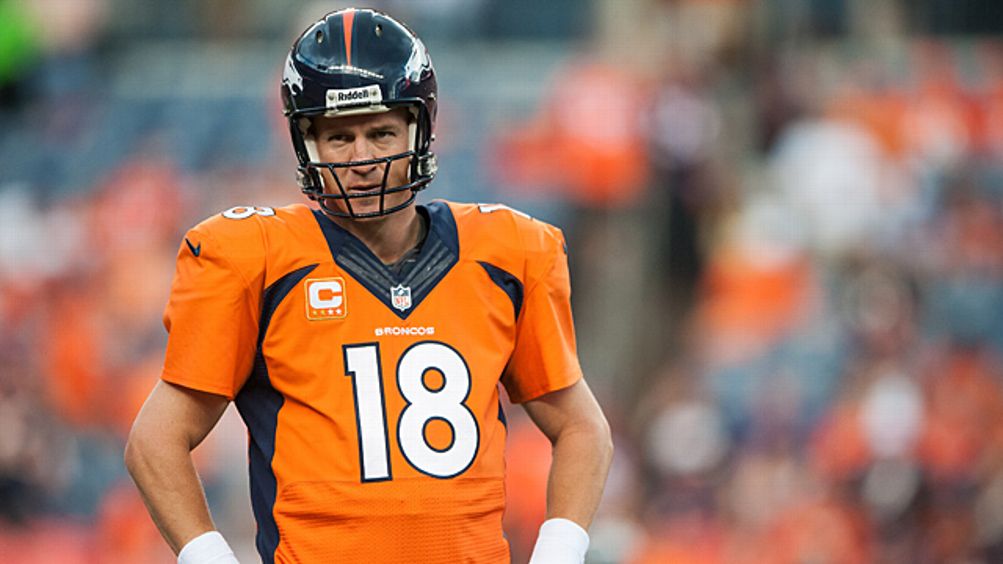 And yet … have you ever seen a football player less likely to crush, burn, or annihilate anything than Peyton Manning?2 It’s possible to imagine, say, Ben Roethlisberger, if a night took a weird swerve, actually wielding a torch in anger; Peyton Manning would spend that same night at home, in his sock-folding room, folding his socks. I doubt he has ever shredded anything in his life. (Maybe a document.) On the field, he’s Genghis Khan as portrayed by your 11th-grade trigonometry teacher. The language that best describes his accomplishments is also the language that most completely misrepresents his style.

It’s a cliché to note that he’s got some curious OCD tendencies — all that finger-licking under center,3 those rapid-fire Tourette’s bursts of audibles. What’s incredible is the cumulative effect 10,000 perfectly executed seven-yard reads have had over the years. At this stage in his late career, really for the whole season-plus he’s been with Denver, Manning makes being a midlevel IT manager look like a form of ruthless conquest. It’s as if he wrote a script to install automatic PC updates, and somehow it made him the god-emperor of hell.4 This is how he plays football: He goes out every week with a graphing calculator and a stack of forms, and he just audits teams to death.

George Orwell wrote that by the age of 50, everyone has the face he deserves. Manning is 37, well past 50 in football years, and his face increasingly looks like something that was squeezed from a tube of Crest. But watching him this past month, I couldn’t shake the feeling that his whole career has been pointing toward this moment — that somehow, this is the first time we’ve truly been able to see him. Which is strange to say, since, of course, he played in Indianapolis for over a decade, won four MVPs and a Super Bowl, broke half the passing records in the NFL, and will always be more associated with the Colts than with the Broncos. But still. Some athletes get old and become faded copies of themselves, diminished versions of what they once were. Think of David Beckham before he retired, or of Tiger Woods now, to name two athletes around his age. But Manning has become, if anything, an intensified version of himself. And not just because he’s playing next-level-even-for-him football right now — his whole temperament resonates in middle age in a way that it never did when he was 22. He doesn’t seem old, because he never seemed young in the first place.

Which is why, I’m sorry, I’ve never quite been able to buy his role in the romance of the Manning family. The Manning romance, to me, exists only between Archie and Eli, two essentially youthful improvisers who played for Ole Miss. With Peyton, I can’t quite see Archie as anything other than a solid professional contact who happened to teach him to walk during a series of early lunches. Go back and watch his Tennessee videos now and it’s disorienting how young he looks. Even some of his clips from the Colts years. It’s as if you’re being fed extraneous information. This partly explains why it hasn’t been as weird to see him in a Broncos uniform as it was to see, I don’t know, Joe Montana line up for the Chiefs. He doesn’t look reduced; he just looks like Peak Peyton Manning, drilling Wes Welker on quick out routes, as God intended. For this legendarily single-minded player,5 it’s as if youth were one more distraction he had learned to put aside.

And yes, you could make the case that all his tics and quirks and obsessive tendencies are signs of stunted growth, that he’s not so much an adult as a sort of productively thwarted child. But being a grown-up is not simply a matter of having mature priorities or a broad perspective. It can also mean living up to responsibility, being prepared. It can mean taking care of business, with all the dumb pressure that phrase implies. That’s Manning’s context, and if he has come to represent a certain kind of heroism, as I think he has, that’s the field on which it takes place. It’s a deeply square heroism, one whose negative you can see sketched in the list of mild pleasures that feature in his commercials — grilling, sweaters, Christmas parties, watches, sitting on the couch and looking at the TV. But so what?

Look at it this way: There’s a nervous disconnect between the way pop media portrays middle-aged white dads as bumbling dorks and the disproportionate share of American wealth and power that middle-aged white dads continue to enjoy. Manning quietly bridges this gap. He sends the reassuring signal that running the world is punishingly hard and that the world is nevertheless well run. That may be a lie, but on a Sunday afternoon it’s often a comforting one. He’s stressed out enough that you don’t quite want to be him, but benevolent enough that you’re glad he’s out there. He’s the sitcom doofus as culture hero. He is the Prometheus of dad rock.

What does it look like inside his head? I mean once you get down beneath the aw-shucks, yes-ma’am stuff and into the realm of perception and desire. If you like football, the question is terrifically compelling. Most great quarterbacks, even most immobile pocket passers, give the impression of riding on chance, of keeping their bearings as chaos breaks out around them. Peyton Manning gives the impression of choreographing chance. If the Broncos’ Ryan Clady–less offensive line hadn’t been somewhat porous, so that Manning occasionally got walloped by the pass rush after hurling yet another touchdown pass, his September would have looked almost staged. What does it feel like to play a complex sport so well that you seem to have mastered all its variables?

Partly I am fascinated by the problem of Manning’s inner life because he’s the precise opposite of the athletes I normally root for. I want madmen and poets and visionaries; he plays with no romance and no flair and with a degree of hyper-preparedness that seems to rule out inspiration. All those days spent watching game film, those hours contemplating seam routes!6 I’d like to believe that the compulsive pursuit of perfection puts him in contact with something we would find beautiful if we could see it, a plane of lunar understanding similar to how Roger Federer must see tennis — all the physics legible, all the angles converging. That his devotion to ascetic efficiency (that’s the word most often applied to his game, “efficient”), his winnowing down of everything superfluous, lets him simultaneously play football and see it from above. The depressing alternative is that his brain is simply a list of scenarios, a database of bubble screens and zone blitzes and drag routes that he can search as needed. As though there were nothing more to the game than its specifics; as though he’d spent his whole life becoming the instruction manual to some giant machine that no one else could find, much less operate.

I keep thinking about old astronauts. I mean the early-space-program guys, the 1960s-Apollo-program guys, the all-American nerds with rectangular haircuts. What a supremely weird group of normal people. You can get a quick sense of that from Apollo 13 if you’ve seen it, all those home-life scenes set in the America of cookie-cutter ranch houses and Radio Flyer wagons and Jell-O salads. Those guys were practicing weightlessness by day and then going home to drink a beer and mow the lawn and probably watch Archie Manning play football on TV. You think of transcendence in that era as coming strictly through the counterculture, but this was a group of straight-up Eisenhower-legacy Air Force vets literally working to leave the Earth. And their imaginations were on fire with it, as how could they not be, but day to day it was mostly a matter of technical detail — getting the math right, testing every last ball bearing in the engine. They were engineers, not poets, at least right up to the moment when they actually found themselves in space.

Maybe this is the way to think about Peyton Manning — that without challenging convention or wasting time thinking about aesthetics, he’s devoted to something in its own way extreme and spectacular; that he’s constantly testing ball bearings as a means of orchestrating his own weird escape. Isn’t there something a little science-fictiony about him? I can imagine him on the cover of some ’50s atomic-age pulp, Amazing Stories or Astounding Science Fiction. I can imagine him sitting in an office thinking about radio waves. I can imagine that what goes on inside his head is a terrible fear of dying in a fireball combined with a consuming longing to blast off.

All poetry can do, in the end, is make the world bearable. It’s engineering that gets you to the moon.