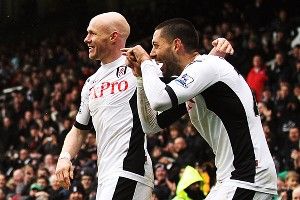 1. Clint Dempsey, Forza Nacogdoches
He kicks in your voice, American! Brian Phillips nominates the USMNT/Fulham titan. I second that nomination. And you third it. Dempsey scored the match-winning goal against Italy in Genoa last week, giving the national side its first-ever victory over the Azzurri.

Meanwhile, back in England, Deuce has been on a tear, scoring twice against Wolves last weekend. But here’s the best part …

2. Pavel Pogrebnyak, HE MUST BREAK YOU
Dempsey’s strike partner on the Cottagers is the recently acquired Pavel Pogrebnyak. This Russian was on a tough beat at Stuttgart earlier this year, but seems to have found his old Zenit St. Petersburg-era form in West London, scoring five goals in three games since joining Fulham.

And? And! Guess what the American Dempsey and Russian Pogrebnyak’s strike partnership is called: THE COLD WAR. Tinker, tailor, soldier, GOOOOOOAL!

“When not in use, Angry Rajon Rondo should be returned to its special container and kept under refrigeration. Failure to do so relieves the makers of Angry Rajon Rondo, Danny Ainge’s Very Public Idiotic Trade Ideas, and its parent company, The Boston Celtics, of any and all liability. Accept no substitutes!”

4. Deron Williams, G-O-I-N-G S-O-L-O
Remember the other week when D-Will won Rankonia by going ham on Jeremy Lin? Yeah. Forget having Deron start for Team USA in the Olympic Games this summer. After his 57-point night (albeit against the Bobcats), maybe we should just send him on his own.

5. Rob Jones, Redefining the Word “Lucky”
If there were a Rankonia for infamous family trees, this Saint Mary’s baller would be the undisputed champ. Take it away, Shane Ryan: “On Nov. 18, 1978, Rob Jones’s grandfather Jim was encouraging 900+ people to drink grape Flavor Aid laced with cyanide at the People’s Temple in Guyana. Luckily, Rob Jones’s dad was in Guyana’s capital city, Georgetown, playing in a basketball tournament against South American national teams (they lost every game). The team couldn’t get back to Jonestown in time for the mass suicide, and were among the few survivors of the whole ordeal. Now, 34 years later, Rob Jones is a West Coast Conference champion for the Saint Mary’s Gaels, and he’ll soon be playing in the NCAA tournament. That’s gotta be worth something, Chris!”

6. “Zaza Pachulia,” Sign and Signifier
Bill Barnwell presents this slang editorial: “OK, one final tidbit from Sloan. You may have seen Josh Smith’s ferocious dunk on Serge Ibaka from this past Saturday night.  What you might have missed, though, was Zaza Pachulia coming up from behind to give Smith a huge bear hug as he celebrated, a move that Smith appeared to ignore entirely.

“In that moment, it simultaneously occurred to me, Jonah Keri, Basketball Prospectus‘s Kevin Pelton, and Ball Don’t Lie‘s Dan Devine that ‘Pachulia’ is appropriate to exclaim in any context, at any time, for any reason. Go ahead and try it right now. Think about something awesome and just say ‘Pachulia.’ It works, huh? This is some ‘Thinking Fast and Slow’ stuff that we’re on here.”

7. Tim Tebow, America’s Most Eligible
David Jacoby wonders whether the Broncos QB’s rose-throwing motion is a little long: “He would be a terrible Bachelor. But in true Tebowian form, he would make up for it late at the reunion by pimp-slapping Chris Harrison, announcing he was tired of being a virgin, and sleeping with the entire cast on network television.”

8. Harvard, A Tradition Unlike Any Other
Backing away slowly from Sarah Larimer, clutching my JLIN T-shirt and my Blu-ray of The Social Network: “Going dancing! (For the first time since 1946!) Man, I really want to be pro-nerd here, but come on. It’s so hard to back the future 1 percent.”

9. Dusty Baker, Life Coach
Here’s the Cincy manager on third baseman Juan Francisco’s calf strain: “Part of that is he came into camp as one of the few guys overweight. The guys that came in ready, I can’t shelve them because he didn’t. I’m trying him ready the best I can. We need him.” A reporter then responded that Francisco was probably gaining weight because of his injury. To which Baker responded: “Then he’s got to stop eating.” Muerto.

10. Brett Favre, Good Sport
Not sure what it means to Bountygate or the outrage over said … gate, but Brett Favre certainly handled this whole business like a kid out there: “It’s football. I don’t think anything less of those guys. I would have loved to play with Vilma. Hell of a player. I’ve got a lot of respect for Gregg Williams. He’s a great coach. I’m not going to make a big deal about it. In all honesty, there’s a bounty of some kind on you on every play.”