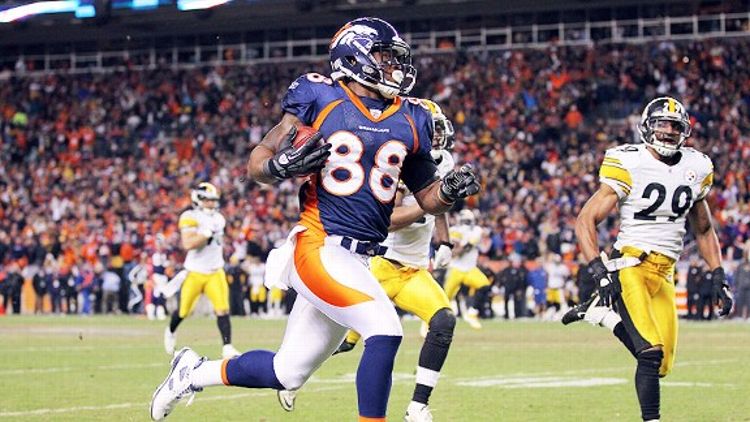 1. Lionel Messi, Best Athlete in the World
We dole out a lot of false praise in Rankonia. So understand that I’m saying this with the intensity of 1,000 Daniel Day-Lewises: Lionel Messi is the best athlete alive right now. Last season, he scored 51 goals for Barcelona and Argentina in the 2010-11 season. He’s already got 33 this season, taking his club tally to 211. Maybe you need a refresher course:

He’s helped Barcelona win La Liga the last three seasons, and the UEFA Champions League trophy twice in the last three years. Oh, and he just won his third straight Ballon d’Or award. Cristiano Ronaldo, the second-best player in the world, didn’t even bother going to the ceremony. That’s what kind of no-brainer it was. He can confidently be discussed in the same breath as Pele and Maradona. Many believe he might already be better.

2. Demaryius Thomas, Denver Broncos
Maybe not enough is being said about this guy? That was some textbook “catch and 80-yard-afterburner sprint past wheezing Steelers.” Just like they drew it up. Can you imagine if he had dropped that?!

5. Dustin Penner, Sippin’ on Some Syrup
Katie Baker is almost finished with her thesis, Scrapple on the Ice: A History of Breakfast-Related Hockey Injuries. So until that hits stores, savor the flavor of this tidbit about the Los Angeles Kings left winger, who Katie nominated for “THROWING OUT HIS BACK WHILE, IN HIS OWN WORDS, ‘LEAN[ING] OVER TO DIP INTO SOME DELICIOUS PANCAKES THAT MY WIFE MADE.’ ”

6. Wayne Rooney, Portrait in Resilience
Brian Phillips gives the Manchester United hitman the hair-dryer treatment: “For proving that he can pull off his by-now-trademark metamorphosis from wheezing, nicotine-stained, granny-shagging club pariah to multi-goal-scoring big-game superhero and back (and back … and back … and back!) in less time than it takes Sam Allardyce to digest a crate of Cheez-Its.”

7. Delonte West, Dallas Mavericks
As Rembert Browne and Amos Barshad point out, the White House is a Delonte-Free Zone for what is now 77,137 days, as the Mavericks guard did not accompany his (new) teammates to meet President Obama on Monday. West initially claimed this was due to his failing a background check. In his typically candid way, West addressed the matter: “That’s what happens when you make bad decisions in your life. You can’t go to the White House. … I’ve been there [the White House] 100 times in my lifetime. I live right around the corner. I live in D.C. It’s going to be a shame the president isn’t going to get a chance to meet me. I’m the president of my house.” In somewhat mysterious, kind of sad West-ian fashion, the Secret Service then disputed the suggestion that he was banned.

West has been a personal favorite of mine ever since he, along with Jameer Nelson, led a really fun St. Joe’s team to the Elite Eight back in the 2004 NCAA tournament (losing to a Tony Allen-led Oklahoma State). His battle with bipolar disorder has occasionally been a harrowing kind of public theater, but he’s someone I pull for, in part because of his sometimes abrasive, sometimes funny honesty.

8. Vincent Swope, Thousand-aire
A second nom from halftime entertainment scholar Sarah Larimer: “Loses points for being a Kentucky fan, but still defeated Evil Corporate Overlord Kroger. (With the help of the Internet, obvs.) The 99 percent rejoices!”

9. Jarrett Lee, Your Favorite Backup’s Favorite Backup
Was that the most passive-aggressive wearing of a helmet by a guy on the sideline in the history of organized football? I loved how, every time the camera cut to Lee, HE WAS STRETCHING. JUST IN CASE.

10. Josh Chapman, Leatherhead
You may not remember the name, but you surely saw him looking for his Tide helmet after many, many plays during Monday’s BCS National Championship Game. Seriously, did this Bama defensive lineman have a prop bet on how many times that thing would fly off? The chinstrap is not an ornament, dog!