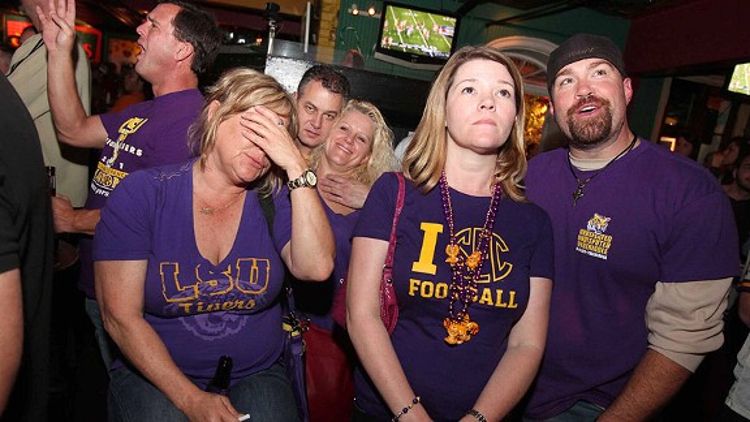 There were puddles on the ground in New Orleans on Tuesday morning and the clouds were hanging low. It must have rained at some point late in the night, sometime after Alabama’s 21-0 win over LSU in the BCS Championship game. I had spent the night battling toward sleep against a constant loop of “Sweet Home Alabama,” and the awful cadence of rammer-jammer-yella-hammer. It was still ringing in my head in the morning as I clutched my coffee mug and stared at the still water on my neighbor’s roof. It can be a disheartening thing when the world outside so closely mirrors the world inside. You may call it the pathetic fallacy, but we Southerners are romantics; it’s in our nature to mold the humidity in our own images.

It’s been years since someone beat LSU as badly as Alabama did Monday night. There was a 31-0 drubbing at the hands of the Tide in 2002. There was that awful night in 2005 against visiting Tennessee, a game that was pushed to Monday night owing to the weekend landfall of Hurricane Rita, which came only two weeks after Katrina; the Vols won that one, and planted the UT flag in the eye of the tiger at midfield. In 1993, the Tigers lost 58-3 at home to Steve Spurrier’s Florida team, on a night when even I, 8 years old at the time, knew we’d been outclassed. But last night was different. No other Tiger team in history managed to do what this season’s team did, not even the much-vaunted 1958 team that we all grew up hearing about. LSU blew out this year’s Rose and Orange Bowl champions. They defeated eight ranked opponents. The purple and gold were the consensus best team in the country; even the national championships in 2003 and 2007 were shaded by some controversy or other. We’ve always been a little cocky in Louisiana, but as we filed into the Superdome on Monday night, hawing at the Bama fans and wondering aloud whether we’d house the Tide the way we had that other team from Alabama, there was something different: We believed the things we were saying.

A strange thing happened Monday morning, several hours before kickoff. I ran into an old family friend on my way to the French Quarter. He was standing under the portico of his lavish hotel in a bright-yellow Honey Badger T-shirt and purple gym shorts, smoking a cigarillo and watching the crowds. Back in the ’90s, he got a hold of some police chalk. For a while, after every home win, he’d have his son lie down on the concrete while he drew an outline that would then be branded with the name of the defeated opponent. He’d been out all night Sunday, drinking in the bar of another, more ornate hotel and arguing with Bama fans. He didn’t seem to want to talk about that night’s game. “I’ll tell you what, though,” he said, twisting the moist end of his cigarillo between two fingers. “Tonight, when I get back to the hotel, I’m buying my ticket to Miami. Because next year is our year.”

Any rational thinker will tell you that he’s right. This LSU team is young and deep. Both quarterbacks Jordan Jefferson and Jarrett Lee have played their last games as Tigers, making way for big-time Juco transfer Zach Mettenberger and mega-recruit Gunner Kiel. But the season opens against North Texas, and Idaho and Towson will also come to town before September’s out. LSU might well run the table next year, and has as good a chance as anyone to win the national title, but there will be no blowouts over other conferences’ champions. If LSU does make it to Miami, there will be much complaining about the soft non-conference schedule. And we’ll return to the way we’ve always perceived the SEC and its eventual champion, no matter what the Tigers do in conference play. This year was our year.

I’m old enough now to know that weather patterns aren’t set by the mood of any particular city. Even so, in the quiet moments before I turned on my computer Tuesday morning, it was nice to see that I wasn’t the only one who thought that the night before needed to be washed away. Twelve months from now, if Tyrann Mathieu and Les Miles are posing with the crystal football, I will scream until I’m hoarse. But not this week. This week, the things that people are saying about my team are true, and I won’t disagree.