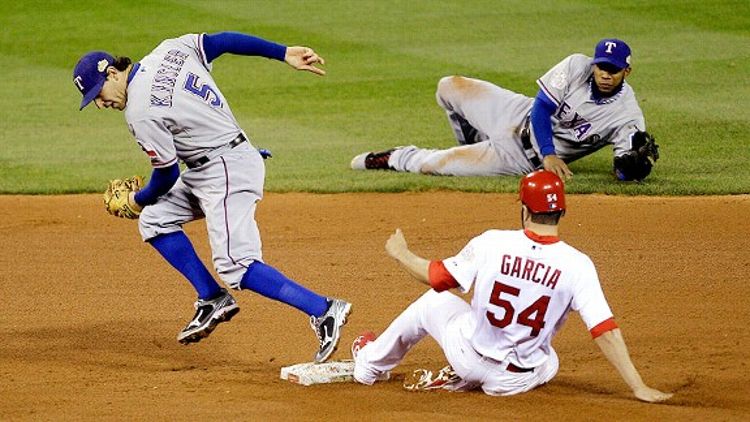 Of all the potential advantages in play for the Cardinals and Rangers during the World Series, three were most stark. Tony La Russa had made a career out of making wise in-game moves, especially with his bullpen, giving the Cardinals a big edge over Ron Washington and his track record of iffy decision-making. The two other clearest edges went to the Rangers, for their defense and baserunning.

When your ace chokes the life out of a lineup for nine innings or your star slugger destroys the opposing team’s will to live, little things don’t make much difference. But when games go down to the wire and the final outcome is decided by a single run, they can mean a lot. In Game 1, the Cardinals won the battle of managers. The Rangers stole a 2-1 Game 2 win on a pair of defensive gems, and a ninth inning full of baserunning derring-do.

For eight innings, the Rangers looked like they’d never score a run again, much less win a game. Jaime Garcia dominated Texas over seven innings, striking out seven and allowing just three singles and a walk. Though his fastball averages less than 90 mph, Garcia’s been highly effective in his two seasons in the Cardinals rotation, posting a slightly above-average strikeout rate and limiting homers by mixing four pitches effectively, and being willing to throw them in any count. He finessed the hell out of the Rangers last night, playing on their weaknesses.

In the second inning, Garcia got ahead of Michael Young by keeping the ball down, then changed planes by firing a letter-high fastball right by Texas’ miscast cleanup hitter. You could fill 100 highlight reels with shots of Adrian Beltre whiffing on breaking balls low and away … so Garcia took advantage, chucking a 76-mph curve on 0-2 that Beltre missed by a foot for the strikeout. In the fourth, the Rangers put two on with two outs, sending Beltre up again; Garcia fell behind 3-1, got Beltre to chase an ankle-high cutter for strike two, then threw another cutter for strike three. Throughout the LCS, pitchers tried to challenge Cruz with inside fastballs, only to see those pitches get crushed into the stratosphere; Garcia fell behind him 3-1 in the fifth, painted the outside corner with a changeup for strike two, then fanned the Rangers’ other impatient slugger on a curve in the dirt for yet another strikeout.

While Garcia carved through the heart of the Rangers’ order, the nos. 2 and 3 hitters again looked lost. Ian Kinsler continued to produce, reaching base two of his first three times up. There were no botched bunts or hit-and-runs this time, but Elvis Andrus couldn’t make anything happen by swinging away, either, re-raising the question of why Cruz and Mike Napoli are batting four and five spots below him, respectively. Andrus still has his uses (as we discovered later in the game), even if his lack of pop probably belongs in the seventh or eighth spot.

Josh Hamilton, on the other hand, shouldn’t be playing. Every time Hamilton steps to the plate, it’s painful to watch. His at-bat in the seventh was especially gruesome. First-pitch cutter, fouled off, Hamilton hops out of the box, trying not to put pressure on his injured groin. Second pitch, fastball right down the middle, the kind of pitch he usually kills … fouled off, followed by lots of wincing. Third pitch, 75-mph curve, swing and a miss, Hamilton using all arms and none of his lower body, wincing, then walking slowly back to the dugout. Though he’d contribute to the Rangers’ game-winning rally, Hamilton is clearly severely limited in every way at this point, his groin affecting his swing and his range — we can’t tell about his baserunning because he’s not coming close to getting on base. There might be huge backlash, both from the player and the media, if Ron Washington benched Hamilton. But it’s possible, even likely, that his replacements (David Murphy vs. lefties, Endy Chavez vs. righties) could better help the Rangers, whether with their bats or in other facets of the game.

The Cardinals finally broke through for a run in the bottom of the seventh, with Allen Craig driving in the go-ahead run for the second straight night, again against Alexi Ogando, again on a low-and-outside fastball that was again slapped to right for a huge RBI single. Had the score held up, Washington would have been grilled for making the same mistake in the same situation two nights in a row. But let’s save some credit for Craig, the kind of ace pinch-hitter you rarely see with today’s bloated bullpens. Had the Cardinals hung on to win, we’d have to start seriously considering whether a pinch-hitter could be a viable contender for World Series MVP. We’d also have to wonder why Michael Young would hold non-base-stealing threat David Freese so close to the base, fail to move at all to his right after the pitch was thrown to cover up the hole, then butcher Nick Punto’s one-hopper so badly that the inning even got to Craig in the first place. Actually we wouldn’t have to wonder: Young’s a lousy defensive player no matter where he plays, that’s about it.

Their first baseman’s butchery notwithstanding, the Rangers’ defense kept them in the game, with two plays by Andrus and Kinsler highlighting those efforts. In the fourth, with one out and a runner on first, Matt Holliday whacked a pitch up the middle, the ball looking like it would scoot into center for a hit. Instead, Andrus snared it, then while his momentum carried him onto the outfield grass, backhanded the ball to Kinsler, who bare-handed it and fired to first for the double play. Andrus fared even better in the fifth, pulling off the defensive highlight of the playoffs. With runners on first and second and two outs, Jon Jay ripped the ball up the middle. Andrus corralled it with a diving stop, propped himself up with his right hand, then flipped the ball from his glove to Kinsler, who arrived at second on a dead sprint just in time to catch the ball and retire Garcia. It was the stuff gifgasms are made of.

The Rangers finally cracked the scoreboard, and won the game, in the ninth. Kinsler reached for the third time, blooping a single to left-center that probably gets caught if the Cardinals weren’t playing a deep, prevent defense (I’d love to see a study on doubles-guarding defense, and if it’s as ineffective as prevent defense is in the NFL). That brought up Andrus. The safest way to move Kinsler to second at this point is to drop down a bunt. Sacrifices certainly aren’t foolproof, but Andrus is a competent bunter and someone who stands a good chance of putting the ball in play and getting the tying run to second. But the problem with sacrificing is that you’re trying to give up an out. The play with a much higher reward, if successful, is to send Kinsler, an 86 percent career base-stealer. Unlike Game 1, when Kinsler got a poor jump because he didn’t anticipate Andrus whiffing on a hit-and-run, he was primed to steal this time. Kinsler took off, Yadier Molina fired … and Kinsler just beat the tag, on a terrific slide to the back of the base. It was another good call by Washington, following his smart decision to use Colby Lewis in St. Louis (six and two-thirds innings, one run, four hits, two walks, four strikeouts) rather than subject his tateriffic starter to the horrors of Arlington.

Texas wasn’t done with its aggressive baserunning. Andrus impressively hung in against Jason Motte’s barrage of high-90s fastballs. Finally, on a 2-2 count, Andrus got a pitch down the middle and lined it to center for a base hit. The Rangers held Kinsler at third. But Andrus took a wide turn around first. When Albert Pujols muffed the relay, Andrus scampered for second, sliding in safely. Suddenly Texas had two runners in scoring position with nobody out.

Then something remarkable happened. Tony La Russa, King of Bullpen Manipulation, screwed the pooch. Motte’s blazing fastball figured to be a nightmare for the half-crippled Hamilton, setting up a good possibility of a much-needed strikeout. But La Russa elected to overmanage, bringing in the ancient lefty Arthur Rhodes instead. Suddenly, Hamilton had a chance to face a slop-thrower rather than try to catch up to fastballs he had little hope of touching. Rhodes threw a dead-straight, 81-mph off-speed pitch to start the at-bat, and Hamilton took perhaps his first good swing of the series, lashing a fly ball to right, plenty deep to score Kinsler and send Andrus to third. With three righty hitters due up and the game on the line, the obvious choice from here figured to be Octavio Dotel, a right-handed reliever with the highest strikeout rate in baseball history (minimum 800 innings) and a terror against righty hitters. Nope, Lance Lynn got the ball instead. Young was able to get some redemption for his terrible defensive play in the seventh and his mostly flaccid postseason hitting, rapping another sacrifice fly to put the Rangers on top.

When the stakes were highest, Washington got the better of La Russa, Texas finally got to show off its speed and smarts on the base paths, and the Rangers seized home-field advantage for the series. For the second straight night, the smallest moves made the biggest difference.