QB Curve: Cody Kessler and the Weird Reality of an Underrated USC Passer 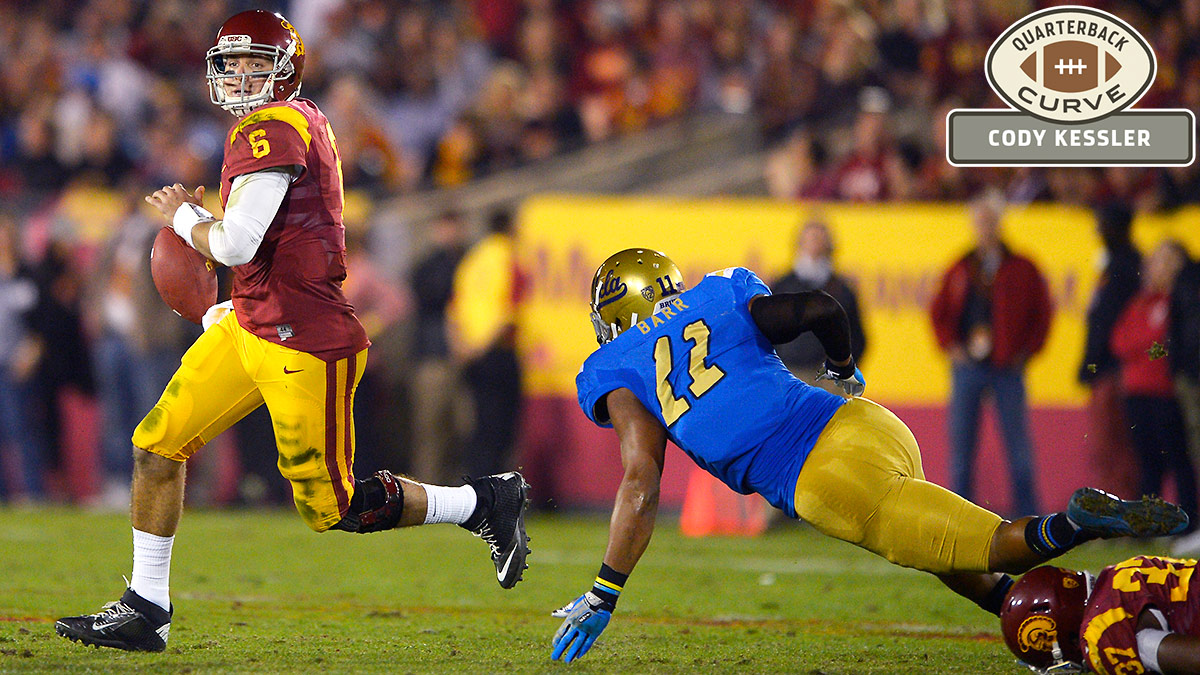 Typecasting — The Hidden Gem: Since the turn of the century, USC quarterbacks have tended to come in one model: tall, polished, and pro-style. For the ones who pan out, the world is their oyster: From 2002 to 2012, the position yielded two Heisman winners and six draft picks, effectively assuring that any passer good enough to earn a scholarship out of high school and remain on the depth chart will have a place waiting for him at the next level.1 In most seasons, the starting quarterback at USC is the odds-on favorite to be the most recognizable college football player in America.

Yet I wonder, in November 2014, how many people outside of Greater Los Angeles would be able to pick redshirt junior Cody Kessler out of a lineup. For that matter, what percentage of fans in, say, the Southeast or Midwest could even identify Kessler by name as the Trojans’ QB? For a guy with 24 career starts under his belt in such a high-profile role, he’s managed to cruise well below the national radar.

Frankly, that probably says more about the radar at the moment than it does about Kessler. As a recruit, he came through the pipeline in 2011 bearing the requisite four-star rating from scouts despite his lack of NFL-ready size, which, at 6-foot-1, 205 pounds, made him the runt of the litter compared to his statuesque predecessors. As a sophomore, though, he flourished following Lane Kiffin’s midstream ouster, turning in an efficiency rating of 151.6 over the final nine games of 2013; across the Pac-12, only Marcus Mariota produced a better rating (169.6) after the calendar turned to October. This year, Kessler has quietly entrenched himself among the most efficient passers in the nation, with an overall stat line that puts some of his more decorated antecedents to shame: 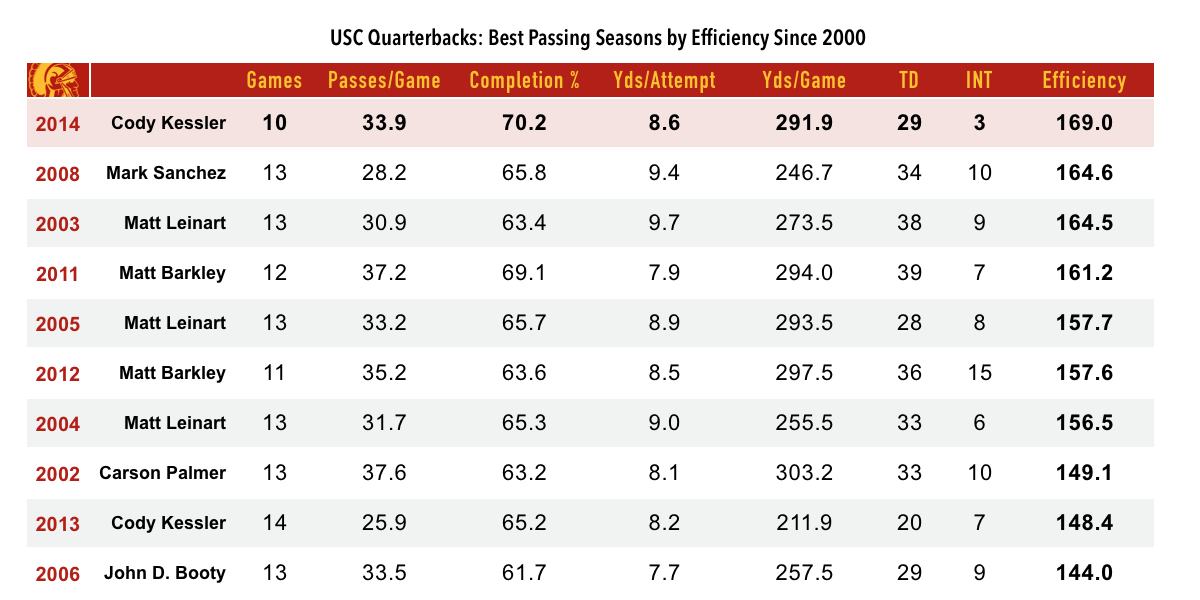 Look at some of the names below Kessler’s: Two Heisman winners (Palmer and Leinart), a third Heisman finalist (Barkley), and three first-round draft picks (Palmer, Leinart, and Sanchez), operating in essentially the same offensive scheme within the past dozen years. This isn’t like comparing a contemporary mediocrity who unloads 45 passes a game to an exalted Hall of Famer who missed more receivers back in the day than he hit.

Yet Kessler, occupant of arguably the most serially oversaturated position in college football in the past decade, is nowhere to be found on Heisman hype lists, even on the fringes; somehow, he didn’t even have enough of a national profile to make the cut of 16 semifinalists for the Davey O’Brien Award. Depending on how things shake out elsewhere in the division, this weekend’s crosstown collision with UCLA could determine the winner of the Pac-12 South, and will probably be Saturday’s most visible game in prime time. Still, for much of the viewing audience, it will be the first good look at Kessler all year.

I can’t believe I’m actually suggesting this, but is it possible we’ve reached a point at which the starting quarterback at USC is severely underrated? Or does a passing glance at the raw numbers actually tell us less than meets the eye?

At His Best: It’s hard to dispute the statistics on one point: When Kessler heats up, opposing secondaries go up in flames very, very quickly. In five different games this season, he’s exceeded 300 passing yards while dropping at least four touchdown passes, and the gaudy numbers on those occasions weren’t dictated by desperate circumstances; USC is 4-1 in those games, with the wins coming by an average margin of nearly 20 points. At times, the Trojans have flashed the kind of killer instinct that they used to be known for on a weekly basis, most recently en route to a 31-2 first-half lead against California.

Kessler was 31-of-42 passing against the Bears for 371 yards, four touchdowns, and a 174.7 efficiency rating, and even that gaudy figure was only a couple of points above his season average. In three other games (against Fresno State, Colorado, and Washington State) he’s posted a truly absurd rating of 190 or higher.

Still, even more impressive than the big plays may be the almost suspicious absence of bad plays. Kessler has managed to complete at least 62 percent of his passes in every game, for at least six yards per attempt. The closest he’s come to a killer turnover was a third-quarter interception at Utah that set up a go-ahead touchdown drive for the Utes, and Kessler responded to that by marching the Trojans 73 yards to retake the lead on the ensuing possession. (Utah went on to win that game on a decisive touchdown pass with eight seconds to play; in the same vein, note that Kessler was also watching from the sideline when Arizona State completed a game-winning Hail Mary as time expired in October.) His other two picks have come in USC wins, but regardless, if you’re still counting interceptions on one hand at this point in the season, you’re doing something right.

At His Worst: It’s hard to get worked up over an ostentatious stat line once it becomes clear how heavily skewed the numbers are from the bottom-feeding half of the schedule. At this point, Kessler’s numbers are so grossly inflated by facing lowly Fresno State, Oregon State, Colorado, Washington State, and Cal that it almost risks obscuring how ordinary he’s been against the competent opponents:2

It’s not exactly breaking news that quarterbacks tend to fare better against obviously outmanned opponents, but given USC’s raw talent and conference championship aspirations, that divide looks like a chasm. Against the bottom row on that chart, USC has averaged 42.7 points; against the top row, 24.0 points. Against the bottom row, Kessler has averaged better than four touchdown passes per game; against the top, less than one TD pass per game. To his credit, again, Kessler has avoided mistakes on both lines more deftly than any passer this season on the mortal side of Marcus Mariota. But to answer my own question from earlier, the glaring lack of big plays in the Trojans’ toughest games is the obvious explanation for Kessler’s failure to break into the national consciousness.

To Saturday and Beyond: There will be much more tangible rewards on the line against UCLA than “the national consciousness,” although the relative lack of competition for eyeballs in prime time3 means that Kessler will have the chance to impress an awful lot of people who haven’t seen him while also selflessly advancing his team’s interests in the division race. The Bruins have been solid enough against the pass, but they’re certainly not impenetrable, especially for a USC attack boasting arguably the best running back (Buck Allen) and best wide receiver (Nelson Agholor) in the conference.

On the other side, of course, UCLA has Brett Hundley, who might be considered the best quarterback in any other conference that didn’t also happen to include Mariota. If Kessler hopes to join the lineage of great Trojans passers not just on paper, but in the hearts and minds of USC fans, outdueling the guy who’s dealt USC two decisive defeats in a row is essential. 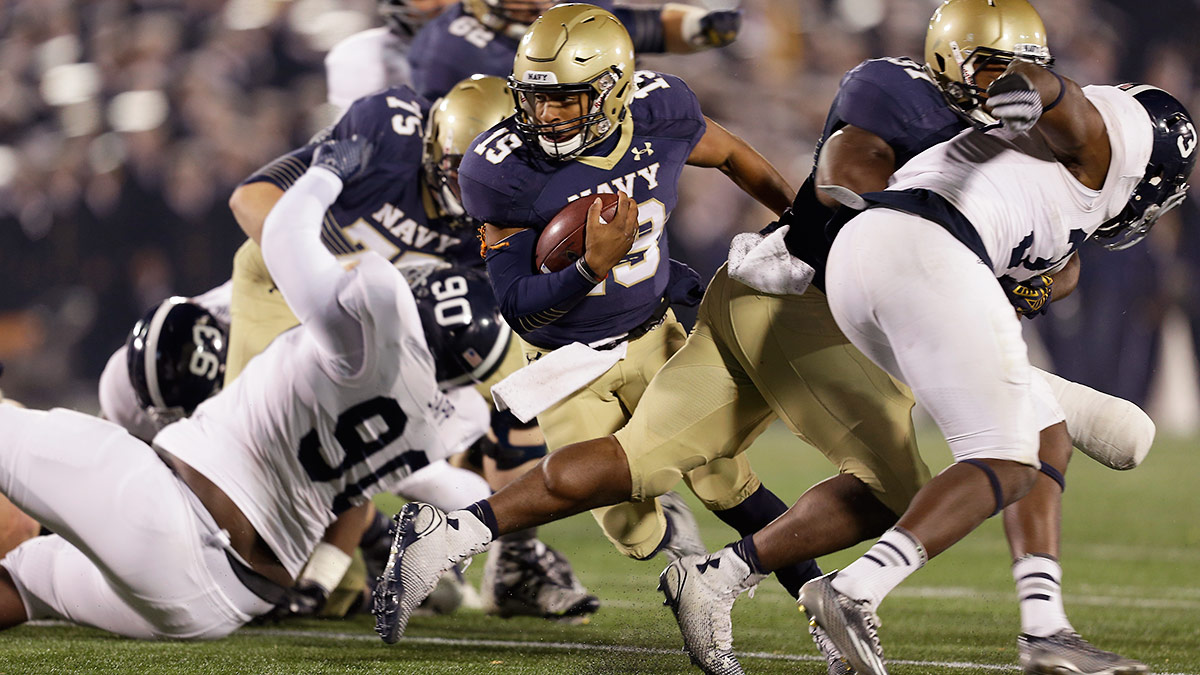 Navy’s triple-option attack has been so productive, for so long, that it’s easy to take the Midshipmen’s consistency for granted. But there was no way to overlook Reynolds’s production on Saturday, when he ran 30 times for a career-high 277 yards and an Academy-record six touchdowns in a 52-19 romp over fellow triple-option aficionado Georgia Southern. Reynolds was also 5-of-8 passing for 71 yards and another touchdown, and accounted for nearly three-fourths of Navy’s total offense. If the rules said the game had to go on until the opponent stopped him, like in baseball, the game would still be going.

On his way from 52 career rushing touchdowns to 58, Reynolds passed Tony Dorsett, Marshall Faulk, and Tim Tebow, among others, on the all-time list and pulled within 19 of Montee Ball’s FBS record. Given that Reynolds is only a junior with another season of eligibility in 2015, that mark should fall, oh, roughly one year from now. 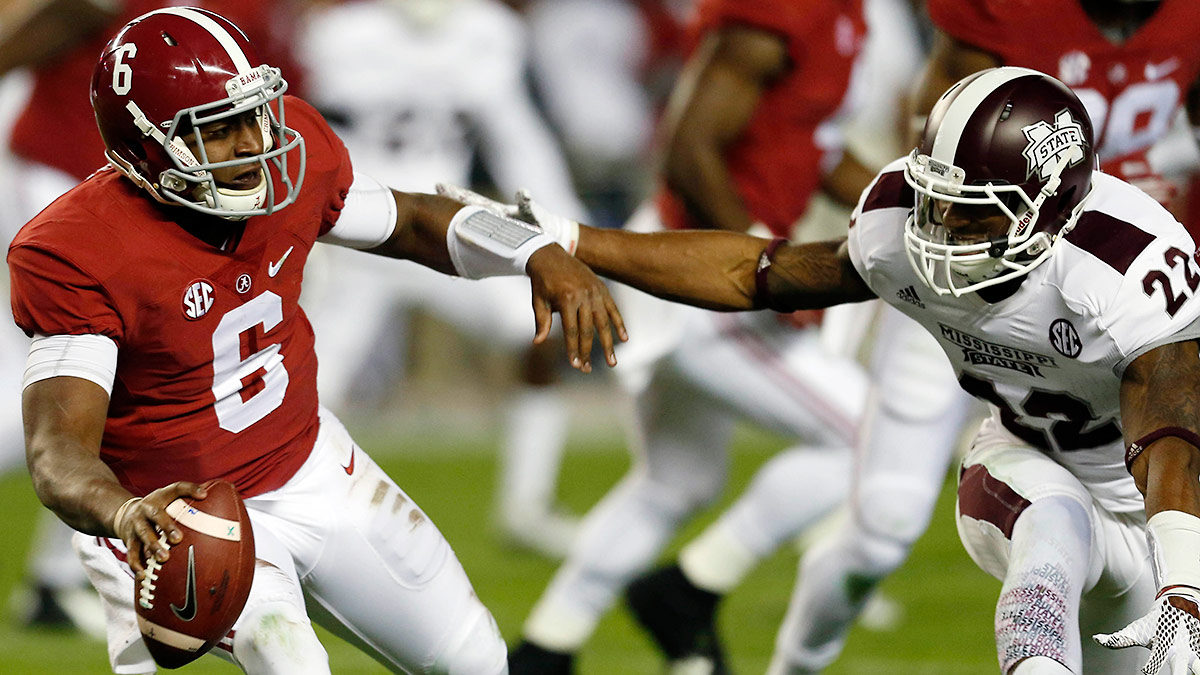 1. Marcus Mariota, Oregon. Mariota had the weekend off, and in a season like this one, he further distanced himself from the pack in the process. (Last week: 1)

2. Brett Hundley, UCLA. The Bruins also had the weekend off, but Hundley’s continued upward mobility is more of a reassessment of his season than a demotion for Dak Prescott: It’s hard to hold back the nation’s most efficient passer against opponents with winning records. (LW: 3)

3. Dak Prescott, Mississippi State. Prescott did throw three interceptions against Alabama, and also missed a couple of certain touchdown passes, but I still find it difficult to hold anything against a guy who accounted for 372 total yards in the most difficult possible environment. (LW: 2)

4. Jameis Winston, Florida State. Another week, another lethargic effort absolved by a fourth-quarter comeback. I’m still not sure this guy is beatable once that switch flips. (LW: 4)

5. J.T. Barrett, Ohio State. I added a little extra credit for Barrett’s 389-yard, four-touchdown performance at Minnesota because he’s from Texas. I live in Texas. Most people here would die if they had to spend four consecutive hours in the snow, or at least slip into some kind of cold-induced coma, and by that point they’d probably be glad to go. (I’d be one of the first to succumb.) But Barrett? He looked right at home. (LW: 7)

6. Bryce Petty, Baylor. Even on a bye week, Baylor came away with a de facto win courtesy of TCU’s near catastrophe at Kansas. (LW: 5)

7. Blake Sims, Alabama. Amid two otherwise unremarkable performances, Sims has taken the reins on a pair of clutch fourth-quarter drives to beat LSU and Mississippi State in consecutive weeks. People wondered how a former running back would fit into Alabama’s offense, but it turns out Sims is a Nick Saban quarterback all the way down to his bones. (LW: 8)

8. Nick Marshall, Auburn. Marshall endured the roughest night of his career in Auburn’s loss to Georgia, which was largely overlooked only because Todd Gurley’s night was worse. (LW: 6)

9. Trevone Boykin, TCU. Boykin is the most improved quarterback in the country relative to 2013, but in Heisman terms, I have a hard time believing anyone thinks he’s better than Amari Cooper. (LW: 9)

10. Cody Kessler, USC. The 2015 Cody Kessler bandwagon is gassed up, with the keys in the ignition, just waiting to kick into gear on Saturday night. (LW: NR)

Applying Some Baseball Rules to the Hockey Hall of Fame