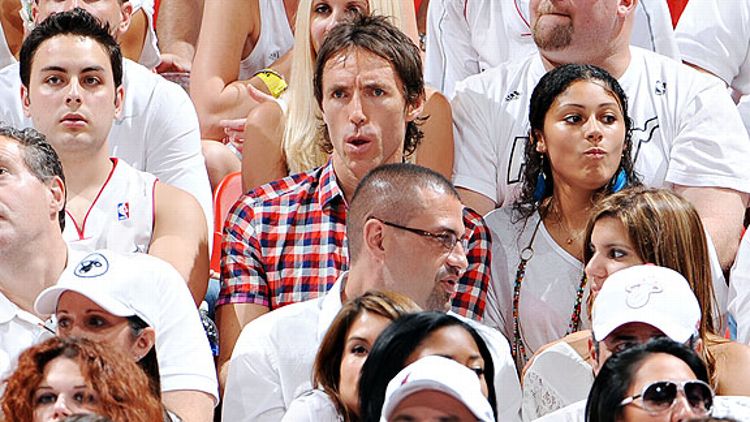 I think I speak for most of America when I say that my reactions to the Mavericks topping off the Heat and winning the Larry O’Brien trophy on Sunday night were as follows:

1. Next time I quickly and unceremoniously leave a place I am going to refer to it as pulling a Dirk. “This open bar just went cash. Let’s Dirk.”

2. In the future, when Birdman loses a $2 million bet, I want my reaction shots to linger a little longer. Feel your inner Terrence Malick, ABC director! Show me the tapestry of human emotion!

3. What is Steve Nash doing?

When Dirk Nowitzki puts on his 2011 Championship ring at Dallas’ first home game next season (whenever that actually happens), it will make Steve Nash the best active, veteran player without one. From 1998 to 2004, Nash and Nowitzki led Dallas’ charge against the dominance of San Antonio and Los Angeles, dazzling NBA fans and forging what would appear to be an incredibly close relationship in the process.

So while I’m sure Nash couldn’t have been happier for his pal, “The German,” (as he referred to him on Twitter), it must have been a night of mixed emotions. Without a move to a true contender, the chances of Nash getting a ring of his own are pretty slim. And as we saw on Sunday night, moving to a contender only makes you just that: a contender. Not a Champion.

I imagined Nash, sitting somewhere with a lukewarm Molson, licking his fingers and parting his hair as he went through these complex feelings. And then I realized, Steve Nash already is a champion. At life.

If you told me I could have the last six weeks of Steve Nash’s life and then you were going to throw me out of an airplane, I’d probably take it. Why? Because that airplane would be flying me back from some stop on a magical mystery tour of vacation paradises and major sporting events. When this guy hasn’t been watching the Stanley Cup Finals or the NBA playoffs, he’s been hanging out in bars, antagonizing Bruins fans or soaking up the sun in Jamaica.

Steve Nash is good. Steve Nash has a new girlfriend and a charity soccer tournament to tend to. Steve Nash probably cares more about the Canucks winning the Stanley Cup than he does anything right now. He’s not staring at his pale, accessory-free finger and wondering about what might be, what should be and whatever else.

Maybe it’s because we’re typically conditioned to believe that life needs mile markers; that diplomas make you educated or promotions make you good at a profession or marriage means you love someone. Maybe that’s why, regardless of the endless amounts of entertainment and pleasure and excitement we get out of sports and the athletes that play them, we demand that they too submit themselves to some kind of validation process.

On Sunday night, at his postgame press conference, LeBron James angered a fair amount of folks by throwing two verbal birds up at the people who have reveled in his failure to win a ring. “All the people that were rooting on me to fail, at the end of the day they have to wake up tomorrow and have the same life that they had before they woke up today… I’m going to continue to live the way I want to live and continue to do the things that I want to do with me and my family and be happy with that.”

Putting aside whatever Norma Rae issues you have with LeBron condescending to people who both hate him and their jobs, look at what he’s saying: “I want to live and continue to do the things that I want to do with me and my family and be happy with that.” Sure, he said it with a kind of punchy and bitter tone, but can anyone really take issue with the heart of what he’s saying? And can anyone blame him for finally snapping after a year of having his heart questioned, his motives second-guessed and his legacy prematurely cast into stone?

On Monday, the line of questioning continued, with Steve Kerr saying this to ESPNChicago: “If I were him I would spend all summer down on the low block shooting jump hooks and turnaround jump shots — the entire summer.”

Sound advice. But if I were LeBron, I’d spend my summer a little more like Steve Nash. It looks a lot better than a ring. And, besides, he could probably use a vacation.