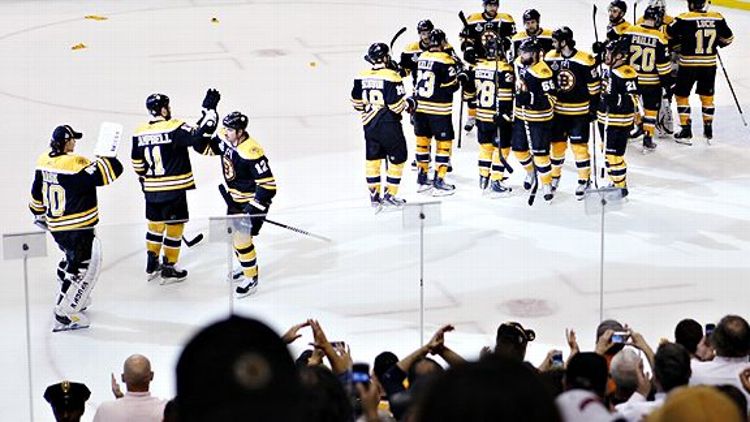 For the third time this series, the Bruins utterly dominated the Canucks at home — scoring four goals in the first half of the first period alone en route to a 5-2 win. As we prepare for what is arguably the most thrilling and unpredictable scenario in all of sports, a Game 7 in the Stanley Cup finals, here are the most important takeaways from Monday night’s rout.

1. SCORE EARLY AND OFTEN: This goes without saying, but after the game it’s also one of the few things to say. The Bruins effectively ended the game halfway through the first period, barely even giving their PA guy time to offer his trademark “Wooo!”s before they scored again. Boston’s four goals in just four minutes and 14 seconds shattered the 1956 Montreal Canadiens’ previous record of 5:29 and took Luongo out of the game with just five saves. (By the way: After sitting in TD Garden for 17 Bruins goals in three games, I now know precisely why Boston’s goal-celebration soundtrack was ranked as the worst in the Eastern Conference.

2. IF YOU’RE SCORED ON EARLY AND OFTEN, DON’T GIVE UP:The worst thing Vancouver did in this game wasn’t falling behind 4-0 early, but seeming to roll over and set their sights on Game 7 as soon as it did. The Canucks had several scoring chances in the second, but players fumbled open looks and pinged several pucks off the crossbar. Convert even one of those goals, they would have been looking at a far more competitive game late.

3. PHYSICALLY UNFIT: This has been a series defined by physical battles that range from the dirty to the disturbing, and Game 6 had both. Boston’s talented little terror Brad Marchand closed out the game by peppering Daniel Sedin with multiple unanswered gloved jabs to the face; asked why in the locker room, he said only: “I felt like it.” (Sorry, Vancouver fans, but I laughed.) Not funny whatsoever was what happened to the Canucks’ Mason Raymond, who crumpled to the ice after a collision with Johnny Boychuk and was serenaded with chants of “bullshit” by the Boston crowd. It wasn’t bullshit at all: Reports are saying Raymond sustained a vertebra compression fracture.

4. UNDERRATED CONTRIBUTIONS: Two relatively overlooked Bruins players have been crucial to Boston’s success. David Krejci has quietly led all NHLers in playoff scoring, amassing 12 goals and 11 assists this postseason. (He scored Boston’s fifth goal Monday night.) On defense, much attention has been focused on Zdeno Chara — not surprising, given his 6-foot-9 build and ferocious play — but Dennis Seidenberg has been one of the most imposing blueliners for the Bruins, and is one of the big reasons the Sedin twins have been held to just one goal apiece this series.

5. BE IT EVER SO HUMBLE: Home ice is always nice, but in a one-odd-bounce sport like hockey it’s often considered less of a big deal than in, say, the NBA. This series, though, has demonstrated the power of a friendly arena. The Bruins in particular have been a force when inside their barn, outscoring Vancouver 17-3 in the three games played at the TD Garden. But don’t forget the way the Canucks bounced back at home in Game 5 after being shellacked twice in Boston. Something tells me Luongo won’t get quite so much privacy on his seaside stroll this time.

6. DON’T TEMPT THE HOCKEY GODS: OK, this one isn’t entirely fair. Roberto Luongo’s comments about the game-winning goal that Tim Thomas gave up in Game 5 were blown entirely out of proportion by the media. Luongo wasn’t being an ass, he was making a wonky point about the differences in technique between him and the more freely-roaming Boston goalie. Still: If you’re going to become the arbiter of what is and is not an “easy save,” it might help if you could make a few of your own.

Dear Hockey Idiot: Here Are Answers to All Your Questions About Game 7. You're Welcome.