Dear Hockey Idiot: Here Are Answers to All Your Questions About Game 7. You’re Welcome. 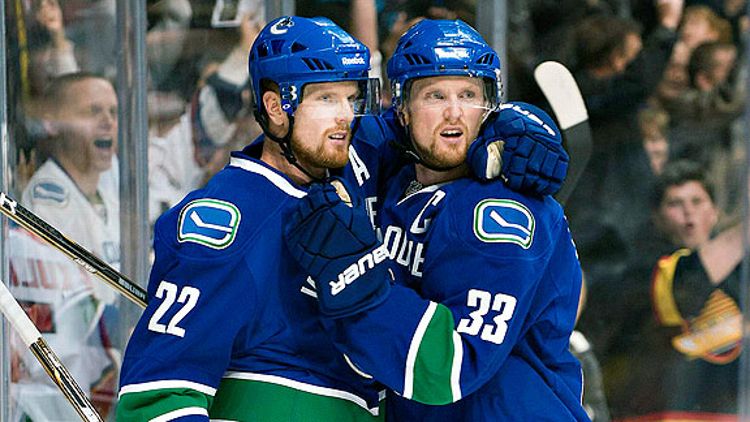 Quick. I’m a basketball fan who watches SportsCenter in my spare time so I haven’t seen a hockey highlight in nearly a decade. Why should I watch tonight’s game?

Boss, is that you? The Vancouver Canucks and Boston Bruins have been locked into one of the most soap-operatic Stanley Cup finals series for two weeks now. There have been brutal injuries, gorgeous goals, ugly hits, public sniping, and nail-biter games followed by blowouts. Both teams feature finalists for the league’s Vezina Trophy, awarded to the most valuable goalie of the regular season. On a darker note, both teams have seen a player go down in terrifying fashion &#8212; Boston’s Nathan Horton was concussed in Game 3, while the Canucks’ Mason Raymond fractured his back on Monday night. The home team has won every game, which has been the series’ only constant — the rest has been an absolute roller coaster. Really, it’s only fitting that it has all come down to Game 7.

Who is going to win?

It’s basically impossible to say, which is truly the best part of all. Boston’s home victories were all decisive — the Bruins won 8-1, 4-0, and 5-2 — while Vancouver’s wins at Rogers Arena have been by the slimmest of margins: 1-0, 3-2 (OT), and 1-0. If it’s that close tonight, in a Stanley Cup finals Game 7 with two goalies capable of both making or breaking the game, there’s no telling what could occur. Regardless of who wins, though, there’s a good chance the city of Vancouver will go up in flames tonight, the way it almost did in 1994. (Remember, when the game ends it will only be, like, 8 p.m. there.) And if you just can’t wait to see the game, though, you can always read this 100% accurate report from the future.

So if the home team has won every game this series, the odds must be in Vancouver’s favor?

Well, yes and no. Road teams are 3-12 in Stanley Cup Game 7s, which doesn’t bode well for Boston. But a win by Vancouver would also be historically stunning when measured by goal differential throughout the playoffs. Going into tonight the Canucks have been outscored by minus-4 goals in the postseason. Since 1986-87, the first year the league went to four best-of-seven series, the next-lowest goal differential is not only positive — it’s a plus-13.

Enough with these stats. I want to know how NBC is planning to make me cry!

They could easily fill the entire broadcast with nothing but a bruising timeline of the physical and psychological warfare that has transpired over the past few weeks, but knowing NBC, it will seek to play up some of the feel-goodsier tales just for you.

On Vancouver’s side you’ll hear about Manny Malhotra, whose season and possibly entire career was in doubt after he took a puck to the eye in March — I wouldn’t recommend Google imaging — but who made a surprising and emotional post-surgery return during Game 2 of the finals. He’s also married to Steve Nash’s sister, which is nice.

Nice! What’s the over/under for the cameras showing Steve Nash?

9½, and he’ll be waving a rally towel in all of them. Definitely three times as much as they’ll show the Green Men.

And which Bruin will be shamelessly fawned over?

Tim Thomas, the 37-year-old goalie who spent nearly 10 years toiling in various minor and European leagues before making it to the NHL, and who as recently as last year was banished to the bench. He’ll likely win the Vezina trophy for best regular-season goaltender, and there’s an excellent chance that, win or lose, he’ll go home with the Conn Smythe trophy for MVP of the whole playoffs. (If he did, he’d be only the second American other than Brian Leetch to win the award.)

Fans and the media love Thomas for his affable quirkiness and make-you-gasp play. He’s always reminded me of a camp counselor: in great shape, approachable but a little bit distant, bearded, hangs by the pool on his off days, pauses and looks off into the middle distance before speaking, went to the University of Vermont.

Yeah, but that’s nothing: Boston’s Mark Recchi is 43. When he scored in Game 3 he became the oldest player ever to score a goal in the Stanley Cup finals, leapfrogging … himself, from when he had scored another goal earlier in that game. He’s not that exciting, though, because he’s already won two Stanley Cups.

Settle down. “The Sedin Sisters” is just a derogatory name. Vancouver’s Henrik and Daniel Sedin are two of the leagues’ top players. (During the regular season they were so preternaturally precise that highlights of their power plays were set to the Harlem Globetrotters theme song.) But they’ve been held to two goals against Boston, which has caused them to become a target for the media, fans, and, literally, to players. This is not a new phenomenon: In 2002 Vancouver’s then-GM Brian Burke famously ranted that “Sedin is not Swedish for punch me or headlock me in a scrum.”

Which other players should I watch?

For Boston, the cameras love the young guys such as Tyler Seguin and Brad Marchand. Expect constant reminders that Zdeno Chara is 6-foot-9 and that Milan Lucic is from British Columbia. As for Vancouver, it’s a toss-up whether skilled and despised (skilledespised?) agitators such as Alexandre Burrows and Maxim Lapierre will be featured or swept under the rug, though their valuable play is likely to earn them some mentions.

But expect a world of attention on Vancouver goalie Roberto Luongo, one of hockey’s most sympathetic if polarizing figures. He was in net for Canada’s gold medal victory over the U.S. in the Olympics, yet he’s still distrusted by so many Canucks fans after a string of sad playoff performances over the years. In this series he has been his usual hard-to-parse self: He has been pulled from the net twice, but he has also recorded two shutouts. He’s also the perfect foil to Thomas, as Greg Wyshynski brilliantly explains.

OK, let’s be honest: During most sporting events, I like to spend a notable portion of my time on Twitter making fun of the announcers and studio guys. But I don’t recognize any of these hockey people, except for Dan Patrick. What do I need to know?

I’m going to assume you’re American. The NBC in-game team of Mike (“Doc”) Emrick and Eddie Olczyk is an inspired pairing, considering Emrick employs thousands of synonyms for words like “shot” or “bounced” during the course of a game, while Olczyk describes things in simpler terms like “tremendously tremendous.” That little man standing uncomfortably in what looks like a penalty box is Pierre McGuire.

Mike Milbury is pretty much the Isiah Thomas of hockey. This is the actual cover of Keith Jones’ book. (Fun game: During intermissions, watch Jonesy when he’s not speaking. He looks like a Labrador puppy straining to obey.) As for Dan Patrick: Don’t worry, he’s as confused about everything as you are.

Does anyone even watch hockey these days?

Yes, and I think even more people will over the next few years. It is estimated that between the U.S. and Canada more than 12 million people watched Game 6. (That doesn’t include the French-Canadian networks.)

And earlier this season NBC signed a 10-year deal with the league, meaning you can expect a huge uptick in coverage going forward. And with NBA and NFL lockouts looming, now’s the time to get involved!

Really, though, it boils down to this: If you’re not sure why you should watch a Stanley Cup finals Game 7 tonight over, like, Coyote Ugly on ABC Family, maybe it’s better that you don’t.