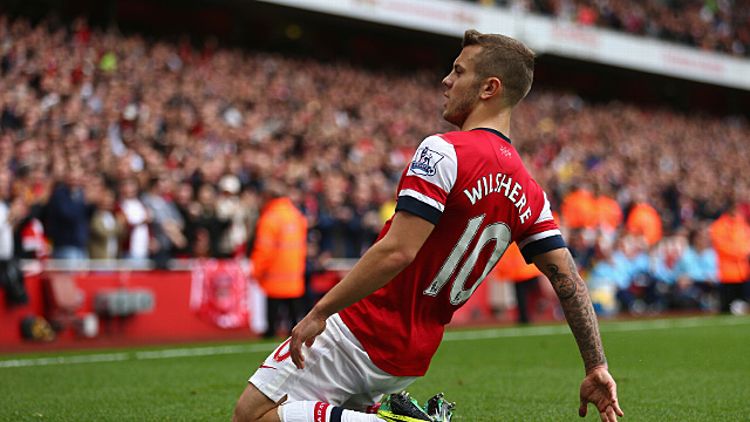 Goal of the Year

Chris Ryan: This was a hymn to football. I tried to do that little hop step that Jack Wilshere does in the very beginning of this goal in my living room and I broke a vase. It’s OK, I have hundreds of vases. Anyway, on Saturday, when this happened, our own Mike Goodman said this:

Just saw the Arsenal goal. Feels like that build up has been 8 years in the making.

I see what he’s getting at. This goal, Arsenal’s first of four against Norwich on Saturday, can be seen as the culmination of Arsene Wenger’s post-Invincibles rebuild of the club, and the end product of what now looks like an extraordinary triage job done after the departures of Cesc Fabregas and Robin van Persie (who were supposed to be the cornerstones of that post-Invincibles side).

It’s a goal from a team that was playing, at the time, four creative midfielders at once — Mikel Arteta, Jack Wilshere, Mesut Özil, and Santi Cazorla. You’re not supposed to be able to do that. There are too many problems with width, with protecting against the counter, with getting shoved off the ball and losing possession. When Mathieu Flamini suffered a concussion in the first half, the midfielder whom Wenger brought on to replace him, Aaron Ramsey, was maybe the most attacking of them all. It was like they were playing with a team of Xavi’s. That doesn’t just happen. Who does what? Who is the holding player? Who are the outside mids or wingers? Who is playing off Giroud? What are the roles?

Turns out it doesn’t matter. This was Wilshere’s goal and he deserves it — for trotting the ball up the field for 15 yards, dumping it off to Kieran Gibbs, and then keeping with his slow run up toward goal, where he was rewarded by Giroud. But it could have been any one of them. Turns out when you can do this …

… you don’t really need positions. You don’t even need to watch the goal. You can just listen to the Arsenal crowd (make sure you check it out past 1:00, when the Emirates fans see the replay at the stadium).

We saw hints of this happening last season …

… but they didn’t have the Welsh Zidane going all guns back then:

Arsenal might have a hard time playing fantasy football against teams like Liverpool and Southampton in the coming weeks. Hard pressing doesn’t allow for a lot of languid dribbling, Cruyff turns, and backheels. Key players like Ramsey and Özil could suffer injuries, and teams might figure out a way to expose the lack of defensive-minded players in midfield. We’ll see when they play Dortmund in the Champions League how it looks when an opposing club tries to run the Gunners off the field. But for right now we have this goal, this game, to savor. We are seeing a half-dozen football players who know exactly where the others are, at any given time, on a football field, and they are out-passing everyone in front of them. Arsenal haven’t won anything in quite a while, but when you see football like that, you start to wonder whether that really matters.

There is a third, albeit unwritten, rule: Jose Mourinho DGAF.

Remember when Chelsea were fun to watch — even likable? Neither do I. While the Mourinho transition isn’t complete just yet — Brendan Rogers still has both of his eyes and Juan Mata hasn’t retired to become a Spanish-to-English travel agent — Chelsea is now officially a Mourinho team again. For all the tactical brilliance and Tony Robbins–level inspiration, the defining Mourinho characteristic has always been his willingness to do whatever it takes to win. Often blessed with lavishly, if not offensively, talented squads, he’s turned all the teams he’s managed into pragmatic, angry machines that win games through blunt force and unyielding organization. Jose Mourinho looks at the Mona Lisa and he sees a really expensive place mat that he could beat you over the head with if the situation called for it.

After a brief flirtation with fun (winning the Champions League as an underdog; the Mata-Oscar-Hazard trio last year), Chelsea are now the team that uses Samuel Eto’o to kick a ball from a goalie’s hands so they can win by three goals against Cardiff. They’re also the team whose manager gets ejected and then sits in the stands, within spitting distance of the bench. Chelsea is still a must-watch, not because of how they play the sport, but because of all the other things that might happen along the way. Will Fernando Torres dye his hair black and start wearing obsidian nail polish? Might Branislav Ivanovic actually eat an entire soccer ball midmatch? Does Demba Ba have to try to play an entire game using only his hands if he wants to unseat Eto’o? I honestly do not know. But there’s another rule: If you give up fewer goals than the team you’re playing, you always win. As long as that keeps happening, the Mourinho madness isn’t going away.

Hard not to love that Oscar kid.

If David Silva Played for Arsenal, There Would Be Peace on Earth

Mike L. Goodman: Given all of the recent attention paid to Andros Townsend, it seems incredible that it wasn’t until this weekend that he scored his first goal for Tottenham Hotspur. And the way he did it couldn’t be any more perfect. He was trying to cross it.

See, the thing about Andros is that, to put it charitably, he’s not the most selective of shooters.

His 31 shots on goal tie him with Olivier Giroud for the most in the Premier League. But where Giroud shoots from an average of 15 yards away, Townsend launches from 27.6 yards (all of the great info courtesy of ESPN Stats & Info as always). In fact, you’d be hard-pressed to find anybody in the league who comes close to shooting as consistently, from as far away, as Townsend does. Looking at the most prolific shooters in the league, you get all the way down to Yohan Cabaye, tied for 20th with 17th shots, to find a player who shoots from farther out on average at 29.3 yards. But, after his own screamer this weekend …

… Cabaye has twice as many goals to show for his efforts as Townsend. After that, it’s all the way down to Charlie Adam in 42nd and his 13 shots and a goal from an average of 31.7 yards. This is simply not a club you want to be a part of.

And it’s not like Townsend’s proclivity for launching hopeful bombs is a unique result of his role for Spurs either. During his two starts for England during the international break, he launched seven shots from an average of 27.1 yards away, and last year on loan at lowly QPR he launched 35 times from an absurd 30.6 yards. This is eye-catching stuff, sure. But these shots rarely go in the back of the net. Even vaunted distance specialist Gareth Bale, whom Townsend is in some ways replacing, managed to shoot from four yards closer averaging a still quite distant 23.1 yards last season.

Townsend’s shot selection is terrible, which is a shame because he’s clearly electric on the ball. He leads the league in both take-ons attempted and completed with 38 and 62 respectively. That success rate of 61.3 percent puts him a solid fifth among the 20 players who’ve tried to dribble by their opponents the most. He creates chances at a perfectly respectable (if not particularly inspiring) rate of 1.8 per 90 minutes, tying him for 12th in the league (of players with at least 500 minutes). And on a Spurs team that at times still seems to be out of sync offensively, he has quickly become a player they rely upon to bring some creative attacking spark.

All of which is to say that Andros Townsend is an incredibly talented young attacking winger who desperately needs to learn a whole heck of a lot about shot selection. So when he did decide to cross the ball on Sunday, it was nice to see the universe reward him with a goal. Hopefully a little positive reinforcement goes a long way.

In Honor of the Retiring Jim Leyland, Here Is a Video of Him Cursing Out Barry Bonds

The Utah Plan: What Derrick Favors's Extension Means for the Jazz