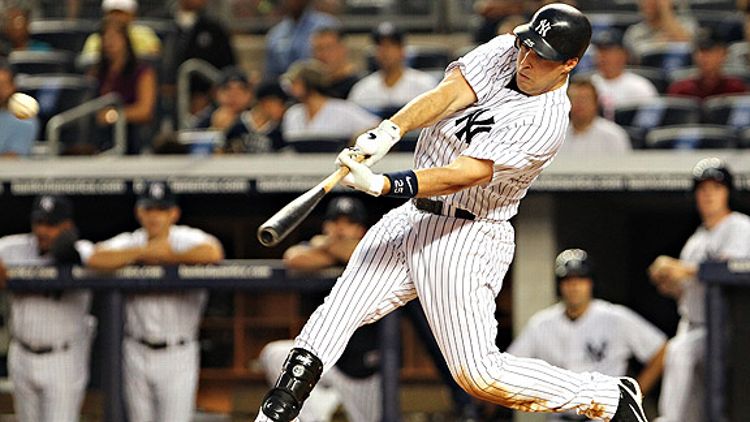 With playoff baseball officially underway, the time has come for Yankee fans everywhere to accuse their players of choking in the clutch. Let’s call it the A-Rod Phenomenon, since he was the poster boy for our ire prior to his breakout performance in 2009. This year, I’d like to be at the vanguard of the movement. With that in mind, here are three Yankees with shady pasts and a lot to prove in the 2011 postseason campaign.

In the Angels’ 2008 ALDS loss to Boston, Teixeira went 7-15 with 4 walks and 4 runs. Pretty solid stuff, except for the fact that all seven hits were singles. Then he came to the Yankees, and it’s been a two-year disaster. Behold the awful numbers:

He had exactly one signature moment, an extra-innings walk-off home run against Minnesota in Game 2 of the 2009 ALDS. I was there, about twenty rows back in left field, and the atmosphere was every bit as insane as this video implies. Aside from that moment, though, he’s come up empty again and again. It got to the point last year that when he went down with an injury against Texas, it actually felt like a positive development for the team.

The main theory behind his struggle seems to be that his long, looping power swing is effective over the long run against mediocre and below-average pitchers, but is exploited against the elite arms the Yankees typically face in the playoffs. Then again, it’s nearly impossible to know what combination of mechanics and mental blocks are responsible. Unless, of course, your name is:

It was another solid year for Cano, who finished batting .302 and amassed 118 RBI. But it was also another year in which his fatal flaw went unresolved — the man will swing at anything.

He swings at 42% (nearly half!) of all pitches outside the strike zone. That’s the seventh-highest rate in baseball, and twice as high as selective teammates like Nick Swisher (21.2 percent). And because he’s such a good hitter, he tragically connects on 75.8 percent of those pitches. More often than not, the connection is a weak grounder to second base. Cano’s natural ability lets him succeed despite this flaw in the regular season, though you can see the negative effect in figures like his on-base percentage, which, at .349, is lower than players whose batting averages are fifty points worse.

And in the postseason, the lack of selective hitting kills him. His .248/.296/.461 career playoff line is way too low for a player of his ability, but it’s predictable when you consider that opposing pitchers know exactly how to handle him: keep it low, keep it away, make him chase. The book is out, and Cano’s approach won’t cut it against the cream of the crop.

In the regular season, pitchers throw him strikes just 41.6 percent of the time (lowest of all major league middle infielders), and yet he swings at the seventh-most pitches (55.7 percent). In other words, he sees nothing but balls, but swings more than anyone else anyway. Mind-boggling. As for that strike percentage, expect it to go down in the playoffs. If you want a laugh, look at how the number has steadily declined year-by-year from 57% in 2005, his rookie season. There’s no need to challenge Cano when he’s fully capable of beating himself.

Of the three players on this list, I’m the most willing to attribute Swisher’s struggles in the playoffs to behavior. I could never prove it, but I seriously doubt his hyperactive personality helps him in moments of extreme pressure. And it’s more difficult to explain his decline in terms of mechanics. Unlike Teixeira, his swing is relatively compact. Unlike Cano, he’s extremely, extremely selective. But his playoff numbers as a Yankee are miserable:

In ten games earlier in his career with Oakland and Chicago, he wasn’t much better, batting just .208. But if I’m right that his decline is the result of personality rather than technique, the good news is that Swisher is the most likely of these three Yankees to turn it around in 2011.

And even if all three continue to struggle, and the Yankees suffer another early playoff exit, we’ll always have this wonderful video my cousin Justin sent me of the Red Sox collapse, set to “Wake Me Up When September Ends” and, hilariously, “Sweet Caroline.”