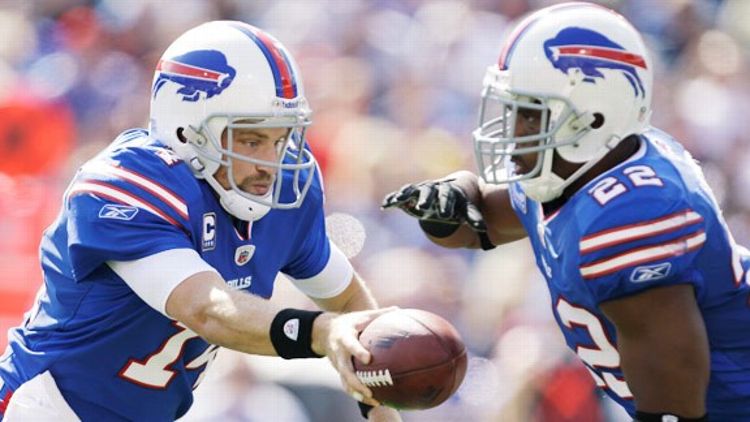 Lions (+1.5) over COWBOYS
The Detroit Sports Renaissance continues!!!!! Within a few days, we could have a 4-0 Lions team, a Tigers team in the ALCS, the Red Wings playing again and an NBA lockout partially being solved by the addition of an amnesty clause that would allow Joe Dumars to waive one of his 19 worst contracts. Somebody tell Eminem we need a new “Here comes Detroit!’ commercial. We’re ready.

Bills (-3.5) over BENGALS
Seems like a Trap Game for the Bills … until you remember that Cincy hasn’t beaten Buffalo in 23 years, Cincy’s stadium will be half-full at best (like Miami, they have a home-field disadvantage), it’s a possible Revenge Game II for Former Harvard Quarterback Ryan Fitzpatrick, and the Bengals are dealing with distractions like “Benson Will Play Despite Looming Suspension” and “Simpson Mum About Pot Probe.” (Note: I didn’t make those headlines up like Fox Sports does; those were real headlines.) Don’t you want to live in a world where the Bills and Lions are 4-0? I know I do.

Panthers (+6) over BEARS
Value pick: Carolina’s a little better than you think, Chicago’s a little worse than you think (it can’t block). I still can’t get over Chicago’s ingenuous punt return that got called back last week (or that they didn’t save it for a game they could actually win). Wasn’t that one of the great random plays in sports history? My three favorite parts: Johnny Knox’s catching the punt over his head like Willie Mays in the ’54 World Series, Devin Hester’s taking off and nearly catching Knox while running diagonally across the field, and Joe Buck’s refusing to crack his voice by even one decibel. This should be a new game show: “What Would It Take for Joe Buck to Raise His Voice During a Sporting Event?” When the Bruins went into the MSG stands in 1979 … would he have raised his voice for that? What about the Artest Melee? What if A-Rod and Ryan Howard started making out at first base during the World Series?

Vikings (-2.5) over CHIEFS
Let’s look at this rationally: The Vikings played San Diego, Tampa and Detroit close and blew all three games. If I wrote a power rankings column this week, I would have ranked Detroit fourth, San Diego eighth, Tampa 11th … and Kansas City 32nd. Minnesota can’t win this game by three?

Bill Simmons is the editor-in-chief of Grantland and the author of the recent New York Times no. 1 best-seller The Book of Basketball, now out in paperback with new material and a revised Hall of Fame Pyramid. For every Simmons column and podcast, log on to Grantland. Follow him on Twitter and check out his new home on Facebook.

A Running Diary of Game 162

BROWNS (PK) over Titans
If you thought defenses were keying on Chris Johnson before, just wait until these next 13 games without Kenny Britt. Could we be headed for the single most disappointing fantasy season since 2006’s Daunte Culpepperocalypse? It’s in play. In other news, the Madden Curse has been a little weak this year. Threatening to make Peyton Hillis miss a game with strep throat? That’s the best you can do, Madden Curse?

Redskins (-2) over RAMS
I like this Redskins team in any situation except “We’re down by four, there are two minutes to go … Rex, drive downfield and win the game for us.” And yes, I’m wavering on my “Rams will start 0-7 and still win the NFC West” prediction because …

EAGLES (-9) over 49ers
… the Niners might be this year’s Good Bad Team (a.k.a. a forgettable team that beats all the other forgettable teams). That won’t help them this week, though. Here’s why this line is so high: Vick or no Vick, San Fran averages 3.7 yards per play and gives up 5.0 yards per play; Philly averages 6.0 yards per play and gives up 5.5 yards. San Fran can’t throw the ball at all: 505 passing yards total, no wide receiver has more than 80 yards. San Fran is built to play tight games, so if Philly blows it open, literally, there’s no way San Fran can come back unless Ted Ginn starts ripping off kick returns. I’m laying the nine. Cautiously.

(Hey, remember two weeks ago, when I wrote that “you have GOT to try the Theron” story about having Michael Vick on two fantasy teams? There’s a reason Charlize Theron isn’t married.)

Saints (-7) over JAGUARS
New Orleans is averaging 34.7 points per game. Jacksonville is averaging 9 points a game. So … yeah. In other news, the “First 2011 Coach Fired” pool is turning into one of those exciting sausage races like the ones the Brewers have: The kielbasa (Todd Haley) has the early lead, but wait a second, here comes the bratwurst (Jack Del Rio) and the Italian sausage (Tony Sparano)!!!!!!!!!!!!!!!!

TEXANS (-3.5) over Steelers
Feels like Pittsburgh is headed for one of those “everyone writes them off, they do just enough to sneak into the playoffs, only as that’s happening, they’re getting everyone healthy and quietly righting the ship, and then the playoffs start and everyone realizes that we should be scared of Pittsburgh” seasons? Trademarked by the 2010 Packers, of course.

CARDS (+1) over Giants
I hate this game: You can either go with “Arizona is sneaky-good at home and the Giants are overvalued” or “Always taking the Giants’ pass rush against a skittish QB who loves throwing off his back foot” and either train of thought would be right. But let’s say the Giants win this one — their next three games are home against Seattle, Buffalo and Miami. Can you really see this particular Giants team winning six straight and bringing a 6-1 record into their Week 9 Helmet Catch Redux game in New England? Me neither. By the way, “Passes Kevin Kolb throws off his back foot” should be a Vegas prop every week. If this week’s number was 14.5, I’d take the over.

CENTURYLINK FIELD (+4.5) over Falcons
Might as well list the stadium instead of the team since it’s the only good reason to pick the 2011 Seahawks.

PACKERS (-12.5) over Broncos
The Packers haven’t played a kick-ass, start-to-finish game yet. It’s coming. Hey, isn’t it time for Antonio Gates to pass the Best Fantasy Tight End Torch to Jermichael Finley? It’s a little like the WWE title in the old days, right? The title changes hands only every few years, and you can remember every champ: Ben Coates, Shannon Sharpe, Tony Gonzalez, Gates, and now it feels like Finley is next unless we figure out a way to make Aarob Gronkandez happen.

Dolphins (+7) over CHARGERS
Can San Diego keep bringing Norv Turner back every year until I remember to bet against them for an entire September?

Patriots (-4) over RAIDERS
I get it. You want to pick the Raiders. It’s a fun pick. You want to think Richard Seymour is going to be fired up, that Darren McFadden is going to run amok, that Jason Campbell is going to complete a couple of bombs, that the fans will carry them the rest of the way. Just remember three things …

1. The Pats lost last week. Their record after losses in the Belichick/Brady era is something like 950-2.

3. Oakland’s secondary is in shambles post-Nmamdi — it’s banged up and wasn’t even good to begin with. The Raiders gave up 937 passing yards and six passing TDs to Kyle Orton, Ryan Fitzpatrick and Mark Sanchez. Brady has thrown for 1,327 yards and 11 TDs already. Unless it’s one of those “everything went wrong” games (like what happened in Buffalo last week), the Pats should move up and downfield at will. So if you’re picking Oakland, you’re saying that (a) the Raiders are going to score 35-plus points, or (a) for the second straight week, the Pats’ offense is going to have an “everything went wrong” game. Believe me, those four points look enticing. I know. I thought about it. And then, I kept thinking about the Pats leading 34-10 in the third quarter and CBS throwing up one of those “BRADY: 30-32, 345 yards, 4 TDs” graphics. He’s just done it too many times. This is a stay-away game if anything.

Jets (+3.5) over RAVENS
This feels like the “After This Game, You’ll Start Looking For Reasons Why One Of Us Will Miss The Playoffs” Bowl. I love getting that extra half-point. Also think the Jets will be fired up for this one. Screw it, let’s make it my Pseudo-Upset Special: Jets 23, Ravens 17.

BUCS (-10) over Colts
Curtis Painter, on the road, on a Monday night? This feels too good to be true. I feel like I’m about to be fleeced in a Ponzi scheme or something.