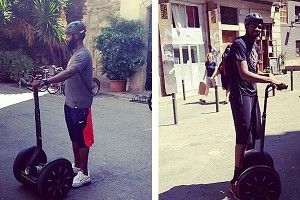 No. Literally. It’s a picture of them rolling. Okay, not literally. This is more the moment before the rolling. This is another Team USA production of a film by Deron Williams (a.k.a. the Annie Leibovitz of the United States Men’s Basketball Team). I think it was Hemingway who said the best way to see Barcelona is by Segway, right? Kevin Durant seems all in on the idea, but does The Beard? No so much. He looks like maybe he’s had one or two Segway-based pranks pulled on him. Maybe Thabo and Royal Ivey put him on one that had a faulty gyroscopic sensor and it was … I mean, that was funny. But not something Harden wants to repeat! Am I right?!