Phillies Fans React to Game 4: Everything’s Gonna Be All Right 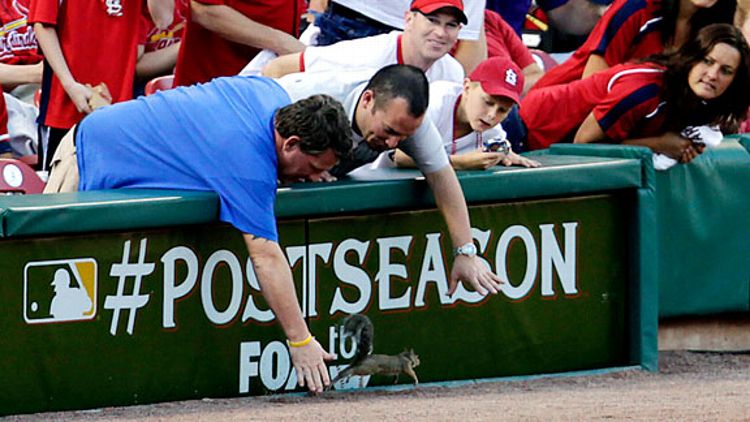 Grantland’s two resident Philly phanatics, Chris Ryan and Andy Greenwald, had so much fun recapping the Phillies-Cardinals Game 3, we invited them back for a chat about Game 4, which the Phillies lost, 5-3. Get ready for some brotherly love.

Chris Ryan: So after Chase Utley got thrown out at third base by God’s bouncer, Albert Pujols, in the sixth, I pretty much knew Wednesday was not going to be our night. I feel OK about this for two reasons:

1. No matter what happens on Friday night at the Bank, we can at least take solace in the fact that we no longer have to see the Phillies play in that off-brand, circus tent of a stadium — a place where it is simultaneously day and night and wild animals roam free. Speaking of wild animals, are you telling me the Cardinals ball girl couldn’t snag that Oswalt-distracting squirrel? For shame, Jennifer Lawrence from Winter’s Bone! Don’t make Cliff Lee pull your Ozark card! Speaking of animals, let’s talk about my spirit animal …

2. I didn’t see Roy Halladay in the dugout. That’s probably because he was hanging out in Birdman’s cash cave from the “Money to Blow” video. I think I always get in trouble for being too calm and too optimistic with you, Andy (this stems from never actually dying after a sports team I like has lost a game), but I think it’s OK to feel confident here.

I mean, what’s the point in having a man who does nothing but win games, watch tape, run stairs, and fly model airplanes if you can’t be psyched about having him on the mound for an elimination game? This is like taking Rain Man to the blackjack table! And what’s the point of cheering for a team that wins 10,000 regular-season games (even if Ryan Howard has adjusted his stance so that he is standing in right field when he comes to the plate and nobody below Hunter Pence in the lineup is hitting better than .250 for the series) if you don’t think the Phillies can win one more, in their yard, with their fans (who actually know how to cheer) (No shots) (Actually, SHOTS)?

Oh, and this one is dedicated to David Freese: I really hope you enjoyed your one shining moment and had a really cool night dancing to “All of the Lights” in front of your mirror, alone. But I saw you throw that side-eye at Utley when he went head-first into third base. All I’m saying is don’t poke the Physical Graffiti listening bear. You know what’s cool about Utley? He doesn’t even give a crap about Led Zeppelin; he just thinks “Kashmir” (his batter introductory music) is “good and intense.” I don’t know what I’m saying other than: Go Phillies. It’s Operation Lock the City, 2011. Praise the Lord and pass the Under Armour! Let’s do this.

Andy Greenwald: It’s been about 12 hours since I fled the bar with my game face long since off. I think I listened to Blink-182 a lot on the subway. A Jealous Sound song made me reflect on the life choices that got me here. If Jimmy Eat World had shuffled its way onto my iPhone I think I would have either started a livejournal or joined the Peace Corps. Chris. I am 34 years old. It’s the first round.

A word here on the Cardinals. They are by far the hardest opponent these actually good, Nü Phillies have ever faced in the postseason — and yes I’m including the 2009 World Champion Yankees, the ridiculous beards of last autumn, and a certain purple-clad team riding the thunderous bat of Kaz Matsui. (Did you know I was at that game in 2007? By myself? Waving a white rally towel that felt even then like a flag of surrender? Remind me again how sports fandom is in any way different from being a teenage goth. More beer, I guess. Brighter colors?) The thing about these Cardinals is that they hit everything. Fastballs from Roy Oswalt. Looping curves from Cliff Lee. Changeups from Cole Hamels. And, by extension, my forehead, when it bangs against the bar in despair. I can’t imagine rooting for them is much fun — I haven’t seen this many uncharismatic bros since the Blink-182 concert — but they are brutally effective. My nightmares are haunted by thumbheads like Matt Holliday complaining about sore fingers, yet managing to flip the middle one toward the Ben Franklin Bridge. To top it off, I honestly don’t think there’s been an inning yet in this series in which Albert Pujols hasn’t had an at-bat. The only thing crossing the plate with more annoying frequency than rando Redbird infielders is the goddamned squirrel.

I must take issue with one of your points, however. (Not Ryan Howard’s new/old batting stance, though. I love that dude like Pujols likes novelty necklaces, but he’s ceding more territory than Chamberlain in every at-bat. I can’t be the only one who watches him set up shop somewhere near the pistachio vendors and desperately starts looking for the Xbox controller to move him closer to the dish.)

Forget the bottom half of the order, let’s focus on the top. Jimmy Rollins is batting .563 in this series! His slugging percentage is higher than Hall of Famer Ryan Theriot’s. So don’t tell me Hunter Pence’s socks are the only ones doing the heavy lifting. The problem is what it has been for the Phillies ever since the middle of last season when Placido Polanco drank from the false grail and his body began to turn to dust: Their bats are narcoleptic, prone to fall asleep or wave through Arthur Rhodes sliders at precisely the wrong time. In a seven-game series, I’m actually fairly confident the home nine would come out on top. But in a five-game crapshoot, all bets are off. Only fools and Earl Weaver live and die on the three-run homer and I’m pretty sure Earl Weaver never let a 41-year-old southpaw make him look silly on national TV.

That said, a strange sense of calm has come over me. One game for one-third of the marbles. The best pitcher in baseball on the mound. A packed, home ballpark. Young James swinging a hot bat like Keak da Sneak was back in vogue. If you had to draw it up, this is how you’d do it.

Of course, it’s probably not calm I’m feeling, but mortifying, paralyzing terror. Time to scrunch my hoodie tighter and take refuge in the sage words of poets: “a day late / a buck short / I’m writing the report / on losing.” I’m not proud of what I’ve become, Chris! You stay positive for the both of us. Until Friday.