Hazy Forecast: What’s to Come for Oregon State and the Pac-12 North 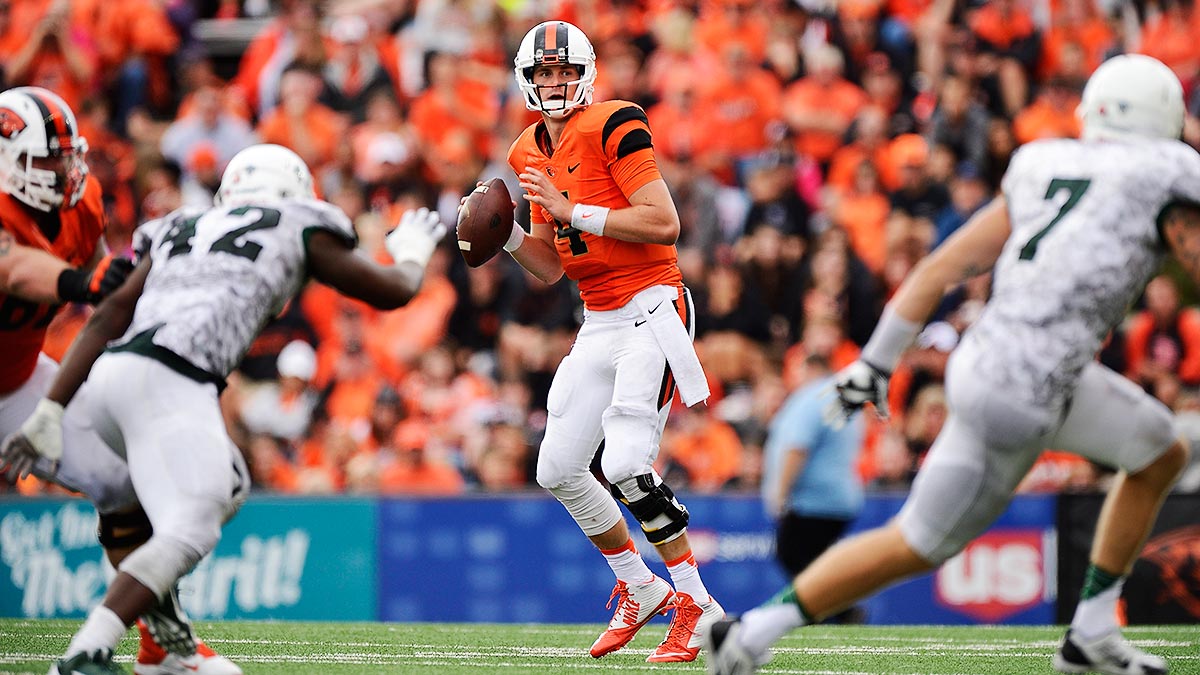 Two weeks into the 2014 season, we’re not quite sure what to make of the Pac-12 North, which many thought would be one of the deepest divisions in college football. That’s OK. Two weeks is a blip. But while we’re still hoping, as always, that a close race will develop for the conference championship game berth, what looked a month ago like a mini-scrum at the top of the division now looks like Oregon winging away with a comfortable lead in league supremacy and the rest of the North standing on lead feet of various weights.

Again, it’s still September. It’s not even the midpoint of the first month yet. Teams get better. By early November, Chris Petersen may have Washington sitting pretty and Stanford may have recovered from whatever the hell this was, but right now, this is the intel we have to go on:

• Cal (2-0): one single-touchdown win over a Northwestern team that went on to lose to NIU, one blowout of FCS squad Sacramento State.

• Oregon State (2-0): one 15-point win over FCS side Portland State, one eight-point win at Hawaii.

• Washington State (0-2): one three-point loss to Rutgers, one 11-point loss at Nevada.

Of the teams in the Pac-12 North, the Ducks have both the best single win and the best overall résumé; it’s not just that they beat the defending Rose Bowl champs, but how they beat the Spartans. The adjustments required and executed in order to come back on Michigan State bode well for Oregon in what’s still a conference thick with competition in the Pac-12 South and filled with traps, if not outright threats at the moment, in the North.

Where, then, do we plot the Ducks’ division-mates? The next best chance to get a good read on a Pac-12 North team will probably come right up Route 99, in Corvallis: Over their next two games, the Oregon State Beavers are the only squad in the division that will play two FBS teams that finished 2013 with winning records. After a bye in Week 3, OSU will host San Diego State in Week 4 before traveling to USC, so by the end of September, the discerning sports fan can reasonably expect to have an informed opinion of Mike Riley’s latest batch of Beavers.

What that opinion will be depends, in part, on what the Beavers offense looks like minus longtime coordinator Danny Langsdorf, most of last year’s offensive line, and [ominous gong sound here] 2013 Biletnikoff winner and current New Orleans Saint Brandin Cooks.

Structurally, not a lot will change for the Beavers with John Garrett leading the offense instead of Langsdorf. This is still Riley’s scheme. But it’s hard to know what to expect, especially after last season. The Beavers took viewers on a weirdly symmetrical rocket ride in 2013 (FCS loss to open the season, six-game winning streak, five-game losing streak, bowl win), and that was with Cooks’s big-play tendencies and prolific quarterback Sean Mannion working in tandem to fuel the offense. That production won’t be readily replaced, and whether Riley wants it or not (and he professes to), he’ll field a more evenly distributed attack this year.

“Last year, we kind of got out of balance,” says Mannion, a generous admission from a guy who benefited from that imbalance to the tune of 4,662 passing yards. “I think that’s fair to say. It is [fun to watch], but what I consider to be the most fun is winning games.”

“At first it was lonely,” says running back and noted Cooks BFF Storm Woods. “But it’s bittersweet, seeing [Cooks] able to follow his dreams and provide for his family. And seeing what caused that, because that was my roommate. So if anything, I’m pushing myself now.”1 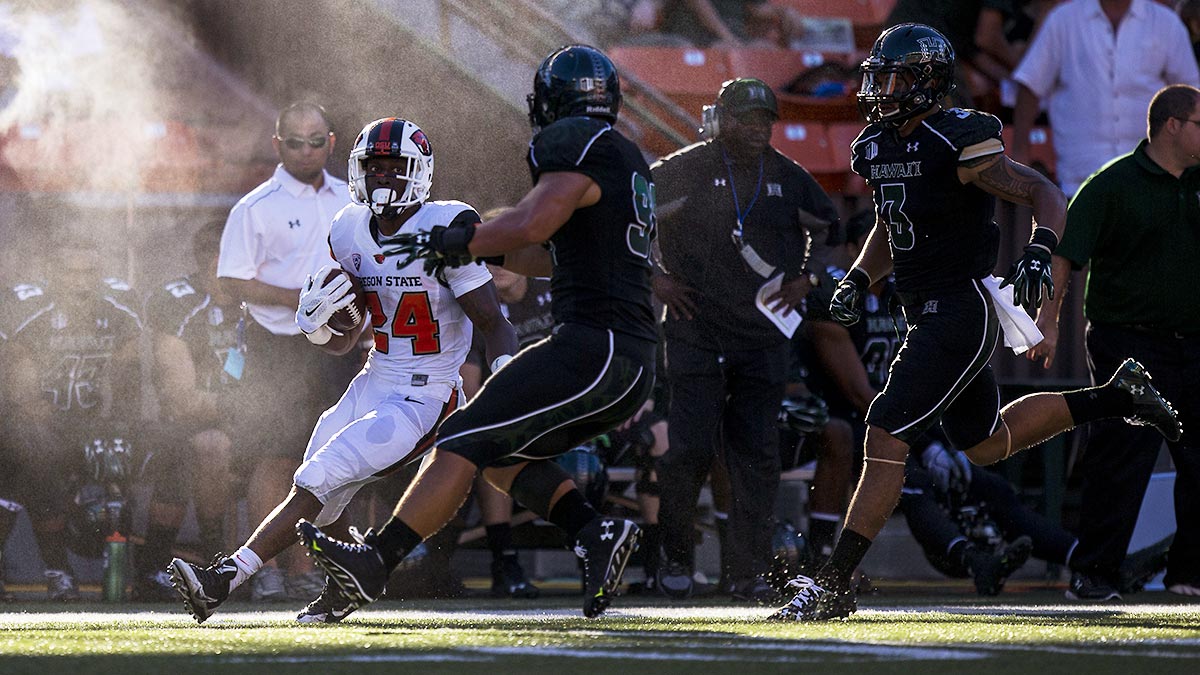 With two games banked and the start of classes still a couple of weeks away, the Beavers have been treating their early season like an extension of camp. Mannion works to build organic chemistry with his rebuilt offensive line; Texas native Woods torments the running backs’ meeting room with Blake Shelton songs on repeat; the offensive veterans are subbing footwork for homework. Woods, country music fandom aside, is working to reduce his dancing in the backfield. He doesn’t have Cooks encouraging him at all hours anymore, but sharing carries with Terron Ward provides plenty of motivation. “Terron’s more of a bowling ball guy,” says Woods, “bouncing off a lot of tackles. Me, probably a little faster, a little shiftier.”2

Mannion, who returned to school for his senior season after receiving a third-round NFL draft grade, is focused on perfecting his drop patterns, cognizant that without Cooks on the other end of his passes, the margin for error through the air has narrowed. And though that particular tandem will never be resurrected at the college ranks, the Beavers do have a promising lead on their next big downfield threat, Victor Bolden. “He’s not gonna be another Brandin Cooks,” says Mannion. “He was one in a million, and I think that’d be a lot of pressure to put on Victor. But he’s an outstanding player.”

It’s also easy to forget, incredibly, that even with the loss of Cooks and his 1,700-yard junior season, the Beavers return an additional receiver, Richard Mullaney, who amassed nearly 800 yards’ worth of catches from Mannion, and an experienced pair of tight ends in Connor Hamlett and Caleb Smith. And Oregon State will need them all starting in Week 4, when an Aztecs squad that was an end zone interception away from upsetting North Carolina in Chapel Hill comes calling, to say nothing of Week 5 in the Coliseum. Oregon State’s remaining games against ranked conference opponents are well spaced throughout the back half of the season, but getting one more win before September expires will be essential to the Beavers’ postseason aspirations.

Even with all of these weapons at his disposal, and even knowing it’s his last season to build a body of work for NFL scouts, Mannion isn’t rankled at the prospect of putting up lower numbers as a senior.3 “Five years from now, I might not remember how many yards I threw for, but I’ll remember celebrating with my teammates.

“You remember the wins, not the stats.”