The Year of the Land Shark: Ole Miss Assumes the ‘SEC Defense’ Mantle 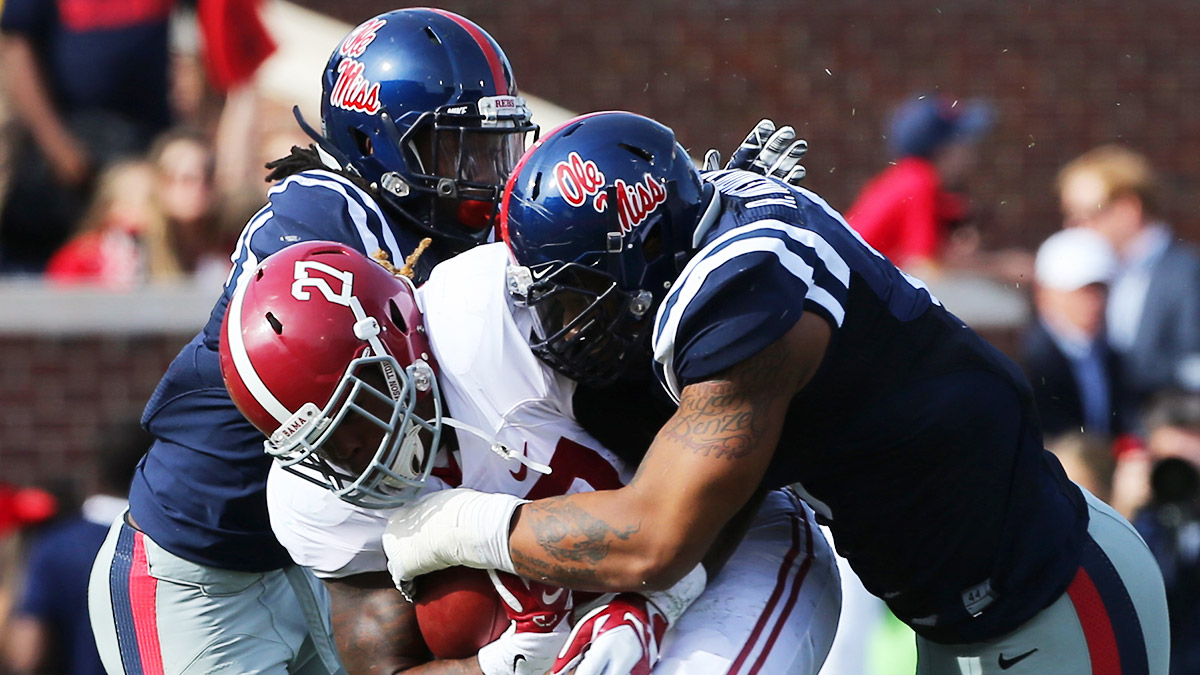 These days, the specter of “SEC defense” functions more as a brand than as an accurate, quantifiable reality, and, frankly, it may be more useful that way. In actuality, offensive numbers have risen in SEC games over the past five years as reliably as they have across the rest of college football. The spread, derided for most of the past decade as a fleeting gimmick confined to the sport’s lower orders, is now an entrenched motif in the South, just as it is everywhere else. But Ess-Eee-See defense has always been more of a collective ideal than a cold, hard fact anyway. The notion that the conference’s seven-year BCS winning streak from 2006 to 2012 was defined by a stubborn insistence on fielding dominant defenses in an increasingly offensively oriented sport was largely a reflection of how SEC fans like to define themselves: tough, dependable, and substantial in an era of empty showmanship. In the end, traditional virtues can still win championships, and they have the proof.

That posture is a little harder to maintain now that both the winning streak and the BCS itself are relics. The defending SEC champion, Auburn, runs a hurry-up offense and inarguably boasted one of the worst defenses in the league last year en route to the title. The current front-runner, Mississippi State, is ranked no. 1 in the national polls and ranked dead last in the conference in total defense. Even Alabama’s Nick Saban, of all people, is making grudging concessions to the spread revolution. Roughly half the conference schedule still lies ahead, but it’s a safe bet that the most high-profile, far-reaching SEC blockbuster of the season will not be decided by a final score of 9-6.

When Ole Miss hired Hugh Freeze as its new head coach, in December 2011, it thought it was getting out in front of the trend: At his previous Division I stop, Freeze had deployed an up-tempo, no-huddle philosophy that made Arkansas State the highest-scoring team in the Sun Belt Conference in his only season on the job. The Rebels, on the other hand, had just finished a campaign in which they’d yielded 36.5 points per game in conference play, nearly a full touchdown more than any other SEC defense. What better way for a last-place outfit in the midst of a 14-game conference losing streak to realistically expect to get up to speed than by scoring points?

So it’s with no small amount of irony that, nearly three years later, Freeze found himself explaining to reporters why his offense appears to be the only one in the conference that’s deliberately slowing down (emphasis added):

“You’re more concerned now with not putting yourself in the hole because of negative plays, whether they be turnovers or negative-two (yards) or negative-threes,” Freeze said. “When you go fast the possibilities increase as defenses catch up to it. It used to be that I didn’t really worry about it but now where we can go with a fast offensive call, defenses have gotten to where they have a fast call too. …

“I think (the relaxed tempo) has helped Bo (Wallace) manage the game more but when the defense has played like it’s playing, you just want to make sure you’re managing the game from an offensive perspective and it gives you the best chance to win.”

That’s an unlikely sentiment from an ostensible spread coach, especially at a moment when “tempo” is the order of the day and “game manager” is a term more likely than not to be interpreted as an epithet. But it’s also an apt one, because against all odds, no team has carried the banner for old-school SEC defense as high over the first two months as Ole Miss.

Freeze himself seems slightly surprised by that development, as he should be; Ole Miss hasn’t finished among the top six defenses in the conference in yards or points allowed since 2009, and it was far from an elite unit then. Against FBS offenses in 2014, the “Land Sharks” are one of the top six defenses in the nation in just about every relevant category: They’re first in scoring defense, fifth in total defense, sixth in rushing defense, third in pass efficiency defense, third in defensive yards per play, and first in takeaways.1 Among the top 20 teams in the AP poll, Ole Miss is averaging fewer points per game (35.4)2 than any except Notre Dame (33.4), yet by any measure the Rebels have been one of the two or three most dominant outfits in the country en route to a 7-0 record. Last week, they held Tennessee without a touchdown in a 34-3 rout in Oxford, despite six three-and-outs by the Ole Miss offense on its first seven possessions. Two weeks ago, they held Texas A&M to seven points through three quarters in a 35-20 decision in College Station, limiting the bulk of the Aggies’ offensive production to garbage time. The week before that, the Rebels out-Bama’d Alabama, holding the Crimson Tide to a single offensive touchdown in a 23-17 upset that launched Ole Miss into the national conversation.

Ole Miss has allowed 20 or fewer points in 9 straight games, easily the longest active streak in the FBS. pic.twitter.com/fNj5OV3LDF

That kind of consistency on defense is rare in the current climate, to say the least. Since the start of 2010, only six other schools have held opponents at or below 20 points in at least nine consecutive games. Alabama put together separate streaks in 2011, 2012, and 2013. LSU also did it in 2011, the pinnacle of the Ess-Eee-See defense era. Stanford (2010-11), Notre Dame (2011-12), Florida (2012), and Florida State (2013) also joined the club. Between them, those teams combined for a 109-11 record in the corresponding seasons, 43 weeks atop the AP poll, and three national championships.

For the vanishingly few defenses capable of pulling off such a streak, in other words, it’s one hell of a blueprint. Heading into another major SEC West collision on Saturday night, at no. 24 LSU, Ole Miss is the only defense in the SEC or any other conference that occupies that territory. No others can be seen for miles around.

On paper, there are no shortage of candidates for individual pedestals. Senior safety Cody Prewitt was a preseason All-American and has looked the part with a team-high 27 solo tackles and two interceptions, one of which he returned for a touchdown at Texas A&M. Sophomore safety Tony Conner, a former five-star recruit, leads the team in total tackles. Senior cornerback Senquez Golson has seven interceptions, one off the national lead, including the game-clinching pick against Alabama. True freshman Marquis Haynes has emerged from nowhere to record a team-high 6.5 sacks, including 4.5 in the wins over Texas A&M and Tennessee alone. Haynes has also forced three fumbles, best in the SEC. The Rebels are deep, experienced, and productive at every position; just as important, they’ve stayed healthy.

If you want one name to watch this weekend, though, the biggest difference-maker on the defense barely shows up on the box score at all: Through seven games, sophomore defensive lineman Robert Nkemdiche has been credited with a grand total of 17 tackles (six solo, 11 assists) and two sacks, an utterly forgettable stat line that belies his very memorable impact along the line of scrimmage. On film, Nkemdiche shows up everywhere, sometimes for no other reason than the sheer spectacle of his violent disposition. More often, it’s because he’s creating many of the plays that wind up being credited to his teammates.

It’s actually a shame that Nkemdiche hasn’t been able to bring down opposing quarterbacks more often, because he fully deserves the recognition as a disruptive pass-rusher. Although he’s listed as a defensive tackle this year, Nkemdiche arrived in Oxford last year as the most sought-after defensive end prospect in the 2013 recruiting class, and he still lines up on the edge on a regular basis; despite his bulk — Ole Miss lists Nkemdiche at 6-foot-4, 280 pounds, which is almost certainly a few square meals too light — he still has the rangy frame and athleticism of an end.

Here’s Nkemdiche blowing past Texas A&M’s senior left tackle, Cedric Ogbuehi, who is (or at least was) widely considered a lock for the first round in the 2015 draft; the result was a panicked overthrow from A&M quarterback Kenny Hill as Nkemdiche closed in, an easy pick for Prewitt, and a direct path to the end zone, all stemming from the initial pressure.

If sacks came with an “assist” category, Nkemdiche would be faring a little better on the stat sheet. On this play, Nkemdiche (lined up over the right guard at the snap) was the first to arrive in the pocket after beating his blocker with a spin move, and although no. 5 didn’t complete the takedown, he did get enough of Hill to make him a sitting duck as Haynes (initially lined up over the left tackle; not a stellar night for Ogbuehi) arrived to clean up.

A few minutes later, Ole Miss ran a simple twist with Nkemdiche and Haynes (lined up over the right guard and right tackle, respectively), which resulted in both blockers following Nkemdiche on his rush to the outside — because we just saw what happens when you attempt to take him on one-on-one — thereby leaving Haynes untouched for a free run at the quarterback on the inside. Hill never stood a chance.

None of this suggests Haynes can’t create pressure on his own accord, which he most certainly can; so can senior C.J. Johnson, who was once a fairly blockbuster recruit in his own right. But Nkemdiche is the kind of outsize, blue-chip presence on the front line who has been the hallmark of the most feared and revered SEC defenses of the past decade: He’s squarely in the tradition of huge, dynamic athletes like LSU’s Glenn Dorsey, Alabama’s Marcell Dareus, and Auburn’s Nick Fairley, all of whom starred on national championship teams before becoming top-15 draft picks.

Nkemdiche’s presence alone changes the way opposing offenses operate, and it has already changed the way Ole Miss evaluates its own potential after decades as an afterthought. As for the rest of us, if we’re not on board already, a few more weeks of this and we’ll have no choice but to follow suit.