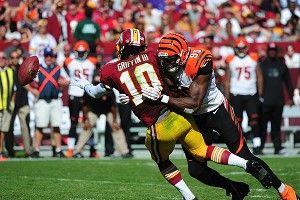 The night before I’d been at a party where all the women ended up in the kitchen talking about football and all the men ended up out on the balcony talking about The Master. (This is why I’ve never felt the need to care about football before; I’ve always been able to find other things to have stereotypically minutiae-heavy conversations with other dudes about.) I went inside for water; as I fumbled with the Geordi La Forge touch-screens on the refrigerator door, I listened to my wife explaining how she ended up dominating her office’s fantasy league without even trying.

She’d been an Eagles widow in a former life; after that the entire sport was dead to her, for years. But they’d bugged her to join the league at work. “Fine,” she said, “I’ll take Tebow and Gisele’s husband.” It was explained to her that it didn’t work that way; she agreed to do the auto-draft, and the auto-draft gave her an unstoppable army of football samurai. Now other dudes from her league pass her in the hallway at work and say things like, “I’m comin’ for you this weekend.” They assumed she’d handpicked her team, that she was some kind of a fantasy-football genius; she allowed them to believe this. A woman who can beat a man at his own meaningless bullshit has a certain allure.

This much was clear: I should have joined a fantasy league. Then I’d have a franchise-agnostic reason to care about all the football. Now it was too late. Richard Feynman and I found a table in the middle of a room full of big-screen TVs, drank Bloody Marys backed up with beer. I told him that in order to make this column work, I’d decided that I’d have to pick a team to root for. He explained to me that there are certain teams you can’t just decide to start rooting for without seeming like a bandwagoneering asshole. On like-rooting-for-IBM grounds I ruled out Green Bay, Dallas, and New England. I ruled out my friends’ favorite teams, too — this meant no Jets, no Saints (much as I respect both New Orleans’ contributions to American culture and the undeniable trill-ness of “Kill the head, the body will die” as an defensive philosophy). I grew up in San Francisco, and 49er fandom is the closest thing I have to a genetic football legacy — I remember my dad screaming “NINERS” out the window like Howard Beale when I was a kid — but I live in Los Angeles now, and rooting for Northern California felt needlessly iconoclastic. I thought about becoming a Giants fan, because that was Fred Exley’s team, or backing Detroit, because “Megatron” is a cool nickname.

Then Feynman started telling me about the Cincinnati Bengals and their legacy of sheltering recreational drug users and barroom brawlers. The more I heard, the more they sounded like America’s Team — plus the tiger-striped helmets reminded me of the CIA-front Tiger Kab company in James Ellroy’s The Cold Six Thousand. I texted my friend Niels Bohr and told him I was now a Bengals fan. “Welcome to the hurt locker,” he wrote back.

I do not have thoughts about Sunday’s actual games, although apparently I was a good-luck charm for the Bengals, who outlasted the Redskins 38-31 in an exciting game that unfolded on a screen we couldn’t see because of a pillar. I had more drinks than I am accustomed to having before 1 p.m. and my note-taking got pretty unfocused; I found myself writing about game-day fashions for women. It was a kiln-hot day outside and all the women in the room seemed to be wearing jerseys with short-shorts, a weird top-heavy silhouette.

They all looked like Wheaties boxes with legs. The Centaurs of Sunday, half-bro and half-lady. I wrote beer-smeared notes about performative masculinity and whether dudes who are into girls who wear football jerseys actually yearn to sleep with a shapelier version of themselves, or possibly Tom Brady. Of course I was projecting; if anyone was performing masculinity in that room, it was me.