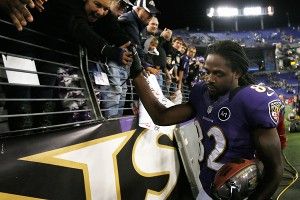 In the minutes before the Ravens and Patriots kicked off last night, I was on a stool in a sticky-floored shithole in Hollywood. A couple friends were celebrating a birthday, and I’d managed to beat the party. A few sips in and half paying attention, I looked up to see a shot of Torrey Smith sitting alone on the Ravens bench. His head was in his hands. Through conversations amplified by an afternoon of drinking, I heard Al Michaels, and “younger,” and “brother,” and “died.” It had been a while since I last cried, but as Smith looked up and wiped his eyes, I did too.

Yesterday’s first seven hours of football was a perfect collection of whatever divergent feelings I have about the game these days. Before the first set of games, Jumbotrons across the country paid a near-perfect tribute to Steve Sabol. Lombardi, Butkus, and Elway flashed by to a soundtrack that has defined how so many of us have fed upon the game, and I texted a friend the most eloquent sentence I could manage: “Man, I really love football.”

It wasn’t long after that the brutality started. The violence is never absent, but the cringes seemed more pervasive yesterday — Tony Romo taking a face mask in the earhole, Darrius Heyward-Bey lying in the end zone, Kerry Rhodes disassembling Eagles. As player after player was scraped off the field, I couldn’t remember a Sunday when I was less convinced about the future of the sport. At contact, the most frightening moment came during the third quarter in Denver — Matt Schaub, fresh off a helmet to the chin, lying on the turf, grasping the sides of his head. That’s about when I looked up at the room and said the only thing I could: “How much longer can they do this?”

That combination of these difficult-to-reconcile feelings is not new. It comes every time we learn something new about CTE or player life spans or benefits given to retirees. No matter how substantial the guilt, we keep coming back. Most of the time, I’m not sure why. Last night, I was.

The common question throughout the game was how Torrey Smith could possibly play football. He was more than just a brother to Tevin. He helped raise him. He learned about his brother’s death about around 2 a.m. He hadn’t slept. At a time when many of us would be reduced to nothing, here was Smith, in front of 70,000 people, having the courage to honor his brother, to start his healing in front of a national audience.

I didn’t see it that way, and as Smith hauled in his first touchdown, pointed to the sky, and met the embrace of his teammates, I still didn’t. The Ravens have always felt different. When Ed Reed lost his brother before a playoff game in Kansas City two seasons ago, there was sanctuary among his teammates. Last night was no different. Ray Lewis and John Harbaugh were there for Torrey Smith.

But so was the game.

It had been less than 10 hours from the moment he heard the news until he put on his shoulder pads. There was no healing last night. There was only refuge, and as stands arise against football’s barbarism, that refuge seems to be forgotten. We know enough now to conclude that football is bad for us. Football will destroy us. For many, what happened to Torrey Smith early Sunday morning would do the same.

This is not meant to take away from the courage Smith showed last night. He scored two beautiful touchdowns when bringing himself to his feet would have been enough. What can’t be overstated is how much that helmet helped keep him there. No matter how big the crowd, football is full of quiet, insular moments, and as much as Smith retreated to the embrace of family, he fell just as strongly into the shelter of the familiar. There was haven in those lights, and as for knowing what’s best for grown, autonomous men, that’s something neither I nor anyone else can pretend to understand — the safety to be found in the unsafe game.