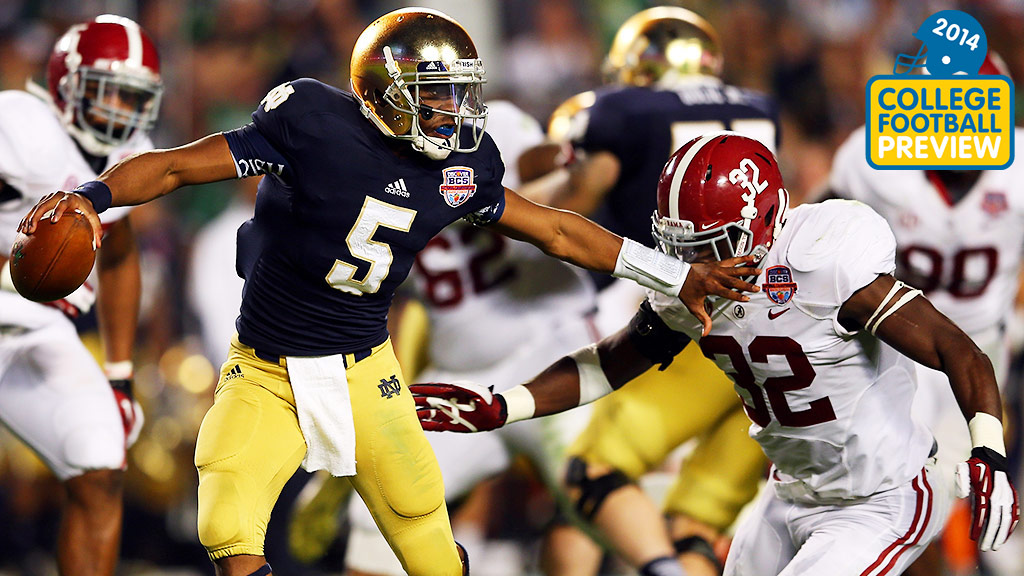 Ask a Notre Dame fan to pick the low point for the football program during the 2013 calendar year, and you’ll probably get one of three answers:

1. Alabama’s 42-14 annihilation of the Irish in the national title game on January 7. (This is the most likely response, though it’s also somewhat counterbalanced by the happy-to-be-there factor.)

2. The depressing realization, mere weeks later, that Manti Te’o had either fallen for the worst catfish scheme ever or had fabricated his girlfriend’s death in order to bolster his Heisman campaign and personal mythology.

I’m a lifelong Notre Dame fan, and no. 3 gets my vote. For one thing, the timing was awful. News of Golson’s academic-related exile didn’t break until Memorial Day weekend, by which time Notre Dame had already completed spring practice believing Golson would start at quarterback come fall. With the rising redshirt sophomore’s grip on the job seemingly ironclad, former five-star quarterback recruit Gunner Kiel had decided to transfer to Cincinnati in April, and coach Brian Kelly had elected to sign just one signal-caller in the 2013 recruiting class: the unpolished, redshirt-requiring Malik Zaire.

Zaire didn’t see any game action last season, but he’s currently engaged in a two-man battle to be Notre Dame’s starting quarterback in 2014. His competition? Golson, who rejoined the team in December after being readmitted to the university.

As ecstatic as I am to see Golson in blue and gold again, especially given how inexperienced Notre Dame’s offense is and how loaded the Irish’s schedule is, I haven’t forgotten the pain his dismissal caused. Golson’s abrupt ouster forced me to avoid the vast majority of season preview magazines, which had already gone to print, and which featured the QB’s demoralizing specter. I consider perusing these publications an annual rite of summer, but I was forced to avoid them. Reading about Golson’s chemistry with Notre Dame’s veteran receiving corps would’ve been highly dispiriting, and seeing him listed as a Heisman hopeful would’ve flat-out broken my heart. And don’t even get me started on NCAA Football 14; while playing it, I simply pretended that Notre Dame didn’t exist. I cannot recommend this voluntary delusion highly enough.

Golson’s dismissal also turned the hottest piece of Notre Dame apparel in recent memory into an object of national ridicule. Since both he and Te’o shared the no. 5 jersey during the Irish’s 2012 fever dream season, many fans (including yours truly) felt socially obligated to purchase a replica. While the aforementioned Lennay Kekua incident somewhat diminished the jersey’s luster, Golson’s three remaining years of eligibility made it seem like a solid investment — until the academic violation, that is. Now my no. 5 uniform hangs retired next to my “Charlie & The Weis Guys” shirt, which I once wore unironically. Maybe I’ll bring it back into circulation this fall.

Most of all, the infinite sadness surrounding Golson’s dismissal was amplified by the Tommy Rees Experience. With Golson gone, Kelly really had no choice but to hand the 2013 starting job to Rees, a seemingly zombified senior. To be fair, Rees had performed admirably as Golson’s backup in 2012 and boasted a 14-4 record as a starter, and unlike fellow 2010 recruit Andrew Hendrix, Rees possessed the ability to throw the football; to be blunt, Rees tended to intersperse generally competent quarterback play with backbreaking turnovers.

All Irish fans could do was hope that Rees’s days of throwing into quadruple coverage were behind him, but by early September, that wishful thinking had proven to be catastrophically wrong. It was hard not to pine for Golson, who’d been a relative paragon of consistency during the national championship campaign.

As if on cue, Sports Illustrated’s Andy Staples dropped an interview with Golson on October 29. In it, Golson admitted to cheating on a test and reaffirmed his commitment to Notre Dame, dismissing the notion that he ever considered transferring elsewhere. He’d be able to reapply to the university for spring semester, he said, and he fully expected to receive an acceptance letter. In the meantime, he’d been training with noted quarterback guru George Whitfield, who’d helped Golson improve his notoriously lax mechanics by making him grip the ball with the laces. Golson’s weight was up, and he’d been avidly following his former teammates from afar. He sounded about as dedicated to Notre Dame as any non-student could be.

After reading Staples’s interview, I did what any right-minded fan would do: I rewatched Notre Dame’s 2012 comeback against Pittsburgh, which Golson had spearheaded. For your viewing pleasure, I’ve embedded the video below.

Feel free to skip to the 3:01 mark, when the fourth-quarter rally begins in earnest: Golson connected with T.J. Jones for a 12-yard score, but Kyle Brindza shanked the ensuing PAT, keeping Pitt’s lead at 20-12. Then, with 4:04 to go (3:36 in the video), Golson threw a Rees-esque pick in the end zone. But he got another chance after the Irish defense held Pitt to a subsequent three-and-out (3:54), and the next three plays validated my belief that it’s always better to have a mobile quarterback in college football. The first was a 45-yard bomb to DaVaris Daniels, during which Golson danced around for eight seconds before releasing the ball; the second was a five-yard touchdown pass to Theo Riddick that came on the run; the third was a successful scramble for the two-point conversion that pushed the game into overtime, where Notre Dame ultimately prevailed.