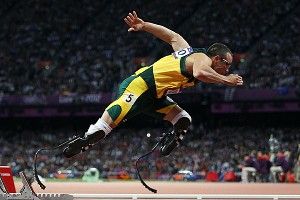 So, Oscar Pistorius — a man born without fibulae — is running in the Olympic Games. He qualified for the 400-meter semifinal on Saturday, and he’ll be on the South Africa team for the 4×400-meter relay later this week, an event in which he won a silver medal in last year’s World Championships in Daegu. And did I mention that he has no fibulae? I did? Good. It’s kind of a big deal.

Pistorius is classified as a T43 competitor, a group defined by the International Paralympic Committee as “double below knee amputees and other athletes with impairments that are comparable to a double below knee amputation.” Both his legs were amputated before he was less than a year old, but against all the odds he is now competing against — and beating — able-bodied athletes on the world’s biggest stage. For most observers, this is an inspirational story of the human spirit triumphing over adversity, but some people don’t see things that way. There are those who believe that Pistorius should not be allowed to run in these Olympics, as they feel that the carbon fiber prosthetics that he runs on give him an unfair advantage over able-bodied competitors, who are forced to drag their burdensome ankles around the track like fleshy ball and chains.

Now, it’s easy to be sarcastic, and the temptation here is to casually dismiss those opposed to Pistorius as stony-hearted haters. After all, if he really does get a significant advantage from running on prosthetic legs, how long will it be before the Olympics is riddled with mediocre athletes who bravely chose the legal option when faced with a choice between taking steroids or losing a couple of limbs? Surely we can resolve this controversy by waiting to see if this whole double-amputee craze catches on?

Many disagree, and feel we have to act now. Take Michael Johnson, the greatest 400-meter runner of all time, who recently went on record to say that although he considers Pistorius to be a close friend, he doesn’t think he should be allowed to run in the Olympics. “My position is that because we don’t know for sure whether he gets an advantage from the prosthetics that he wears it is unfair to the able-bodied competitors.” So now Pistorius has to prove that he gains no advantage from his blades. This is starting to feel a little like a witch trial: Either Pistorius runs on water, which proves he’s cheating, or he sinks and can compete.

The thing is, many scientists also argue that Pistorius should be banned. They’re principally concerned with his swing time — the interval between his strides. Pistorius’s swing time has been clocked at 0.284 seconds, which is certainly unusual. Able-bodied sprinters rarely exceed a swing time of 0.32 seconds, and the anti-Pistorius camp claims that his advantage in this area is entirely caused by his lightweight blades. As such, they feel he has an unfair edge over an able-bodied field, but this argument ignores two important points. Firstly, Pistorius is the only T43 athlete to have had his swing times measured in this way, and in isolation the data has questionable value. It’s plausible Pistorius’s swing times are to some degree the product of his being an exceptional athlete, and unless it’s proven that all T43 runners have unusual swing times, we can’t discount that possibility. Secondly, the swing time is just one factor that determines a sprinter’s speed, and while Pistorius benefits from a faster swing, he loses in other areas. He is able to apply far less downward force with his blades than an able-bodied sprinter can deliver with an ankle and foot, and he recoups far less energy in return. The debate rages in the Journal of Applied Physiology; you can read the case against Pistorius here, and the case in his defense here.

It seems that science cannot tell us what benefit — if any — Pistorius gets from his double amputation, and that leaves us with just two options; let him run, or follow the approach suggested by Michael Johnson and ban him because we can’t be sure if he profits or not, and that’s unfair to able-bodied competitors. But is it really necessary to be so concerned about the fair treatment of competitors like reigning 400-meter Olympic champion LaShawn Merritt, who failed three drug tests for banned steroids in 2009 and 2010? He received an automatic two-year ban, but was back in competition just 21 months later, in time to claim gold in the same World Championship 4×400 relay at which Pistorius got his (unfair?) silver medal. It turns out that the IAAF shortened Merritt’s ban after accepting his claim that he took the steroids unwittingly. Merritt’s excuse was very convincing, though; he says he failed to read the label of a penis-enlargement supplement that he was taking. Who’d want to lie about a little thing like that?

Joking aside, it’s an extraordinary state of affairs when a double amputee is told that he has an unfair advantage over a drug cheat (and whether Merritt took the steroids intentionally or not, the latest research states that they’re still improving his performance). There is an urgent problem affecting athletics, and it’s not the guy inspiring millions with his extraordinary achievements in the face of overwhelming odds. It isn’t the rampant level of drug use in the sport, either; that was an urgent problem once, but we’ve now moved way beyond that point. We’re now at the stage where we’ve become so used to doping that we worry about drug cheats being at a disadvantage in a footrace against a man with no feet. We’ve come a long, long way since Ben Johnson …