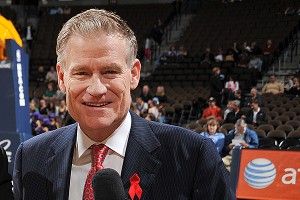 I spent the majority of the 1980s in a dank basement in central Pennsylvania, waiting out the winter by watching any and every late-night sporting event accessible on cable television. This means I grew up listening to a hell of a lot of Chris Marlowe. For great stretches of my life, I have forgotten Marlowe’s name, but his SoCal patter never fades from my consciousness, and every four years, it drifts back to me in a wave of chill nostalgia: Anything in the Pacific time zone, anything vaguely associated with dudes and betties and coastlines, was Marlowe’s territory, from cliff diving to Pac-10 basketball to the once-fledgling pastime of beach volleyball, which he is voicing, yet again, at this year’s Olympics.

There are a great many competent and even brilliant play-by-play announcers in this world, but Marlowe — whom I would count among the brilliant, if only for his ability to make “Rosenthal” sound like a suave surname — may be the most Spicoli-ishly awesome Californian ever to broadcast a sporting event. A graduate of Pacific Palisades High, a star volleyball player at San Diego, and the captain of the gold-medal Olympic volleyball team in 1984, Marlowe once posed with Ronnie and Nancy in Chewbacca-chested glory. His grandfather is the famed movie director Sam Wood, his mother was a regular on The Young and the Restless, and his father appeared in All About Eve and The Day the Earth Stood Still. Marlowe himself made guest appearances on The Love Boat (making out with a supermodel) and in Rounders; he’s broadcast poker and cliff diving and whatever other suave pastimes have taken place in and around Los Angeles in the past 25 years. In the early 2000s, he worked XFL games with Brian Bosworth, which is sort of like pairing Bill and Ted at a roller derby.

I have no idea what Marlowe’s daily existence is like, but I prefer to think it bears no resemblance to that of any other play-by-play man who ever lived. I prefer to think he spends his mornings surfing with Kato Kaelin, that he lunches with Thomas Pynchon to discuss to the possibility of narrating the film version of Inherent Vice, that the Coens borrowed the white Russian thing from him, that — even though he lives in Denver now — he helicopters from Malibu to Colorado for his job as the Nuggets broadcaster and then helicopters straight back in time to cop a tofu scramble at The Spot. I prefer to think that he spent last night at a London pub drinking chilled grappa with a posse of Italian beach volleyballers, that he had dalliances with both Misty May and Kerry Walsh before they became hyphenates, and that, when he chooses to turtle roll into the sunset, the sport of beach volleyball, bereft of his California English narration, will fade back into the gnarly realm of novelty.