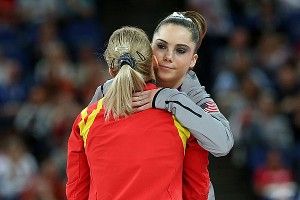 After McKayla Maroney’s feet skidded out from under her on the landing of her second vault during the event final, and after she landed unceremoniously on her butt, she looked like she wanted to kill someone. Her coach tried to hug her, but she kept her arms crossed tightly across her chest. Her mouth was set in a grim line. Her eyes were bright and narrow. The cameras were on her, up in her face. The NBC announcers were in fits of disbelief and dismay, having already promised, in no uncertain terms, that she would win the gold. In the stands, her teammates chatted with Duchess Kate. Maroney fiddled with her bag and kept her back to the scoreboard.

I would like to get on my high horse here and talk about the absurdity of prematurely awarding an Olympic gold medal to anyone, let alone a 16-year-old who has to perform a round-off with a half turn onto a vaulting table and then a laid-out flip with a full twist off of it, judging distance to the ground by her sense of the air alone. But the truth is that despite my dislike of making predictions (since I am almost always wrong), I was sure that she was going to win the vault gold. Sometimes, something happens with such consistency that you begin to believe it will keep happening, that it can’t not happen. I have begun to believe, for instance, that the sun will rise in the east, and that tomorrow will be Tuesday. And after watching and rewatching Maroney vault more times than I can count, I had begun to believe that she could not fall.

This was, obviously, a stupid belief. I had seen Maroney fall on bars, beam, and floor. (Gravity: another thing I’ve begun to believe in, more or less.) But I had never seen her badly stumble while competing on vault. And before the Olympics, I had never seen her do a single vault — not only her Amanar but her less-famous Mustafina — that made me doubt for a moment that she would win gold in the event finals, as long as she made the Olympic team.

Maroney is still far and away the best vaulter in the world, no matter what happened on Sunday. (The fact that she nearly won gold with a fall should say everything.) She is also a 16-year-old girl, and she is in a strange position. She is a home-schooled high-schooler, a queen bee without a hive, a diva whose daily drama is an ice bath. Her high school hallways are Twitter and Instagram, and her experience of high school life seems to be from ABC Family and MTV. Her USA Gymnastics bio is weirdly fascinating [sic throughout]:

Maroney does not want to be considered only as a vault specialist. When I went to the Olympic trials to write about her vault, she wanted to talk about her floor routine. She wanted to describe her desire to make “pretty gymnastics” and to “put on a show for everybody.” I asked her if she was tired of being asked about her vaulting, and she said no. “That’s my talent,” she acknowledged. But, she added, “I really want to be considered somewhat as an all-around gymnast. I know that it’s somewhat hard because there’s so many really, really good girls, and I kind of had like two mess-ups [on bars and beam] today, and I haven’t really been able to prove myself as an all-around gymnast for quite a while now.” It’s true that Maroney can look a little stuck up in pictures, but there was something poignant and humble about the way she spoke in that moment. And there was something poignant, really, about how fearsome and bitchy her face was after she fell. It’s possible that Maroney really did want to kill someone, but I’m pretty sure she was trying not to cry.

I hope she’ll come back in the next year or two and do a triple-twisting Yurchenko at the World Championships. (I’ll actually be a little surprised if she doesn’t — but I’m through with predictions.) Even if she never does another vault, though — even if she spends the rest of her life doing exhibition tours and hanging out by the pool while listening to Taylor Swift and Katy Perry — she will still have done the most exciting vault I’ve ever seen.