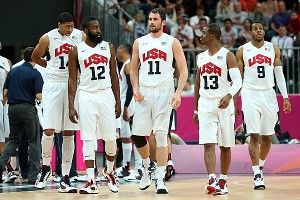 Jalen is back! After a couple weeks in London with Team USA, Jalen Rose returned to the Grantland Studio to give the people what they want.

With his trusty baseball bat slung over his shoulder, Jalen discussed his experience in London, what he thinks of the U.S. men’s basketball team, the real differences between the NBA and international play, a conversation he had with coach Mike Krzyzewski, and more. Then he offered his opinion on some of the media’s treatment of Gabby Douglas (“not cool”), Usain Bolt’s casual approach (“If I was going to run the 100 meters, I would not be winking at the camera”), and people claiming that there can only be one “Fab Five” (“Here’s the thing: I DON’T CARE!”). Oh yeah, then we talked about Rick Ross and I learned that Jalen has been in more music videos than all of the Flavor of Love contestants combined.

You can listen to these podcasts on iTunes or on the ESPN.com PodCenter.