Nick Young Is Trying to Kill Me 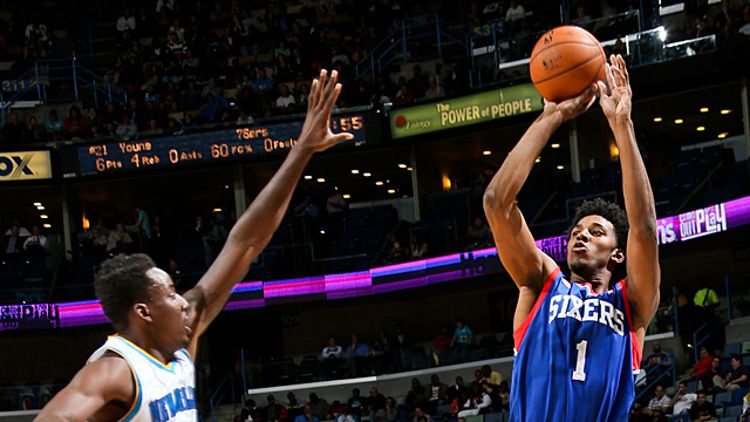 On November 4, in New York, the Sixers lost to the Knicks, 100-84. Nick Young played 32 minutes, scored five points on 2-10 shooting, and had a plus/minus of -29. Minus. Twenty-nine. That’s when it hit me: This is happening. Nick Young isn’t on Twitter or in photos or video lowlights. He’s on the Sixers. He’s a Sixer. He is part of my life now, and like a ghost that haunts your apartment, you need to make peace with these things. So, I decided to live-blog the Sixers game against New Orleans last night. I fully anticipate this to read like a Sullivan Ballou letter from Ken Burns’s The Civil War. Spoiler: That guy dies. Cue up “Ashokan Farewell.” Let’s go.

4:53 — This live blog starts with only about five minutes remaining in the first quarter because time starts and stops with Nick Young’s presence. Nick Young, product of California, cousin of Kendrick Lamar, minimalist defender, maximalist scorer, is in the right corner, alone. No one is guarding him. But then, you wouldn’t guard John Coltrane onstage at the Blue Note, would you? He is rubbing his hands together because he believes in clean energy, and that’s where clean energy comes from. From Nick Young rubbing his hands together. Jrue Holiday sees this and the naked truth is too much to handle so he threads a pass to Lavoy Allen, who is much closer to the hoop than Nick Young. Whatever. A fire will rise.

4:33 — There are 60 people at this game, which makes sense, because of all the things you could be doing in New Orleans right now, why would “watching the Hornets without Anthony Davis” be one of them? I’ll tell you why. Because Nick Young is playing defense. Nick Young’s defensive philosophy is not unlike the West Coast offense in football: He’s just trying to let his playmakers make plays. This requires giving the man he is marking plenty of space. Nick Young’s defense is all about space. Al-Farouq Aminu is in space.

4:15 — Nick Young is back on the right wing. Nobody is guarding him. His hands are raised aloft like some kind of modern-day Paul Revere, screaming, “The Nick Young is coming.” Evan Turner knows a revolution when he sees one and passes to Nick Young. Nick Young misses. The play-by-play announcer says, “Nick Young has come on” and sounds surprised. Hubie Brown says, “the big thing with him is shot selection.” Hubie is the loudest person at this game.

3:00 — Nick Young runs off a baseline screen, curls out to the elbow, and sinks a mid-range jumper. In Tokyo a butterfly flaps its wings. In Brooklyn, a pain shoots through Ray Allen’s ankle. Hubie: “Streaky shooter.” Everything is connected.

2:30 — Jason Smith runs past Nick Young in transition and the two exchange a pained glance and brush up against one another like footmen in the Downton Abbey servants’ quarters.

:20 — Brian Roberts shoots and misses and Nick Young watches the ball career off the rim like a stone skipping across a placid lake and I Google Brian Roberts. Jrue Holiday leads a break, finds a streaking Nick Young on the wing. Nick Young takes a couple of steps, in the same way Eddie Van Halen might crack his knuckles before a solo, and then begins to dribble. He’s called for traveling and ostentatiously chucks a shot up toward heaven. But nobody is up there because if there were a God then how would Nick Young get called for traveling?

On the way back up the floor, Nick Young makes a “my bad” gesture toward no one in particular. We are told Doug Collins is upset at Royal Ivey. This must make Royal Ivey question the very nature of justice in this world.

9:07 — Spencer Hawes looks so much like Jeff Ruland it’s making me feel like I’m on ketamine. I think briefly about horse tranquilizers and realize that Nick Young is no longer on the court. Later I will read that Thaddeus Young came on for him, but I am unable to find any video evidence of this. I need to see the science behind this substitution.

4:25 — Nick Young is back in, and I am back in. Ryan Anderson rolls out of a screen and receives the gift that is mismatch with our protagonist. Nick Young actually bodies up to Anderson and puts a hand in his face while shooting, but it’s all for nothing. All that effort (there wasn’t that much effort), and Anderson buries a baseline jumper. Nick Young drops his head and walks up the court.

4:15 — I don’t want to read too much into minor situations, but I cannot overstate how much Jrue Holiday is passing up chances to pass to Nick Young. Possession after possession go into the annals of time, and Nick Young has nothing to do with them. If we can break away from the mission statement here, let me just say that the Sixers had good chemistry last year, or at least that’s what they sold their fans (I don’t know how good the chemistry can be when you get rid of more than half the team). Over the first three games, even their victory over the Nuggets, the team hasn’t just looked like they were getting to know each other; they’ve looked like they don’t much like each other. They’ve lost Tony Battie, Andre Iguodala, and Elton Brand and replaced them with Kwame Brown, Jason Richardson, and Andrew Bynum. They’ve lost Jodie Meeks and Lou Williams and replaced them with Nick Young and Dorrell Wright. I don’t know these dudes, so I’m not going to guess how they all get along. But the bigger problem is, these dudes don’t know these dudes, and they play like it. Here’s the other thing: How does introducing Andrew Bynum into this situation help things?

3:30 — Nick Young misses a 3. There’s this really good episode of Anthony Bourdain’s No Reservations, set in Spain. Bourdain meets a man named Victor Arguinzoniz who runs a restaurant called Etxebarri in the northwestern part of the country. This guy does one thing — grills food — and he does that thing better than anyone in the world. Nick Young is kind of like this, minus the doing it better than everyone in the world part. He clearly cares only about scoring. I almost admire his dedication. Rebounding, passing, defense, handshakes … none of these things matter as much as having the basketball and scoring it. He doesn’t even seem to really bother moving very much. Watching him stand, grabbing his shorts in boredom or exhaustion, I get lost in the moment, enjoying watching an artist at work, but then he chucks up a 25-footer and bricks it incredibly hard, and the notion that Nick Young will now have a role in deciding the outcome of this game, and almost 80 more like it this season, comes crashing down on me.

1:47 — Nick Young runs up the court and puts his hands up in the air, asking for the ball, and the he runs down the other end of the court, in a straight line, and puts his hands by his sides while his team is on defense. I wish there were a stat for this. I can’t really think of what you’d call it other than “Sofia Coppola.” How else do you quantify ennui?

0:02 — Nick Young takes a last-second shot, holds his follow-through like he’s the Statue of Liberty, misses, wanders off the court, bumping into the referee. Nobody even looks in his direction.

3:34 — Nick Young and Dorell Wright are on the court at the same time.

2:42 — Spencer Hawes harasses a Hornets player into losing possession. Nick Young picks up the loose ball and is fouled by Roger Mason, who denies Nick Young a scoring opportunity. Keep an eye on Spencer and Nick. I feel like they may have a buddy movie in them somewhere.

2:19 — Nick Young misses a 16-footer and then vanishes off my TV screen. I think we’re in purgatory.

1:47 — Nick Young gets an assist on a mid-range Lavoy Allen jumper. Down in the Treme, just me and my baby, we’re all going crazy.

11:35 — Nick Young pump-fakes, goes behind his back, hands it off to Spencer Hawes, bails out of a pick, pops, puts his hands up, stares at Spencer Hawes, and watches him miss a shot. He is removed from the game and will not return. The Sixers wind up winning. I lost.