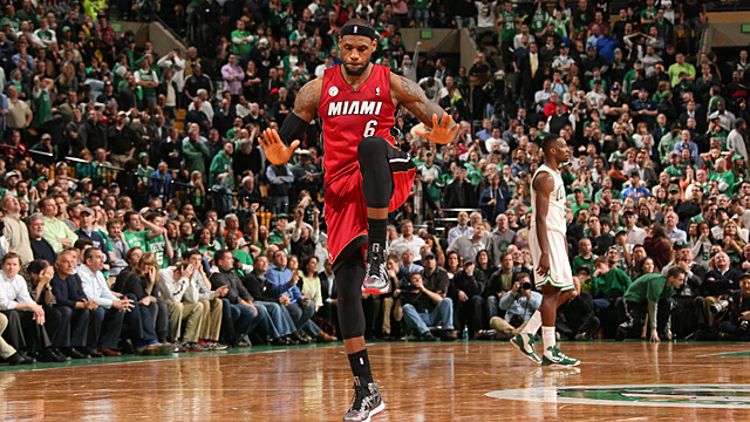 I know that this one came with all the attendant “Here lies Jason Terry/He did the Jason Terry dance/He wore a headband” kind of memorials. But it was just one French horn stab in what was a masterful funeral procession written, composed, and conducted by James at the Garden last night. This dude was responsible for 64 points last night. SIXTY-FOUR. 37 points and 12 assists. He is the engine inside the fourth quarter soul harvester that is the Miami Heat offense. I mean … look at this:

The reason I think people pull for Jeff Green has less to do with his heart, and more to do with his humanity. Yes, his story — returning to the Celtics after having surgery to correct an aortic aneurysm — is the kind of stuff you play Explosions in the Sky over. But what I like about Green, aside from his occasionally devastating inside-outside game, corner 3 prowess, and agile defending, is the breadth of emotion that he expresses. I don’t mean the kind of “taste the rainbow … of death” look LeBron gave Terry last night, but more of an almost palpable nervousness or ambivalence. In a way, it’s almost how I imagine a regular person reacting to playing professional basketball. Especially one who spent most of his waking life having Kevin Garnett tell him he needed to be a repo man of the human soul.

I know there’s no point in analyzing the body language of NBA players, and I know there’s no premium to be put on players who express mumblecore emotions on the basketball court. But it certainly made his 43-point, five-3-pointer, standing-ovation-garnering night just a little more special.

That .GIF (courtesy of @HeyBelinda) pretty much sums up the Suns-Lakers game. I wonder if Steve Nash watches Goran Dragic do that and just wants to go back to the locker room and comb his hair and say lines from All About Eve to himself in the mirror.

@edwardjolmos so say we all!

Picking the Perfect Bracket: Midwest Region (a.k.a. the Group of Death)