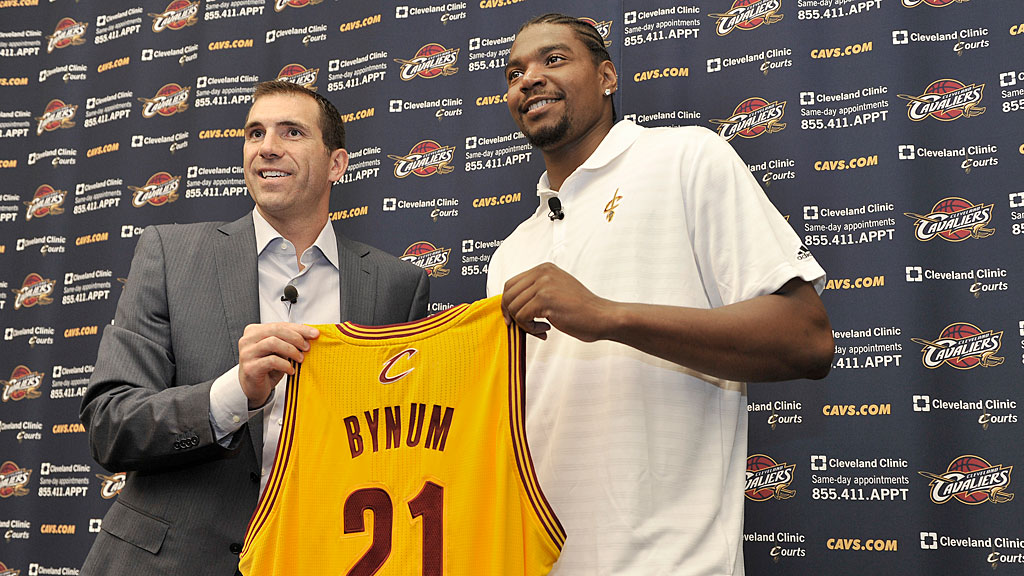 Chris Grant did some good things as general manager of the Cavaliers, a job he got in 2010 after a half-decade of working there under Danny Ferry during those shiny LeBron James days. We won’t hear about those things today, because the Cavs are a dysfunctional stink bomb so smelly that the team elected to fire Grant. The move comes less than 24 hours after the Cavs lost at home to a Lakers team that nearly ran out of players.

The Cavs have lost five straight by double digits, and though this season has seen blips of competence, there have just been too many demoralizing blowout losses in which they’ve looked stagnant and uninterested. I caught them in Philadelphia in early November, just 10 days into the season, and players and coaches were already grumbling about the team’s issues sharing the ball.

So Grant is gone. The bottom line is this: You can’t have four consecutive top-four picks, use two on big men, and come away with just one player, Kyrie Irving, who is a lock to be an above-average NBA rotation guy. You can’t spend three first-round picks on big men, including two of those top-four picks, and end up with precisely zero bigs who look like they could be starters on championship-level NBA teams.

Grant did well in the trades he executed, especially in gathering first-round picks and positioning Cleveland to rebuild after LeBron’s devastating and very public departure. He and his staff just couldn’t do enough with those picks, both in the draft and via trade. The Cavs now have to shift into the franchise’s next phase with just two weeks to go before the trade deadline. David Griffin, Grant’s well-regarded no. 2 guy, will take over the position on an interim basis, but most league observers expect the Cavs to look outside the organization for a fresh leadership voice before next season.

In addition to the front office, the franchise should ask itself whether Mike Brown is the right coach for this next phase of Cleveland hoops. The Cavs have been terrible on both ends of the ball, and they’ve barely improved at all on defense, supposedly Brown’s specialty. The team’s offense has gotten worse under Brown, with predictable sets, poor ball movement, zero reliable post play, and horrific shot selection. You could make a funny highlight reel of Jarrett Jack standing in the corner, holding out his hands to receive a pass that will never come — and continuing to hold the gesture in an exaggerated fashion even after Irving or Dion Waiters has launched a shot. It was Jack’s subtle mutiny, and though he is far from blameless in Cleveland’s awful season, it has been a regular symbol of this team’s dysfunction.

They should have already been wondering about Brown, but he is in just the first year of a mammoth four-year, $20 million contract he signed in the offseason. Grant was working on an expiring deal, making him the easiest and cheapest to fire, and some of his staff might not make it to next season, either.

None of the three alleged “busts” of Grant’s tenure are even 23 yet, so it seems harsh to judge them. And too many people do so without bothering to research what alternatives might have been realistically available to Cleveland at the time. Anthony Bennett has been a disaster and the most blatantly unprepared top pick in at least a decade, but you can’t ignore that he’s coming off shoulder surgery. As a result, he arrived to camp out of shape, and the Cavs have been trying to deal with at least two other medical issues of his: asthma and sleep apnea. Rival executives still see a longtime rotation guy in Bennett, though his NBA start has been discouraging.

Tristan Thompson is a decent player, but his career trend line has plateaued early. He remains an unreliable midrange shooter despite the high-profile hand switch, and though Anderson Varejao has improbably turned himself into a midrange ace, the Cavs have suffered from poor spacing in part because neither starting big man is a feared perimeter threat. Thompson has worked to craft a quirky post-up game of face-up floaters and herky-jerky off-the-bounce stuff, but it’s not a weapon that scares anyone or produces efficient points. He still looks hesitant with the ball, often pausing to bring it down or pump fake himself into an ugly rejection.

Thompson is a mobile defender capable of executing Brown’s aggressive blitzing scheme, but he’s still learning on that end, and he’s never going to be a rim protector. Grant chose him over Jonas Valanciunas, a pick who seemed shaky and impatient the moment it happened. Valanciunas hasn’t lit the world on fire, but his development is going the right way, and his size makes him a potential defensive centerpiece — something Thompson, a great guy by all accounts, will never be.

The criticism of the Thompson pick really ends there. The next set of guys were either busts or point guards the Cavs didn’t need after drafting Irving, and no one was clamoring for the Cavs to select Klay Thompson (no. 11) or Kawhi Leonard (no. 15) in Thompson’s slot. The Cavs probably should have picked Valanciunas, but the Thompson pick was not an indefensible reach.

Waiters hasn’t worked out, either, and the Cavs knew he was a reach at no. 4. He didn’t start at Syracuse, and there were very loud whispers about his negative attitude and off-court behavior well before the draft. But again, of the next half-dozen or so picks, only two, Damian Lillard and Andre Drummond, are playing at a day-to-day level above where Waiters is now. Lillard, of course, plays the same position as Irving. You might prefer Terrence Ross or Harrison Barnes, but there is very little separating any of these guys for now. Drummond is the one that got away, that one-missing-piece big man, but he got away from lots of teams.

Waiters is clearly skilled, and some team will take a shot at him if the Cavs go into full rebuild mode over the next two weeks. He can get to the rim with an off-the-dribble game featuring both power and tricky changes of pace, and he is a decent jump-shooter hitting an above-average mark from deep this season. But he just has some of the worst judgment in the NBA. He takes horrible shots, breaking plays early in the shot clock to launch off-the-bounce 20-footers. He might be the worst perimeter transition defender in the league, standing like a statue to admire his misses as entire teams leak out behind him, though most young players struggle on defense.

Had Grant nailed just one of these three picks, he’d probably have his job now. The Cavs might not be all that much better, but they’d be happier, with a clearer road map to improvement.

And again: Grant did well on the trade market. He fleeced the Kings for a first-round pick in the J.J. Hickson–Omri Casspi deal, and he used that pick to land Luol Deng. He coaxed an unprotected first-round pick from the Clippers in exchange for taking on Baron Davis’s contract, and that pick ended up being the one that got them Irving. (Fun fact: I was in the lottery drawing room the next season, and the Cavs were one number away from winning the lottery for the second straight year and getting Anthony Davis.)

He snagged a first-round pick for Ramon Sessions, though he paid a heavy price to do so in absorbing Luke Walton’s contract. He snagged an attractive first-rounder from Memphis last season — the only first-rounder to change hands at the trade deadline — by allowing the Grizz to use Cleveland as a salary dumping ground. He beefed up Cleveland’s analytics department, turning it into one of the largest in the league.

All those draft picks just never became anything that good. A segment of the front office pushed Grant hard to make a run at James Harden before last season, using a combination of picks and any Cavalier other than Irving. Grant resisted, and he has generally been known around the league as a difficult sort to deal with. Executives on other teams lament that Grant overvalues his own players to the point of paralysis, and that could have prevented the Cavs from throwing their hat in the Harden ring. Who knows how many Varejao-centric deals the Cavs didn’t even consider due to their (justified) love of Varejao, even as his age and skill set no longer fit as snugly within their rebuilding timetable?

Grant tried to accelerate that timetable by signing Andrew Bynum and splurging on Jarrett Jack, but Dan Gilbert, the team’s owner, played a role in that acceleration. Ownership made no secret of its desire to make the playoffs this season, and league sources say Gilbert was the driving force behind the Bynum signing. The Jack signing was an overpay, especially since the Cavs already had two ball-dominant guards on the roster, though at least the fourth year is almost fully unguaranteed. But Jack is a minus defender who needs the ball, and he just hasn’t fit on this team.

The Deng trade was understandable given the pressure on Grant to win now, and the giant pile of bricks previously manning the small forward position. But Cleveland gave up a lot to get him, especially since it was offering Chicago massive financial relief by sending the Bulls Bynum’s nonguaranteed deal. Deng hasn’t yet moved the needle for this team, in any way, and has struggled at times to pick up Brown’s defensive scheme — which is very, very different from Tom Thibodeau’s in Chicago.

Any GM fortunate enough to have a job for several seasons will end up with a spotty record, but the returns so far on Grant’s draft picks and free-agency signings just haven’t been good enough. (Props for spotting Alonzo Gee, though.) The misses outweigh the hits.

So, what should Cleveland do now? There will be noise about trading Irving, but I wouldn’t go there. Irving still has star potential, and all the chatter about him wanting out of Cleveland means nothing unless he’s willing to sign a short extension (as LeBron did) or even take the one-year qualifying offer in restricted free agency (something no star player has ever done). The Cavs control the situation, and though Irving has belched out a so-so season, they should be in no rush to deal him. Ditto for Waiters, Thompson, and Bennett. The Cavs are still slated to have very nice cap flexibility going forward, depending on what they do with Deng in the offseason, so they have no urgent need to sell low on any of their young guys. If they can get a first-round pick with only some protection on it, then, sure, think about dealing Waiters and his attitude issues. But otherwise, try like hell to dump Jack, test the market for Varejao and Deng, and keep the roster young and flexible.

Rebuilding in the NBA is hard. You need luck, along with hard work and skill. The Cavs just need to keep at it.