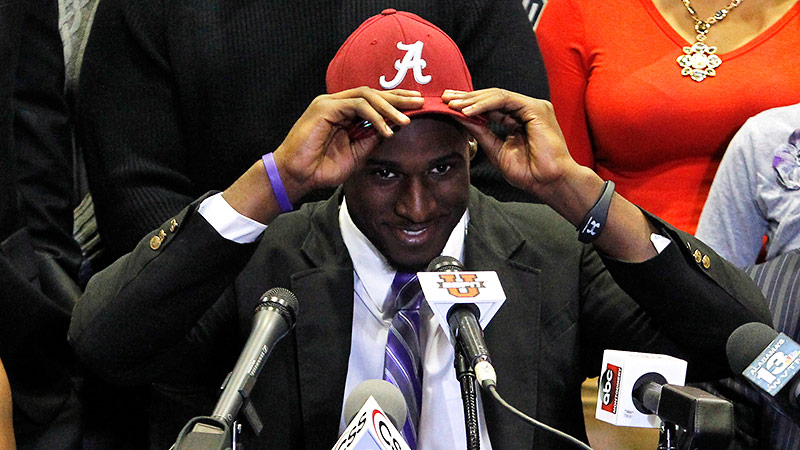 Well, Alabama got its three-peat after all. While the Crimson Tide’s quest for a third consecutive national championship fell short, Nick Saban’s squad managed to once again land the nation’s top recruiting class. LSU, Florida State, Texas A&M, and Tennessee rounded out ESPN.com’s top five, and a cast of usual suspects* took what was left, increasing the odds that 2017’s final AP poll will look a lot like 2013’s.

But this isn’t the time to fret over Saban’s continued march toward world domination, or to lament that your alma mater’s chosen means of coach transport can’t compete with Kevin Sumlin’s Swagcopter. It’s a time to celebrate the beauty pageant/meat market that is National Signing Day, which delivered another great show for college students and 9-to-5ers looking to kill time on the Internet between fantasy football season and March Madness. The day was full of caffeine highs and embarrassing lows, and we’re here to capture the best and worst with some NSD honors. Black tie optional, but please avoid wearing orange; we saw enough of that yesterday thanks to Butch Jones’s 36-player crew.

It was thoughtful of Auburn to post four-star linebacker Rashaan Evans’s bio on the school website yesterday. After seeing their team lose the BCS title game in heartbreaking fashion, the Tiger faithful must’ve been incredibly excited to read up on their new hotshot recruit, especially since he was a local kid, an Auburn native who surely despised the Crimson Tide with every fiber of his being. They had to find it funny when the so-called “experts” suggested that Evans might wind up at Bama. What did these recruitniks know about War Eagle? Hell, the only reason Evans took an official visit to Tuscaloosa in the first place was to perform a top-secret recon mission for Coach Malzahn. That’s a fact, and you can look it up in The World Almanac.

and now the hyperlink leads to this so it is now down pic.twitter.com/ZbmYjb72bN

Surely it was a practical joke when Evans donned a Bama cap at his signing-day ceremony mere minutes after his bio appeared on AuburnTigers.com. A joke, or a long con. I mean, the kid taking credit for getting Evans to pick Alabama has an Auburn tattoo and made last year’s most infamous recruiting flip. Forget thoughtful. Auburn is flat-out trolling. I’m on to you, Gus.

USC’s class ranked a pedestrian 24th entering Signing Day, but finished 14th thanks largely to five-star corner Adoree’ Jackson and four-star athlete Juju Smith pledging their undying loyalty to the Trojans during two of Wednesday’s most high-profile announcements. Jackson made his choice in the most excruciating way possible for LSU and Florida fans, emptying the contents of a shopping bag one by one, and saving his USC hat for last.

Things got weird on Wednesday evening, when reports surfaced that Jackson had yet to fax USC his letter of intent, potentially because his dad was pushing hard for LSU behind the scenes. But Jackson’s dad dispelled these rumors to ESPN.com’s Mitch Sherman, who tweeted that Jackson’s letter of intent would be faxed “soon,” which in this case meant two hours later. If Jackson’s dad pops up in a Cecil Newton–type scandal three years from now, remember this moment. Until then, Steve Sarkisian is in great shape.

When we last left McDowell, the nation’s fifth-best defensive tackle prospect, he was embroiled in a very public dispute with his parents over whether he would choose Michigan State on signingday. The drama was supposed to end Wednesday morning, and for a few glorious hours, it seemed like it had: McDowell declared his decision to play for MSU and signed what looked to be a letter of intent, reportedly with “a public blessing from his father.” So that settled that, right? WRONG.

MSU hands out its list of 2014 recruits and Malik McDowell is not included.

Either McDowell signed a blank “ceremonial” letter of intent and hasn’t gotten around to signing the real one yet, or he signed the real one but is waiting to fax it to East Lansing. Whatever the case may be, we’ve got to assume his parents are using the extra time to talk him out of becoming a Spartan. His dad’s on the record as wanting him to go to Ohio State, and the longer this saga drags on, the more likely it is that Papa McDowell will get his wish.

Your Reminder That Realignment Happened

When four-star offensive tackle Damian Prince signed with Maryland, I instinctively grouped him with five-star Virginia signees Andrew Brown and Quin Blanding as players who prioritized staying close to home over winning national championships, even if doing so meant playing for a mediocre ACC squad. Then it hit me: Maryland and Virginia are no longer kindred spirits in ACC mediocrity. When Prince picked his hometown Terps, everyone started tweeting about what a big get it was for the Big Ten. Life is weird, and realignment is the reason why.

But no matter: Realignment can’t erase the 2010 Ralph Friedgen–Mike London instant classic from our memories! And good on Randy Edsall for locking up that in-state talent. If Maryland’s high school football scene were half as competitive as Texas’s, the Terps would be perennial title contenders.

Ah, the Petrino Effect. RT @laurakeeley: Per Rivals, Louisville will have the lowest ranked class in the ACC, behind Duke and Wake Forest

In Tuesday’s Signing Day primer, I claimed that Juju Smith had the Class of 2014’s coolest name. It turns out that couldn’t have been further from the truth. Eastern Michigan signed a player named Lion King. I repeat: LION KING. In my defense, he’s not listed in ESPN’s recruiting database, but there’s no excuse for not knowing about a stud defensive end named Lion King. Read all about Mr. King here, and purchase season tickets for Eastern Michigan here.

Fun fact: Lion King was McDowell’s high school teammate, so we know for a fact he wasn’t the most indecisive person to start on the Southfield defensive line.

We Are the Muschampions, My Friends

Give credit where it’s due: Will Muschamp is a helluva salesman. You may recall that Muschamp braved some extremely treacherous conditions last week to visit five-star defensive end Lorenzo Carter. While those advances ultimately proved futile with Carter, who became a Georgia Bulldog on Wednesday, this same relentless recruiting style is what led dual-threat quarterback Treon Harris, a one-time Florida State commit, to undergo a last-second change of heart and sign with the Gators instead.

Lord knows why a high school quarterback would pass up the opportunity to play for Jimbo Fisher, especially when the alternative is Muschamp, who treats offense as a necessary evil and may very well be looking for work in 2015. I guess it’s more appealing to play behind Jeff Driskel than Jameis Winston.

Admit it: The whole hat thing is totally played out, and you’d much rather see recruits use plants to reveal their college choice. While this wouldn’t make much sense in most cases, Stanford is a notable exception. Enter four-star defensive end Solomon Thomas, who pulled out a goddamn mini evergreen tree to inform viewers he was Stanford bound. He even added a pair of Shayne Skov/Harry Potter glasses. Thomas is your new favorite player, America. Well, after Lion King.

*The Usual Suspects and … Kentucky?

Holy hell! Kentucky landed the nation’s no. 20 recruiting class. For FOOTBALL. Mark Stoops deserves all sorts of credit, but it’s hard to see this and not wonder if the Earth is off its axis. I don’t know how and I don’t know why, but I’m sure Lane Kiffin is to blame.