My Brother’s Keeper: The Sad Fate of Marc Gasol 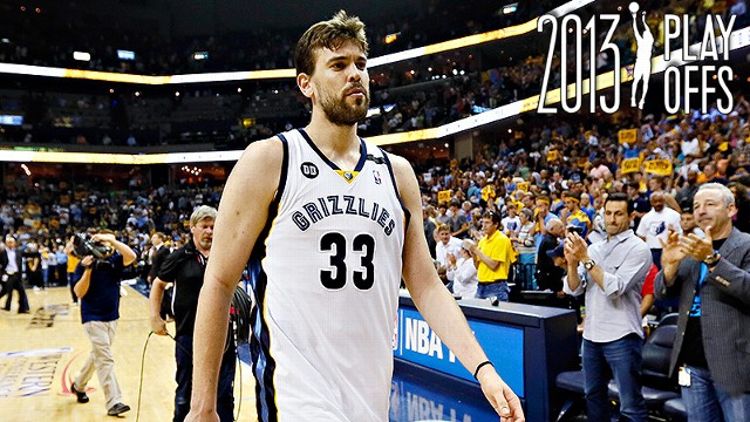 Why did everyone want to believe in the Memphis Grizzlies? It was an unlikely collision of forces that led us from “praising the Grizzlies for what they actually are” to considering them legitimate title contenders. It helped that they played two broken, battered teams in the Clippers and the Thunder before moving on to the Western Conference finals. Zach Randolph’s career resurrection is a great story that commentators seem to frequently celebrate. The Grizzlies’ “grit and grind” style of play appeals to nostalgic NBA analysts who overrate the idea that the ‘game slows down in the playoffs’ even though generating crunch-time points from the post has basically never happened. The Grizzlies are certainly dissimilar from basically every other team in the league due to their “twin towers” model, but offenses dependent on post play have become too stagnant and predictable. Still, there is one very big reason some believed in Memphis.

Marc Gasol is the NBA’s best center. Though, you could argue that’s only because he is the last “true center” left in the league, with a skill set and physical stature that recalls an era when big men of his kind were centerpieces. Back before small ball diminished the necessity of a strong post presence in your offense, a highly skilled and cerebral center could make your team unstoppable. As the Grizzlies ponder their elimination at the hands of the Spurs, it is odd to find Marc Gasol in a situation not unlike his brother Pau’s tenure in Memphis.

The 2003-04 NBA season marked the first time that the Memphis Grizzlies made the playoffs, winning a then-franchise-record 50 games. Whenever I think of that team, I picture Pau Gasol toiling away without much help. But that isn’t right; in reality, that was a promising situation. The team was helmed by “feel-good story” Hubie Brown, the head coach, who implemented a 10-man rotation with strict limits on players’ minutes. Brown finally got Jason “White Chocolate” Williams to “play the right way,” facilitating the strong play of Mike Miller, Shane Battier, and James Posey, and even the briefly reformed Jail Blazer Bonzi Wells.

The Spurs swept that team in the first round of the playoffs. Brown abruptly retired from coaching in the middle of the next season, and he was replaced by another prominent NBA announcer, Mike Fratello. While the team made the playoffs that season, it was again swept in the first round by the Suns. In 2006, the Grizzlies dealt Shane Battier to the Houston Rockets for rookie Rudy Gay and Stromile Swift. The Grizzlies had plateaued, another one-and-done playoff team. Pau Gasol was shipped to the Lakers in 2008 in an “unfair” trade that included Kwame Brown and the rights to an unknown Gasol brother.

Five years later, no one has issues with the Gasol brothers trade. Pau won two titles with the Lakers and Marc eventually became the best Gasol in the NBA. But if you look at the young core that Pau Gasol had to work with in 2003, it is difficult to justify a situation in which it took nearly a decade for another meaningful Grizzlies playoff run. The challenges of acquiring complementary talent for a small-market franchise have further intensified under new luxury cap rules, and the decline of Randolph’s useful life in the modern NBA could waste the next two years of Marc Gasol’s career.

In the Western Conference finals, the Grizzlies were exposed by the Spurs, a veteran team that has had to assume an amorphous identity to avoid playoff matchup problems. The Spurs preyed upon the Grizzlies’ flawed twin towers model. Other than Gasol, it felt as if the Spurs were playing against an aggregation of one-dimensional role players. They all had just about one strength, but nothing that could single-handedly alter the outcome of one game, much less the series.

Marc Gasol now finds himself in a situation similar to his brother’s Grizzlies existence. The current Grizzlies supporting cast consists of the past-their-prime, wing-defending former champions Tayshaun Prince and Tony Allen. Neither can shoot the 3 efficiently enough to create space for Gasol and Randolph to operate in isolation in the post. Given the spatial issues with this team’s offense, I’m not sure how Mike Conley was able to have such a productive season without praising Marc Gasol even further.

At the beginning of the Grizzlies-Spurs series, there was talk of Conley playing Tony Parker to a draw. As the series evolved, it became clear that Parker was still on a different level than Conley, a middle-of-the-pack point guard. This should be a troubling revelation for Marc Gasol, but that’s what happens when you are finally the best player on your team. You can see all of your teammates’ ceilings from above, while still ascending toward your own. Due to salary-cap constraints, the core of his team won’t change much over the next two seasons barring a franchise-altering trade. His brother Pau could’ve stayed in Memphis to achieve a similar outcome. Instead, he found his appropriate place on a championship team; he had to accept the role as the second-best player on a more complete roster.

In the small-ball era, it is necessary for teams to have an athletic rim protector to complement active wing defenders. Marc Gasol and Randolph occupy physical space in the lane when they are matched up against two similar players, but their lateral foot speed makes them liabilities when they aren’t actually guarding post players. The Spurs’ pick-and-roll offense, complete with the necessary 3-point threats, minimized Gasol’s and Randolph’s ability to affect a game defensively. It doesn’t help that Randolph, the highest-paid player on the team, cannot jump.

Centers are no longer the centerpiece of the NBA’s championship contenders. They remain a significant classification, but as the Miami Heat have proven, they can be rendered obsolete with proper offensive and defensive scheming. You know things have changed when Birdman has become a relevant figure in the 2013 playoffs.

The Spurs don’t even have the most athletic big men in the league. Tim Duncan, Tiago Splitter, and Boris Diaw have the size and length to make things difficult for Gasol and Randolph to be productive, but on the offensive end, they only enter the post when there is a clear mismatch to be exploited. People may remember Duncan’s youth as an unstoppable post presence, but he commands fewer double-teams than ever; Duncan’s had to severely reinvent his game in recent years. Don’t expect Randolph to make the same career move.

The 10-year rebirth of the Grizzlies since the Pau Gasol trade has been a fun story for a small-market team, but given the current construction of the team’s roster, it has only taken them to a slightly elevated plateau. The NBA Defensive Player of the Year has been swept out of the playoffs. His team likely would not have advanced past Russell Westbrook’s Oklahoma City Thunder anyway. Without significant changes soon, it appears Marc Gasol will have inherited all of the Grizzlies’ problems that his brother left behind. Marc Gasol’s contract expires after two more seasons. Will the Grizzlies have the tradable assets, salary-cap flexibility, and an influx of young talent to prevent the loss of another Gasol? Should he wait to find out?

We Went There: The Spurs Grind Out a Sweep at the Grindhouse