Most Hated College Basketball Player, Day 2: Does No One Hate Patrick Ewing Anymore? 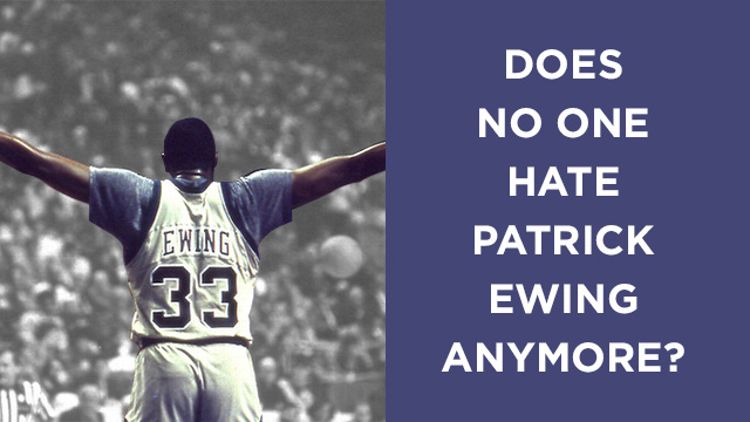 I have a confession — and that is, in most ways, I am wholly unqualified to write this. One day into our bracket to determine the most hated college basketball player of the past three(-ish) decades, and Patrick Ewing, the ’80s no. 1 seed, is done. The Grantland staff is full of Big East lifers who had a disdain for those Georgetown teams and Ewing’s college career. I did not — mostly because I was born more than two years after it ended. My sole connection to the 1985 NCAA tournament is that I count Rollie Massimino’s grandson among my close friends. That’s about where my Georgetown familiarity ends. And actually, I think that’s sort of the point.

Ewing lost to BYU Cougar–Boston Celtic–towel thrower Danny Ainge, and it was convincing. Ainge handled Ewing by more than 1,500 votes, and in doing so, helped reveal a few things about how sports hate lives and grows. Ainge’s victory is enough to draw a distinction about who figures to win these matchups going forward — not the player who was more hated, but the player for whom we still carry the most hate.

Ainge’s college career was a magnificent one, including an Elite Eight run and the Wooden Award in 1981, but his place in the collective sports conscious was almost nonexistent compared to Ewing’s. Ainge’s detestability festered during his pro days in Boston more than his milk-drinking days at BYU, and it’s as the villain on one of basketball’s most famous teams that he’s remembered. As a pro, Ewing was merely a very good, very sweaty 7-foot Knick.

In college, though, Ewing received the sort of scorn that most players could never imagine. From the Washington Post in February, 1983:

At Providence nearly a month ago, a fan raised a sign that said, “Ewing Can’t Read,” and Coach John Thompson pulled his Georgetown basketball team off the court until the sign was taken down.

Nine days ago at the Palestra in Philadelphia, Villanova fans held up several similar signs. One raised bedsheet read, “Ewing Is An Ape.”

During pregame introductions that same day, a banana peel was thrown at the court when Ewing’s name was announced. This was 30 years ago.

The racism can probably be considered the extreme actions of a select few, but it speaks to how polarizing that Georgetown team was throughout the mid-’80s. If a large enough portion of the population has an opinion about something, the fringes of that population probably include those whose feelings are not bound by rationality. The Hoyas were a national phenomenon, and solely by virtue of how many people cared about each, more people hated Patrick Ewing than hated Danny Ainge. It’s just that not as many people went on doing it. Maybe people just really hate T-shirts.

The passage and effects of time played just as large a role in Day 1’s second-biggest upset, where Austin Rivers pulled out a win over Danny Ferry in the Duke region. To the Facebook users of America, Austin Rivers’s hateability is fresh. He’s the son of a coach, had a game that’s not easy to love, and walks around with one of our country’s most punchable faces. Danny Ferry is the general manager of the Atlanta Hawks.

What most of the Facebook users probably don’t remember is that without Danny Ferry, there probably isn’t an Austin Rivers, or a Christian Laettner, or a J.J. Redick — at least not in the way we know them. Ferry was the original symbol of Duke hate, one of the nation’s best players who had a reputation for being dirty and getting away with it. In a 1987 game against Virginia, the Cavaliers’ Tom Sheehey (Will Sheehey’s uncle! It does not skip a generation) was ejected after responding to a Ferry low blow with an elbow to the face. When asked about it by Sports Illustrated’s Curry Kirkpatrick, Ferry responded, “I might have popped him too low, but Sheehey was the most hated guy in the ACC. He was old news.” OLD NEWS. Billy King, a teammate, addressed Ferry’s style thusly: “Danny’s no dirtier than anybody else I’ve played against.” Sounds like a glowing endorsement.

The hate for Rivers, ironically, spawns from both his style and success in Durham running counter to the Duke aesthetic. The hate for Ferry is that he helped create it. I’d be more inclined to mourn his demise if Christian Laettner wasn’t worse better in every way.

About Last Night: Fear the Bulldog