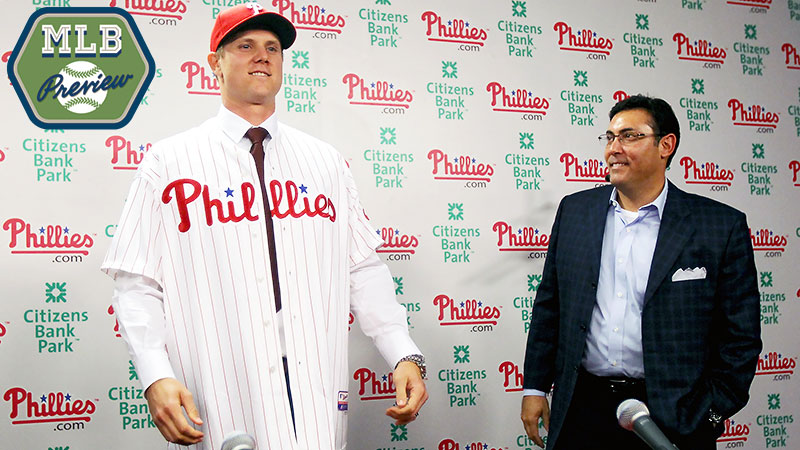 After the 2008 season, Ruben Amaro took over the reigning World Series winners, a team stocked with numerous All-Star-caliber position players, one of the best young starting pitchers in baseball, a huge payroll, a burgeoning farm system, and sole possession of the fourth-largest media market in the United States.

Perhaps aware that having Cole Hamels, Ryan Howard, Jimmy Rollins, Chase Utley, Ryan Madson, Shane Victorino, Jayson Werth, and Carlos Ruiz all hit their late twenties together was a once-in-a-career opportunity for a GM, Amaro went all in, displaying a win-now aggressiveness unparalleled in baseball.

Some of his moves worked. Roy Halladay won a Cy Young award, Cliff Lee came close, and Roy Oswalt was the best no. 4 starter we’ve seen in generations. In the first three years of Amaro’s tenure, the Phillies won another pennant and finished with the best record in baseball twice. If you’re going to blame someone for the Phillies’ failure to win another title from 2009 to 2011, Amaro falls somewhere between the St. Louis Rally Squirrel and Cody Ross (spelled to this day in Philadelphia with a certain infixed sexual participle: i.e. “Cody F. Ross”) on the list.

Other moves didn’t work out so well. Howard’s contract extension is still deservedly mocked. Amaro’s Phillies gave up a draft pick to sign the aged Raul Ibanez to a three-year contract. They gave up another draft pick to overpay Jonathan Papelbon outrageously, even though they could have waited a couple of weeks for the new CBA to come into force and not given up that pick. They doubled down on raw, toolsy high school talent in the draft, and were taken to the cleaners. Amaro cost himself tens of millions by waiting until the eleventh hour to sign Hamels to a contract extension in July of Hamels’s walk year, instead of two or three years earlier.

Then there’s Hunter Pence, who’s like a World War II submarine to an elevated BABIP’s diesel fuel. If Pence is getting batted ball luck, he’s an unparalleled killing machine. If he’s not, he sinks slowly to the bottom of the sea, dying either from drowning, hypothermia, or his body being crushed agonizingly by the inexorable pressure of the sea. And nobody ever finds the remains.

All told, Pence was probably not worth Jarred Cosart (who’s contributing for the Astros and would be doing the same for the Phillies), Josh Zeid (ditto), Jonathan Singleton (who’d probably be in a dead heat with Maikel Franco for best prospect in the Phillies’ system), and Domingo Santana (who would be their top outfield prospect in the upper minors, because, well, the Phillies don’t have any others). Not when acquiring Pence and demoting Domonic Brown instead of benching Ibanez meant a marginal upgrade in right field while stunting development for Brown for another year. 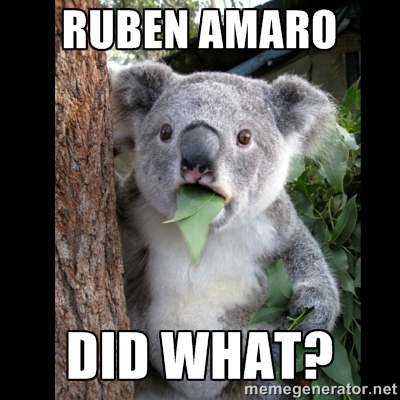 This has all been a very long way of saying that Amaro has a reputation as the worst GM in the league, or at least close to it. And he deserves it. A litany of bizarre offenses — including publicly thumbing his nose at industry standard analytical practices as if he’s intent on turning the Phillies into baseball’s North Korea, ratting out unsigned draftee Ben Wetzler to the NCAA, and so on — haven’t helped.

But while I’d never insinuate that Amaro has turned into Jon Daniels, it is worth noting that the Phillies GM has done something funny since trading for Pence: He hasn’t really done anything wrong.

Everything went completely downhill for the Phillies in mid-2012. Well, everything started to go wrong in 2010, but the team didn’t feel the effects until 2012, so nobody said anything until then. When that happened, Amaro immediately shifted into rebuild mode. He got what he could for Victorino, Pence, and Joe Blanton rather than lose them for nothing. He reinstated Brown to the starting lineup, and Brown has turned into a solid everyday player — the first time a homegrown Phillie has done that since Ruiz in 2006, if you want an idea of how little the farm system has contributed. Amaro sold high on Vance Worley in a challenge trade with the Twins and got a pretty good young center fielder for a pitcher whose arm was about to come off. Amaro hasn’t, as many feared, tried to stave off collapse by overpaying for old and ineffective free agents with draft picks tied to them.

Since Amaro hasn’t completely blown up the team, he’s taken some criticism for signing Marlon Byrd and A.J. Burnett to stay closer to 80 wins than 60. But those moves are different from what the GM did years ago, when he got way out in front of the market to pay too much for Papelbon, Ibanez, and Placido Polanco. Byrd and Burnett are on short-term deals to fill positions where there isn’t really a homegrown alternative. Burnett stands to throw 200 innings this season, some of which might have gone to up-and-coming talent if Ethan Martin and Adam Morgan hadn’t gotten hurt, but they did. And it’s not exactly reasonable to complain about Byrd blocking the next generation of Phillies outfield talent when Carlos Tocci isn’t old enough to buy cigarettes outside his home stadium.

The easy joke is that Amaro is still stockpiling old players, and it’s true. But these old players aren’t hamstringing the team’s payroll until the 2020s, or costing the Phillies draft picks, or blocking young talent. Amaro adjusted his strategy the moment it became clear that the core that won 473 games and five division titles from 2007 to 2011 couldn’t compete anymore, and all that remains is to run out the clock until Howard and Papelbon clear $35 million of payroll and the next core — Tocci, Franco, Jesse Biddle, and others — is ready to contribute.

And for all the pearl-clutching about the damage the Wetzler Affair would do in draft negotiations, or what recent attempts to gaslight a franchise icon into leaving town in the waning moments of his career would say to potential free agents, money still talks, and the Phillies are going to have lots of it in a couple of years. Odds are that there’s no behavior deplorable enough to keep draftees and free agents from signing if the price is right.

That’s going to take time. And if, in that time, the Phillies’ owners want to spend a little more to avoid triple-digit losses, it won’t hurt the franchise that badly.

1. The dark days of 2012-14 didn’t happen because of anything Amaro did or didn’t do after 2012. The time to prevent what we’re seeing now passed years ago.

2. A complete overhaul takes time. The Phillies haven’t been this bad, and this poor in major league–ready prospects, since the late 1990s. This didn’t happen overnight, and it also can’t be fixed overnight.

It says something that Amaro’s reputation is such that “he hasn’t actively made things worse” clears the bar of expectations, but he hasn’t, and it does. If he continues to not make things worse, the Phillies will start to trend upward in a year or two. And if that happens, Amaro’s patience will likely save his job, which no longer sounds like the worst-case scenario it did two years ago.

Who's That Guy? UCLA's Kyle Anderson!